Mid-nineteenth century schools such as the one that stood at this spot in Powdersville tended to be small, serving families within walking distance. As a result, it wasn’t unusual to have a few schools operating within three or four miles of each other. During this era a school called Cedar Wreath was built on the wooded location now occupied by this marker. Some records claim it was built between 1844 and 1852; the marker below states that the school was established in 1857. The school was said to have been rectangular with a fireplace on one end and doors and windows on each side. Built of planks, the first Cedar Wreath School had a tongue-and-groove floor. A mobile blackboard was made of poplar and painted black. The building was later enlarged to accommodate more desks. 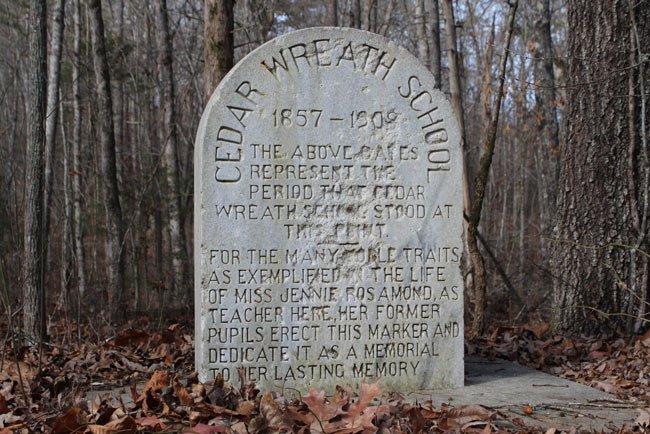 Esther Fogle of Powdersville, 2016 © Do Not Use Without Written Consent

Cedar Wreath School was initially private, with local parents paying tuition in order to compensate the teachers. However, families of little means were also able to send their children to Cedar Wreath, paying what they could – which may have been nothing at all for some – and often families of greater income would supplement the teachers’ salaries if necessary. Tuition was also paid through labor and food, and at times teachers would accept payment through room and board in the homes of locals. The school eventually became part of the Anderson County school system.

The first building to house Cedar Wreath School burned in either 1894 or 1896 or both; records vary. The school was rebuilt, but after another fire in 1908, the school ceased to exist. Students of a beloved Cedar Wreath teacher, Jennie Rosamond, erected the above marker in her honor. It reads:

Cedrar Wreath School – 1857-1908 – The above dates represent the period that Cedar Wreath School stood at this point – For the many noble traits as exemplified in the life of Miss Jennie Rosamond, as teacher here, her former pupils erect this marker and dedicate it as a memorial to her lasting memory

The school is said to have received its unusual name when the queen of a local May Day festival, Fannie Campbell, commented on the festival’s decorations of cedar wreaths. 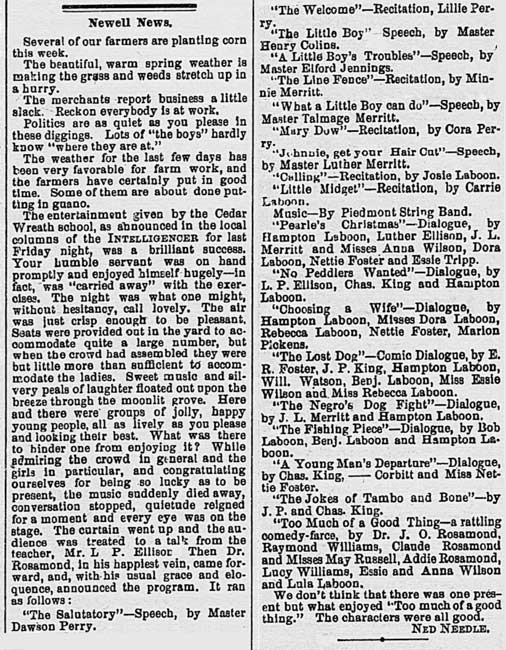 A story from a March 28, 1894 edition of the Anderson County Intelligencer tells this story from Cedar Wreath School:

The entertainment given by the Cedar Wreath school, as announced in the local columns of the Intelligencer for last Friday night, was a brilliant success. Your humble servant was on hand promptly and enjoyed himself…The night was what one might, without hesitancy, call lovely. The air was just crisp enough to be pleasant. Seats were provided out in the yard to accommodate quite a large number, but when the crowd had assembled they were but little more than sufficient to accommodate the ladies. Sweet music and peals of laughter floated out upon the breeze through the moonlit grove. Here and there were groups of jolly, happy young people, all as lively as you please and looking their best. What was there to hinder one from enjoying it? While admiring the crowd in general and the girls in particular, and congratulating ourselves for being so lucky as to be present, the music suddenly died away, conversation stopped, quietude reigned for a moment and every eye was on the stage. The curtain went up and the audience was treated to a talk from the teacher, Mr. L P. Ellison. Then Dr. Rosamond, in his happiest vein, came forward, and, with-his usual grace and eloquence, announced the program.”