The congregation of Pelzer Presbyterian Church dates from 1883, although it had its roots in the Union Sabbath School, formed in 1881. The church, pictured below, dates from 1896. 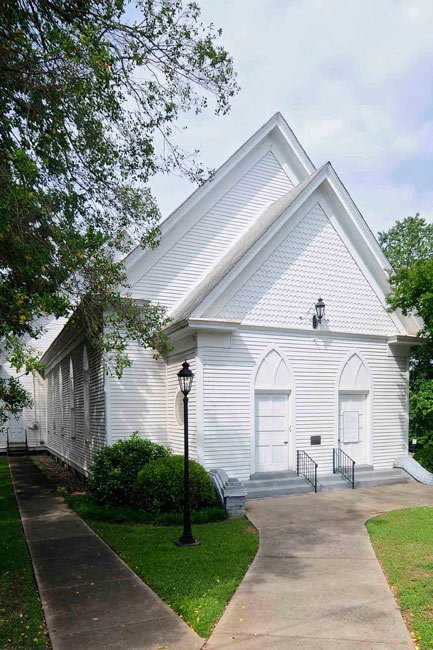 The Pelzer Presbyterian Church is listed in the National Register\:

Pelzer Presbyterian Church is exemplary of the small, late nineteenth century frame gable-front form favored by many conservative denominations throughout South Carolina. The church was one of five sanctuaries constructed in the town in large part with funds donated by the Pelzer Manufacturing Company and is the only one of the original five churches still standing. The sanctuary, built in 1896, is significant as an excellent example of the late Victorian Gothic Revival style rendered in a modest vernacular interpretation. The church features impressive stained and leaded glass windows throughout the nave and is further distinguished by a projecting vestibule with tongue-and-groove wainscoting and lancet shaped doorways. The main block of the church building follows a traditional rectangular form with a gable front roof and is sheathed in weatherboard. A gable roof vestibule projects from the façade. The vestibule is articulated by shaped wood shingles above paired entrances rendered in a Gothic arch design. A two-story, five-sided Sunday school classroom was added in 1905. It is a definitive example of the “Akron plan,” a popular turn of the century concept designed to maximize the teaching of Sunday School classes. The church is representative of the small town, late nineteenth-century churches which served both rural and town congregations throughout the state.