Also known as the Hilton Head Rear Range Light, this tower served as part of a lighthouse system that was constructed in 1880 to guide ships into the Port Royal Sound. Located on the former Leamington Plantation, the front and rear range lights replaced a set erected on the island by the federal government in 1863; those lights were discontinued after suffering storm damage in 1869. 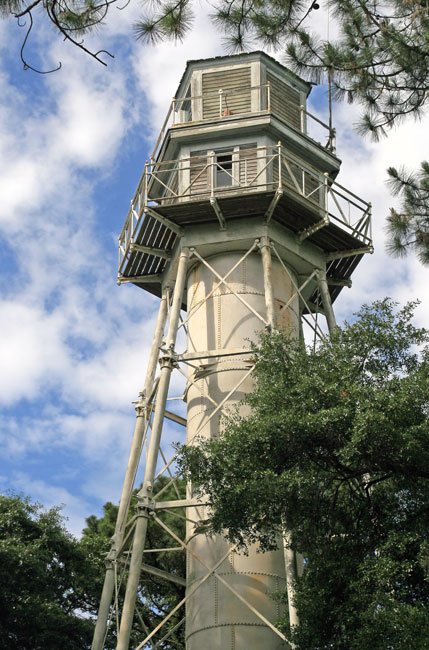 The system’s front range light was built atop of the keeper’s dwelling, and the rear light was affixed to a 95-foot-tall iron tower located one and a quarter miles from the front light. A second dwelling was also built near the rear range light. The lights were designed so that the lower front light could be seen aligned with the taller rear light when vessels were properly positioned. The lights, which were both originally red, could be seen for fifteen miles. On February 1, 1888, the front light was changed to white. Both lights were Hains oil lamps until replaced with Funck-Heap lamps in 1893. 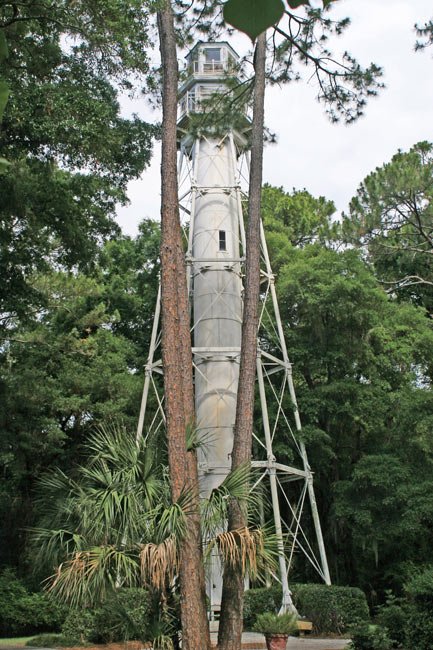 Due to the natural shifting of the sands, the front light was replaced in 1884 by a 31-foot-tall moveable light to maintain proper navigability of the channel. This new light was moved several more times to accommodate the changing landscape, in 1887, 1891, and 1897. The front range light was changed to acetylene in 1915, and both lights were decommissioned in 1932. 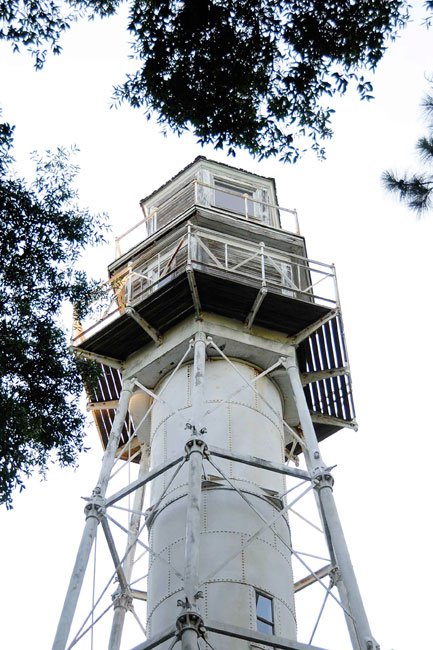 The area surrounding the lighthouse was used as a Marine camp, Camp McDougal, during World War II. The land was eventually sold to private developers, and in the 1980s the rear range lighthouse became a landmark on the Arthur Hills Golf Course within the Palmetto Dunes Resort. The front light is no longer extant, though the front and rear keeper’s dwellings were moved into town and are now used as businesses. A brick oil house built in 1892 near the rear range light remains in its original location.

The Leamington Lighthouse is listed in the National Register as the Rear Lighthouse of Hilton Head Range Light Station:

(Leamington Lighthouse) The Rear Lighthouse of the Hilton Head Range Light Station was constructed by the United States Lighthouse Board in 1879-1880 as part of a system of lights and beacons to guide shipping in Port Royal Sound. The lighthouse is significant as one of the few surviving lighthouses in South Carolina, and as the only one of its type remaining in the state. The Rear Lighthouse and a small brick oil house survive of the complex, which originally included a keeper’s house and a forward beacon, which was mounted on a second keeper’s house. The lighthouse consists of a cast iron skeleton, a cylindrical stair tower, and a wooden watch room and lantern room structure. The tower was originally sheathed in wood; sheet steel sheathing was added, probably in 1913. The hexagonal watch room is at the top of the stair and the skeleton frame. The lantern room is above the watch room; the original focal plane of the light was eighty-seven feet from the concrete base and ninety-two feet above sea level. The light could be seen from fifteen miles away. None of the lantern hardware is intact. The system was taken out of service and the Rear Lighthouse abandoned sometime in the 1930s.