Pinopolis was established in 1834 as a retreat village for planters to escape the unforgiving heat and malaria experienced on boggy plantations during the summer. Dr. Morton Waring and Frederick Porcher were the first to build houses in the community, and by 1844 a dozen homes dotted the village. In 1846 a home from nearby Woodboo Plantation was relocated to Pinopolis by members of the Porcher family. At some point – records indicate prior to 1857 – this small structure was built adjacent to the Woodboo House as additional lodging for guests. In 1857 the property was purchased by the Ravenels. One of the more illustrious guests to stay in the Ravenels’ guest lodge was South Carolina poet and novelist William Gilmore Simms. 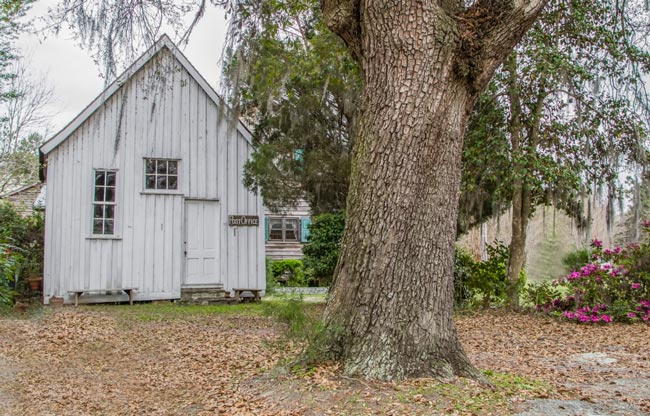 By the end of the nineteenth century, enough people summered in Pinopolis to warrant postal service. The front of the Ravenels’ lodge was converted into a post office, with Elizabeth Ravenel, or Miss Besie, as she was known locally, serving as postmistress. She held this position until her death in 1935. During the building’s early years as a post office, it also was used as a local schoolhouse for the children of those who had made Pinopolis a permanent residence. 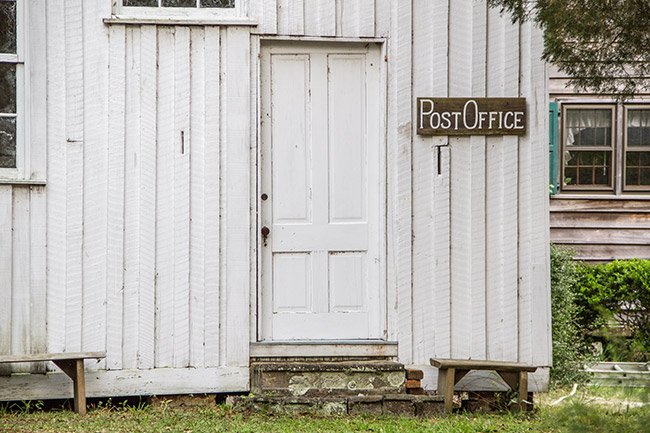 Miss Bessie was said to have run the post office independently of the federal government, often accepting credit from her neighbors. The small space became a gathering spot for the local women, who would spend time in the post office exchanging news and stories. After Miss Bessie died in 1935, the post office continued until a somewhat more modern – though still small and rural – building was constructed adjacent to the historic one in 1974. The original post office was restored in 2007. The restoration project was paid for by the sale of the book, Plantations, Pineland Villages, Pinopolis and Its People by Pinopolis native and retired surgeon Dr. Norman Walsh.