Though the Greek Orthodox Church of the Holy Trinity Church was not built until 1953, the congregation had been worshiping in Charleston since 1908 when the first service was held in St. John’s Episcopal Church on Hanover Street. In 1909 around 50 residents formed a Greek organization, the Parthenon Society, followed by the founding of the Grecian Society the next year, which wished to start a church. Just two years later a church was built for the congregation at the corner of St. Philip and Fishburne streets (a space now occupied by Interstate 26). 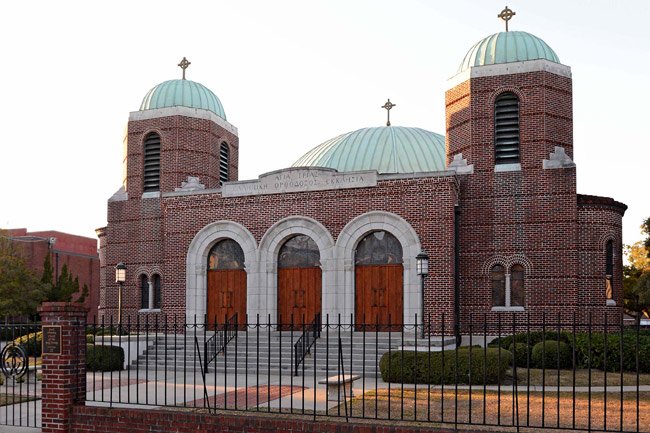 As the twentieth century progressed, the church continued to grow. In 1923 around 50 families comprised the Greek community in Charleston. To answer the increasing needs of the church, the congregation acquired the lot next door to the church for a school and a parsonage. By 1930, the group had purchased the lot where the current church sits to build a community center, and by 1941 the Hellenic Community Center was completed. The Greek community had increased to include 250 families, and a new church was necessary. The church was to be built on the property next to the Hellenic Center. 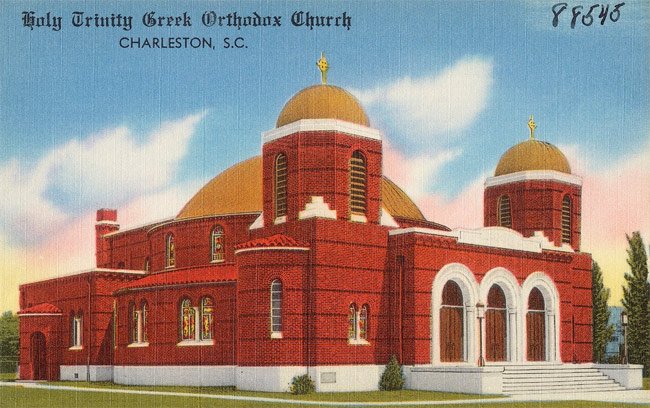 Construction began on the Byzantine edifice in 1950 and was completed in 1953. The name of the church is inscribed in Greek over the entrance. The three-domed structure was inspired by the Hagia Sophia of the Byzantine Empire and is adorned with iconography by Photis Kontoglou of Athens, Greece, including the twelve painted medallions in the nave, a depiction of the Last Supper, and several stained glass windows. Kontoglou is widely regarded for his works in iconography and was considered the foremost authority on the subject before his death in 1965.

Greek Orthodox Church of the Holy Trinity sponsors an annual Greek Festival, held in Charleston over Mother’s Day weekend each year. The festival has recently expanded to include another event in the fall due to its increasing popularity.

Greek Orthodox Church of the Holy Trinity is listed in the National Register:

The Greek Orthodox Church of the Holy Trinity is significant as an excellent mid-twentieth century example of the Byzantine Revival style of ecclesiastical architecture designed by prominent South Carolina architect Harold Tatum, and also for its outstanding examples of Byzantine iconography designed by Photios Kontoglou, the most renowned iconographer of the twentieth century. Tatum, local Charleston architect, completed the design for the church in 1950. He designed many of the interior elements of the church as well, such as the brass light fixtures hanging in the nave, the Iconostasion, the alter, and the Bishop’s Throne.

Holy Trinity is typical of the Byzantine style, which is noted for its use of ornamental domes, large open spaces, and colorful mosaics an/or paintings featuring Christian subjects. This is a two-story structure with a brick veneer and stuccoed brick foundation on a raised basement. The two-story nave is circular in plan and contains a space spanned by a large belcast, standing-seam copper covered dome. The nave is surrounded by a single-story aisle topped with a terra-cotta tile roof. Two octagonal towers with similar domed roofs and cast stone accents flank a flat-roofed narthex. All three domes are surmounted with crosses. Most of the iconography in the church was designed by Kontoglou, a renowned iconographer from Athens, Greece. Kontoglou painted the twelve medallions hanging in the nave and the scene for “The Last Supper” on the Icon Screen, and also designed many of the stained glass windows in the dome.

Plan Your Trip: Greek Orthodox Church of the Holy Trinity