When the United States banished its participation in the international slave trade in 1808, the domestic slave business flourished, and Charleston became a hub for buyers of human flesh. Slaves in the Holy City were sold outside of the Old Exchange Building in a public open-air market. However, in 1856 a city ordinance passed that prohibited the selling of slaves at the busy intersection of Broad and East Bay Streets, citing traffic problems. Beginning that year, slaves auctions were to be conducted away from the street and public view. 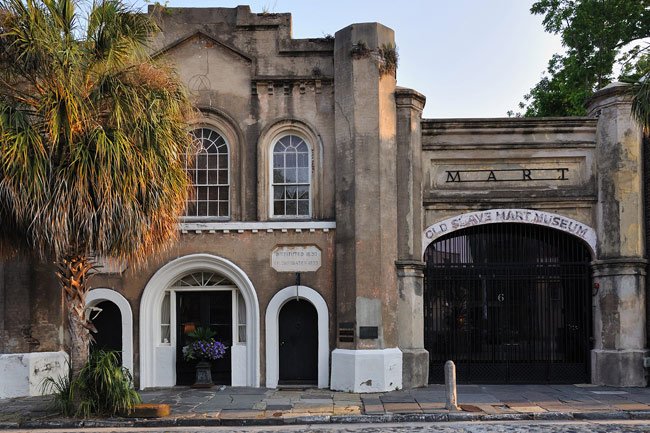 John Diskes of Summerville, 2008 © Do Not Use Without Written Consent

As a result, indoor marts or even yards behind buildings became the places where people shopped for enslaved human labor. Interested buyers came to the city from all over the southeast, and for owners of slave auction houses, the business was lucrative. One of the better-known slave marts was Ryan’s Mart on Chalmers Street, owned by alderman and former sheriff Thomas Ryan. The property extended from State Street to Queen Street and included a converted four-story tenement building that served as a “baracoon” or slave jail, a kitchen, and a “dead house” or morgue. Slaves primarily were sold in the slave yard behind the buildings and away from street view. 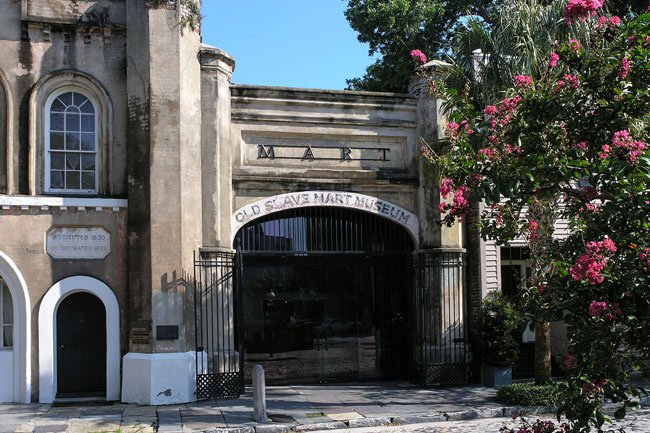 In 1859 Z.B. Oakes purchased the slave mart and added a “shed” with a wide arch and an imposing iron gate flanked by octagonal pillars. The shed contained a roof trussed to the building next door at 8 Chalmers Street, the German Fire Company, as seen in the picture at the top of the page. Once the shed was completed, slaves were sold inside its walls, forced to stand on auction tables for the viewing of prospective buyers. They were usually disrobed so their features could be scrutinized. Buyers looked for a variety of clues to tell them about the slaves, including scars from past whippings that indicated whether a slave was subservient or disobedient.

Slaves continued to be sold here until November 1863, and all slave auction houses closed after Emancipation. The property changed hands a few times following the Civil War and eventually became a tenement house for African Americans, with a second floor added to the shed in 1878. It also served later as an auto repair shop. In 1938 the property was purchased by Miriam B. Wilson, who converted it into a museum of African American art, history, and culture. In 1964 Judith Wragg Chase and Louise Wragg Graves acquired the property and maintained the museum until its closing in 1987. The City of Charleston then acquired the property in 1988 and reopened it as a slave museum in 2007.

The Old Slave Mart is the only existing slave auction building in South Carolina. The museum is a popular destination for visitors and locals alike, accurately depicting the tragic story of slavery in Charleston.

The Old Slave Mart Museum is listed in the National Register:

(Ryan’s Mart) The Old Slave Mart was originally a commercial building used for slave trading and other transactions from 1853 until the Civil War. The stuccoed building with its rounded arch entrance is a visual reminder of commercial activities of antebellum South Carolina. The building is probably the only extant building used as a slave auction gallery in antebellum South Carolina. The building, built in 1853, has elements of Gothic and Romanesque Revival architecture with its massive octagonal pillars and arched entrance. Built for former Charleston sheriff and alderman Thomas Ryan, the Mart was also used by other principal brokers (auctioneers) of the time.

Alterations include extension of the rear of the building about 22 feet in 1922. In 1937 a wooden façade was inserted within the arch, a second floor added below the original roof, and the tile roof replaced with a tin roof. Following the Civil War, the building was used as a tenement house and about 1922 was converted into an automobile salesroom. Old Slave Mart Museum was established in 1937. The Mart originally included two additional lots and three additional buildings, a jail or “Barracoon” to house slaves prior to sale, a kitchen, and a morgue. The back two lots were cut off in 1875 and the jail, kitchen, and morgue were demolished in the 20th century.

Cathedral of St. John the Baptist