This former depot shipped cotton along the Atlantic Coast Line Railroad. The prized fiber made Cheraw a prosperous town in the early nineteenth century, and once railroads allowed a second means of shipping – steamboats along the Great Pee Dee River were the first – the city flourished. 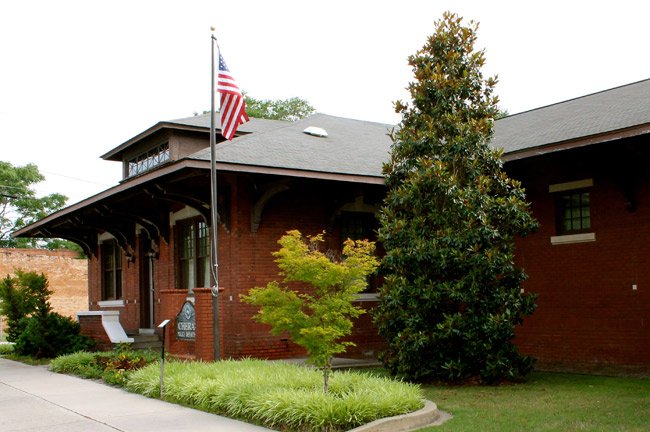 Though much of Cheraw was financially devastated after the Civil War, the town began to recover in the early twentieth century – mainly due to the high value of cotton. In fact, there were so many platforms of cotton waiting to be shipped out by train that this depot was built in 1916 to accommodate the local comeback commerce. The city enjoyed its renewed economic security until the boll weevil attacked the cotton crops in 1928, killing the industry practically overnight. The banks of Cheraw were already failing one year before the stock market crash of 1929. After the death of the cotton in Cheraw, there was no more need for freight lines such as this one.

In the 1980s the depot became home to the town police department, and the building was expanded and remodeled ten years later.

Here is some additional information about Cheraw’s police station, provided by Cheraw’s Director of Tourism and Community Development, David Sides: “There’s a good reason why the Cheraw Police Department resembles a train station. While the tracks are long gone, this structure was originally built in 1916 as a freight station by the Atlantic Coastline Railroad to accommodate Cheraw’s bustling cotton market. Extensive cotton platforms were once located behind the station, and a short side track positioned along Duvall Street connected with the main railroad track. Across the street were rows of cotton warehouses. For many years, a cotton market operated in the center of downtown’s Market Street. The freight station was renovated as the town’s police headquarters in the 1980s with a second renovation and expansion ten years later.”