This grand home in Darlington‘s historic district was built around 1900 for merchant Abraham Hyman. The builder was African-American master carpenter and self-taught architect Lawrence Reese, who moved to Darlington from Marlboro County in 1887. Reese was responsible for the design and construction of many of the stately homes that line West Broad Street. 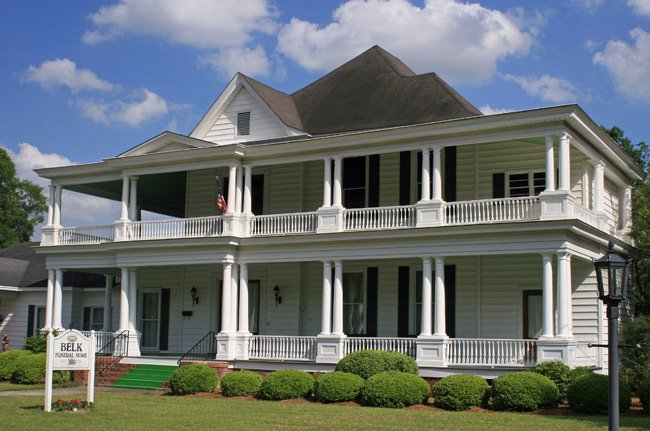 In 1961 the house, then vacant, was purchased by Marion C. Belk. He and his partners, Frankie Oliver Belk and Harold L. King, restored the house and converted it into a funeral home. Today the funeral home, also known as the Abraham Hyman House, continues to be owned and operated by the Belk family. 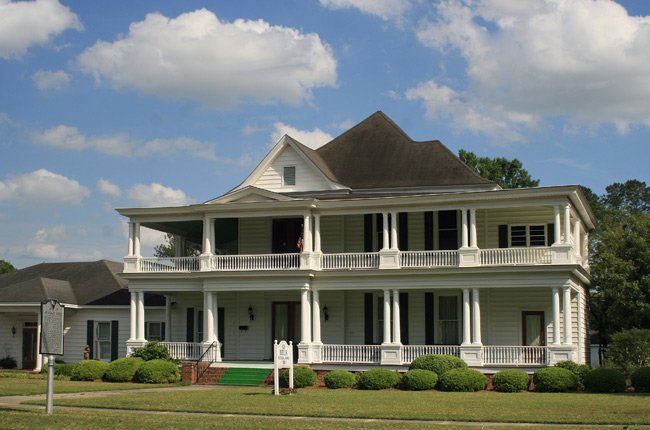 The Belk Funeral Home is listed in the National Register as as the Abraham Hyman House in the West Broad Street Historic District:

The West Broad Street Historic District is a significant collection of intact residences which were constructed between ca. 1890 and ca. 1928. Most of the residences are grand in scale and reflect the prosperity of the individuals who built them. Several of the houses were owned by some of Darlington’s most prominent citizens. The district, which includes a basically intact section of a residential neighborhood, contains 34 houses and four noncontributing properties within its boundaries. Most of the residences are large, two-story frame Victorian or Queen Anne structures with decorative woodwork. The dwellings are set on deep lots that are planted with large trees and shrubs. A number of these large residences are similar in appearance and were built by master carpenter Lawrence Reese. Also included in the district are thirteen modest, one-story frame houses with a few decorative features, as well as two imposing brick bungalows.