This Colonial Revival home in historic Hartsville was built in 1927 for one of the city’s more illustrious figures of the twentieth century, Paul Hamilton Rogers. Rogers moved to Hartsville upon graduating from the University of North Carolina in 1905 to work for his uncle, businessman James Lide Coker. Coker founded Carolina Fiber, a local paper company, and Rogers eventually became president of the business following the 1931 death of his cousin, James Lide Coker, Jr. 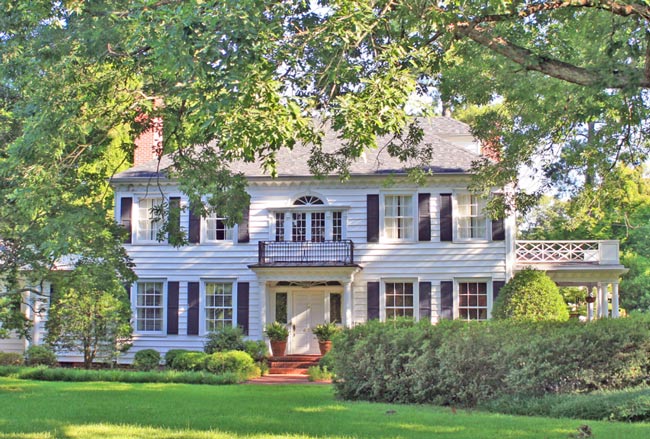 Under Rogers’ guidance, Carolina Fiber survived the Great Depression and later sought to expand the company’s offerings by producing corrugated cardboard for shipping material. In 1941 Carolina Fiber merged with Sonoco, which remains South Carolina’s largest corporation in product sales. Today the company specializes in packaging materials. Rogers went on to be named president of Carolina Paper in Columbia and Fort Sumter Paper in Charleston. He also served as mayor of Hartsville from 1921 until 1929.

The Paul H. Rogers House is listed in the National Register:

The Paul H. Rogers House is significant as an excellent example of Colonial Revival residential architecture and for its association with Paul. H. Rogers (1883-1960), prominent Hartsville industrialist and businessman who served as president of Carolina Fiber Company and as mayor of Hartsville. The house was built in 1927 for Rogers and was designed by architect Franklin Gordon of Charlotte, North Carolina. This two-story frame residence has a rectangular plan, with a five-bay façade, a hip roof, and a one-story stoop with iron balustraded balcony, supported by two Tuscan columns, at the central entrance. The central entry features a single-leaf six panel door with fanlight and sidelights. The second story features a four-part Palladian window above the balcony which further contributes to the Colonial Revival character of the residence. One-story porches with Chippendale balustraded balconies are at the left and right elevations; the porch on the left elevation has been enclosed to create a sunroom, while the porch on the right elevation is supported by two pairs of Tuscan columns. The main block of the house, porches and front stoop feature a full entablature with stylized Gothic motif and guttae.