This simple meeting house in rural Dillon takes its name from the nearby Little Pee Dee River – in fact, some records refer to the church as Little Pee Dee Presbyterian Church. It was founded around 1829 by the Reverend Duncan McIntire (also spelled McIntyre), who delivered his sermons in Gaelic for the many Scottish settlers who understood only that language. The tradition of Gaelic services continued until the Civil War. Prior to the founding of this congregation, Presbyterians in this area usually traveled to Ashpole Presbyterian in Rowland, North Carolina, just over the South Carolina border. The Reverend McIntire was the minister at Ashpole Presbyterian when he realized the need for a church along the Little Pee Dee River. 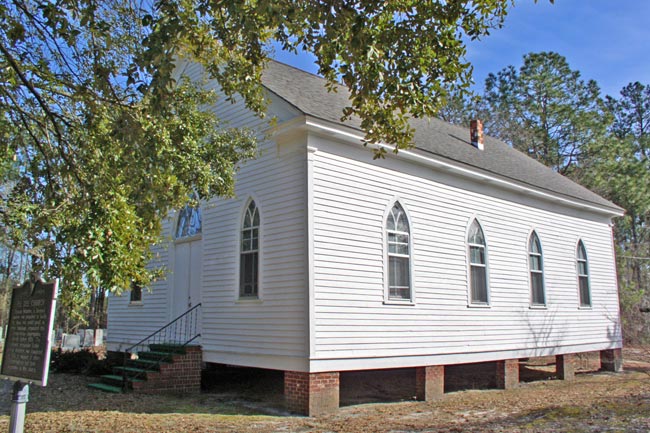 The church was established on the river near Campbell’s Bridge, and a log structure was built to accommodate its members. In 1851 the congregation relocated to the present site on land donated by Neil M. Carmichael and Mary McDuffie. The Carmichael family cemetery rests near the church and is often mistaken as the original church graveyard. This frame structure was built some time between 1851 and 1855, and individual families constructed the pews. The church was restored in the early part of the twentieth century; the original double-door entrance was replaced by a single door, and the double doors were converted into windows. An addition was built in the rear of the church during this process, which housed a new pulpit. 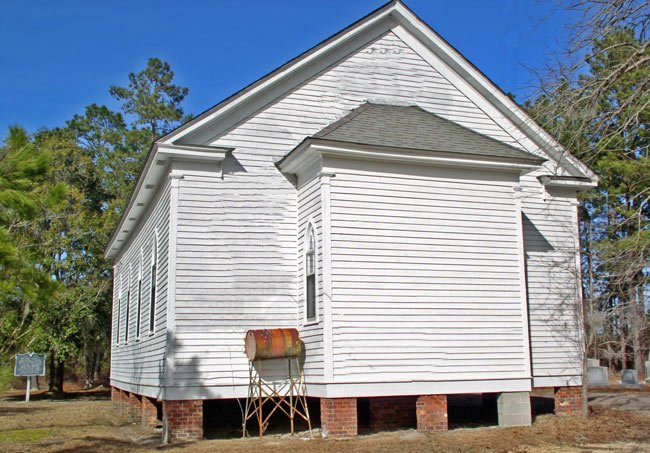 The church was dissolved in 2003 due to low membership, though the building is held in trust and maintained by a board of trustees. It opens on occasion for special services such as the traditional Kirkin’ of the Tartans ceremony, or blessing of the families.

Former church member Gerald M. Berry shares: “I am a direct descendant of the founding families of this church, the McIntyres and the Carmichaels. My direct family members have always been associated with this church and active in its congregation. In 1946, I was baptized in this church by Reverend Pat Boyle and became a member in my youth and remained a member until 1972. For most of those years, I attended afternoon services there and remember it very well. During those years, there were, to the best of my knowledge, basically four families who were still actively involved in the services at Pee Dee Church: the Stuarts, the Campbells, the Rays, and my family, the Berrys. I miss that church and still have clear, fond memories of those quiet afternoon services and the faithful people who were there. Although regular services ended in 2003, I now long for annual religious services to be revived and to be reminiscent of those from my childhood and youth – not merely the celebration of ancestral roots but, more importantly, the celebration of religious beliefs and the worship of God.”