Located in downtown Summerville, this modern memorial to the United States Armed Forces stands on a site steeped in history. The memorial was designed by World War II veteran Frances Suddeth Josephson, and it was dedicated on November 11, 1995 by World Ward I veteran Lonnie Shealy. Though the building that sits behind the memorial now houses Dorchester County Human Services, it served as the Dorchester County Hospital from its construction in 1937 until the 1980s. 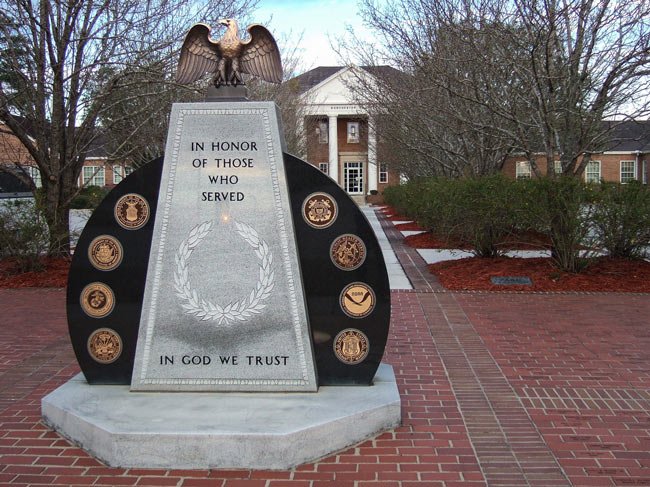 John Diskes of Summerville, 2007 © Do Not Use Without Written Consent

Long before the hospital’s first brick was laid, a biracial woman named Catherine Springs donated this land for use as a mission that would serve underprivileged white children as well as children from local Indian tribes. Established in 1883 under the auspices of St. Paul’s Episcopal Church, the mission was called St. Barnabas and offered education, religious instruction, and importantly, healthcare. These latter efforts eventually led to the creation of Dorchester County Hospital, which ironically served only whites. (Authur B. Lee Hospital, across the street, served blacks and other people of color. Because of this, Mrs. Springs herself could not have been treated in the hospital built on the land she once owned. Lee Hospital is no longer extant and its former site is presently occupied by a bank.)

Cummins Theological Seminary moved into the then-abandoned Lee Hospital in 1942. Four years later, in 1946, the ecclesiastical college purchased the mission’s former chapel and had it carried to their campus, renaming it Pengelley Memorial Chapel after Bishop Author Pengelley, the second Bishop of the Reformed Episcopal Church.

In 1981 the seminary moved the building again, this time to its current campus at 705 South Main Street. The chapel is now known as St. Paul’s Reformed Episcopal Church (not to be confused with the aforementioned St. Paul’s Episcopal Church) and holds services each Sunday.