The rural Lebanon area of Winnsboro is the backdrop for this historic farmhouse. The property, which sits near the Old Lebanon Church ruins, is known throughout the community as the Jane Turner Place. Three alternate names for the home are the Turner Yongue House (1), the Sarah Belle Turner Place (2), and the Widow Jane Turner House (3).

First owned by J.B. Turner, the home was constructed in the 1840s (3) as a summer residence (1). Following the Civil War, Turner left the house and surrounding property to his grandson, James “Yongue” Turner. The home became associated with Yongue’s wife, Jane, because she operated a school just across the road.

James Younge Turner, Jr. and Sarah Bell Lemmon were married here, and they lived in the house in the late 1800s and early 1900s (1). James Turner was sick (illness now unknown) and died at an early age (1). The last Turner occupant was one of James and Sarah’s daughters, Janie Turner. Like her grandmother before her, she was a school teacher. She never married as her fiancee was killed in a car crash (1). She passed away in 1997 with no children. 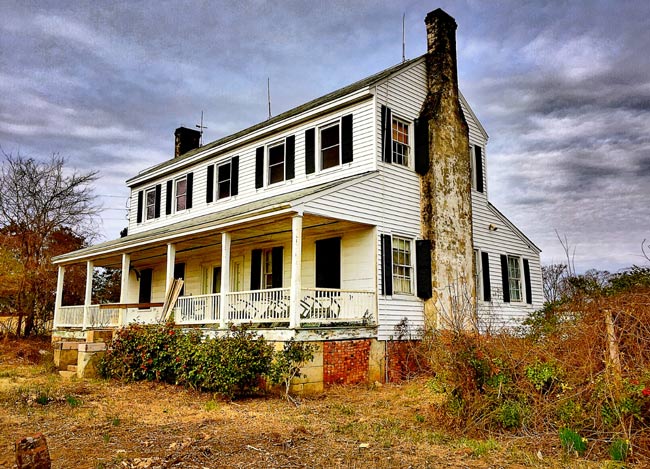 Having no issue, Janie left the home to her nephew, William Ariail. It is now owned by William’s grandson, William Hutchinson of Charleston, who also was married here. He purchased it from his mother in the late 2010s (1).

The following description comes from a book published in 1953 by Julian Stevenson Bolick called, A Fairfield County Sketchbook.

This large, comfortable, old frame house in its neat surroundings has long been a landmark in the Lebanon Community. It is located at crossroads, sitting well back from and facing the Winnsboro-Newberry Highway, which is crossed by the road to the old Jackson Creek Church in one direction and Adger in the other.

It is a typical upcountry plantation house, two stories high, covered with a gable roof, and fronted with a long, wide, one story piazza. To the rear is a wing and the kitchen. Neat outbuildings are in the background surrounded by the acres upon acres of rolling green pastures.

The approach to the house is attractive. It is well back from the road and is framed with beautiful trees and shrubs and several well-trimmed, thick hedges which set off the yards and gardens. An attractive gate is at the entrance to the yard.

The history of this place is rather obscure but within the memories of old neighbors it has always been known as a TURNER PLACE, members of the family having owned and occupied it. J. B. Turner is the first known owner. He gave the place to his grandson some time after the War Between the States. The wife of the grandson (Yongue Turner) was named Jane. She was a widow for many years and during that time the plantation was referred to as the JANE TURNER PLACE. The school which was across the road and also on Turner lands was called the JANE TURNER SCHOOLHOUSE.

In later years and even to the present time it is often called the SARAH BELLE TURNER PLACE for the late Mrs. Sarah Belle Lemmon Turner who lived here for so long. The friendly old house is now owned and occupied by her children and is still one of the best kept and neatest places in the community.