There was no official Catholic church in Georgetown until after the Civil War. Just prior to the war, beginning about 1856, a group of Catholics met in the home of Arthur Morgan to worship under traveling priests. Once the war ended, the group became a station of Stella Maris on Sullivan’s Island. 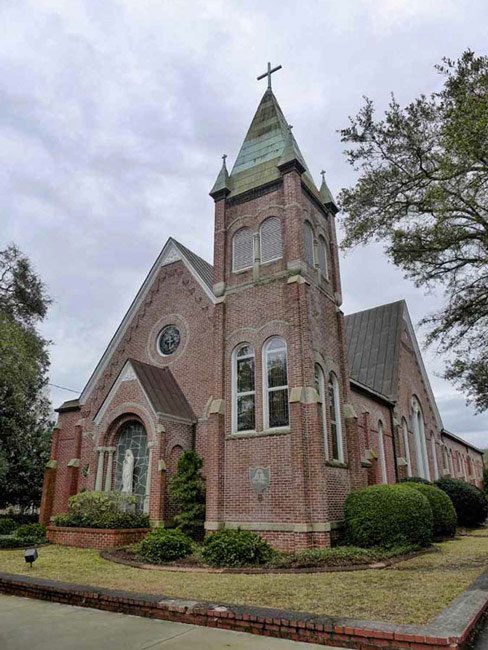 When Arthur Morgan died in 1878, his nephew, William Morgan, began hosting the group and made his home a quarters for the visiting priests. However, the Catholics of Georgetown strongly desired sacraments. In 1898 Father Charles DuBois Wood was assigned to the budding church. Each week he rode his horse, Dan, from his church in Florence to Georgetown. Father Wood sought approval from Bishop H.P. Northrop to build a church for his Georgetown flock. With the bishop’s blessing, a lot was purchased and ground was broken in October of 1899; Father Wood said a Sunday Mass a few weeks later. The cornerstone of the present church was laid on Thanksgiving Day of that year.

While the name St. Mary was given to the church in honor of the mother of Christ, the name is also said to honor the mother of William Morgan. Bishop Northrop mentioned “His Blessed Mother, Our Lady of Ransom” during the dedication of the church on January 5, 1902, effectively naming the church St. Mary, Our Lady of Ransom. Two of the German stained glass windows were dedicated to William Morgan’s parents, John and Mary Morgan.

The original cruciform shape of the church was modified when the building was enlarged in 1967. In 2002 the new Parish Life Center was dedicated.

St. Marys Catholic Church is listed in the National Register as part of the Georgetown Historic District: