The historic Winyah Indigo School in Georgetown dates to the mid-eighteenth century, when it was established by the Winyah Indigo Society, a social organization for wealthy planters who wished to discuss the prosperous indigo industry as well as news from England, Scotland, and the American colonies. Although the Winyah Indigo Society did not receive its official charter from King George III until 1757, it had established a school of the same name by 1753. The Winyah Indigo School served as a predecessor to our nation’s public schools. A contemporary account, published in the South Carolina Gazette on February 6, 1755, describes it as a “free-school in George-Town, for teaching and instructing indigent children, in the use of letter, and the principles of religion.” 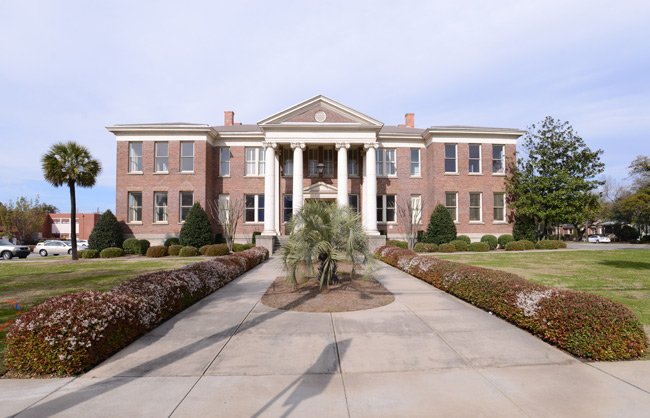 Most pupils, however, came from wealthy families who paid tuition. Only twelve slots were reserved for poor students. These children were given paper, a pen and ink, two sets of outdoor clothing, and even firewood. Despite this, the South Carolina Gazette reported in January of 1760 that only 10 of the 12 slots had been filled.

In 1907 land was purchased for the construction of a separate school building, and by 1908 the two-story building opened. It was built by the architectural firm headed by Hartsville native Charles Coker Wilson, who designed many notable buildings throughout South Carolina, including the State House. The school initially served students through the tenth grade, adding the eleventh grade in 1912. The area’s population grew, and the upper grades were moved to the former Georgetown Hospital in 1919. In 1924 an addition to the school was built to accommodate the growing student body; the original building and the addition are connected by an auditorium, which was enlarged during the building project.

A new high school was built next to the Winyah School, as it came to be known, in 1938. The original Winyah school building remained in use by the school, however, until 1985; Coastal Carolina University in Conway also utilized the 1924 addition for a number of years. In 1985, Georgetown High School was organized and located elsewhere, and the building was given to Georgetown County. Coastal Carolina University continued to use part of the building while the county and preservation groups worked to find other uses for the historic school.

Today the building, including the original school, the auditorium, and the 1924 addition, houses several entities: the Georgetown School of the Arts and Sciences, a private college preparatory school; the Lowcountry Conservatory of Music; Coastal Optical; and Coastal Eye Group.

The Winyah Indigo School is listed in the National Register:

(Winyah Graded & High School; Old Winyah School; Georgetown Graded & High School) The Winyah Indigo School is comprised of a 1908 graded school and auditorium, and a ca. 1924 auditorium extension and high school addition to the rear. It was constructed in the Classical Revival style. Significant as a design of the prominent Columbia, SC firm of Wilson, Sompayrac and Urquhart, the 1908 school was built by John Jefferson Cain, contractor, also of Columbia. David B. Hyer, an architect from Charleston, designed the 1924 high school building, which was built by the Cheves-Oliver Construction Company, also of Charleston. An important landmark in Georgetown, this school was built on what had historically been a commons area for the townspeople. It is one of the few, surviving, relatively intact early twentieth century brick school buildings in Georgetown County. The entire masonry building rests on a raised masonry and concrete foundation. The foundation is separated from the exterior brick walls by a concrete stringcourse. The low hip roof of the building is covered with asbestos shingles. A full basement is located beneath the grade school. The auditorium links the graded school and the high school.