Originally called St. James Mission Church, Christ Church in Greenville is this Upstate city’s oldest congregation. The church was organized by the Reverend Rodolphus Dickerson in 1820, around the same time that Vardry McBee – considered the “Father of Greenville” – began establishing mills, a store, and other businesses on the land he purchased in 1815 surrounding the Reedy River. The result of McBee’s efforts eventually became downtown Greenville.

Trey Pennington of Greenville, 2009 © Do Not Use Without Written Consent

McBee donated land for the construction of a building to house the St. James Mission Church on September 2, 1825, and on September 15th the cornerstone of the first church building was laid. The following year the church joined the Episcopal Diocese of South Carolina and became Christ Church Parish. As the city of Greenville grew, so did the congregation. By the mid-nineteenth century the church membership had outgrown the original building, and construction began on a larger church in 1852. 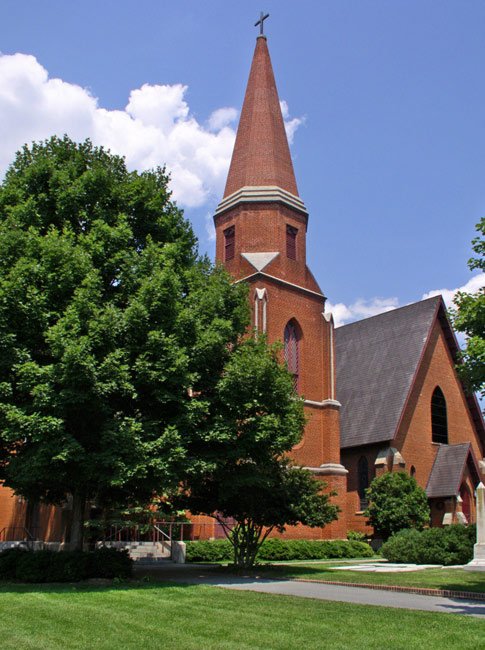 The present Gothic-style building was completed in 1854, designed from plans created by Joel Poinsett and modified by the Reverend John D. McCollough. Poinsett, a vestryman of Christ Church, served the nation as Ambassador to Mexico and is known for introducing the poinsettia (Euphorbia pulcherrima) – which is named for him – to the United States. Poinsett also served South Carolina in many roles, including as a state legislator and the president of the State Board of Public Works. It was in this capacity that Poinsett helped develop a state road from Charleston to northern Greenville County. A stone bridge built along this route, the Poinsett Bridge, also bears his name. 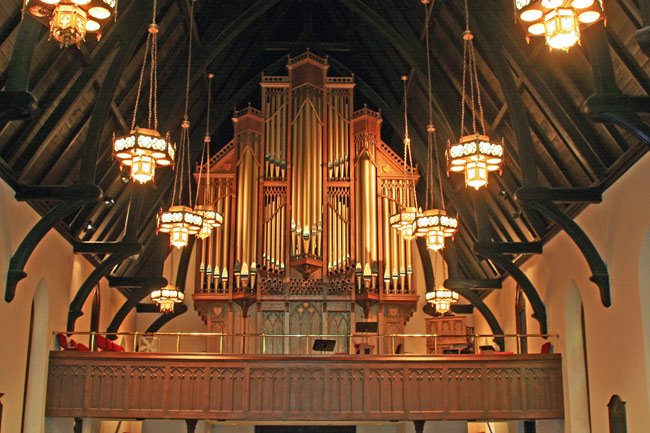 Christ Church was built in a cruciform – or cross shape – and all additions to the building have adhered to the building’s original cruciform design. Poinsett died in Stateburg in 1851 while traveling across South Carolina and never saw his church design come to fruition. He is interred in the churchyard at the Church of the Holy Cross in Stateburg. Interestingly, the Church of the Holy Cross is another Episcopal Gothic-style edifice built in a cruciform.

Many notable South Carolinians are interred in the churchyard at Christ Church, including Governor Benjamin Franklin Perry and Vardry McBee. McBee donated land not only for Chirst Church, but for many churches around Greenville, including nearby McBee United Methodist Church. 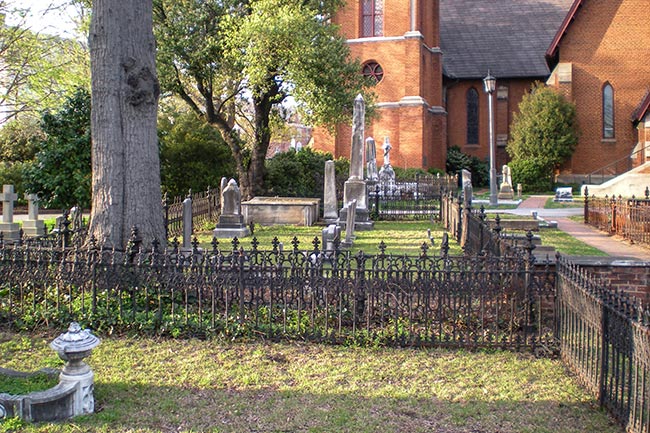 Trey Pennington of Greenville, 2009 © Do Not Use Without Written Consent

The extraordinary stained glass window pictured below was created by Franz Mayer & Company of Germany. The window was sent to the church just prior to World War I in memory of Ellison Capers, a Confederate brigadier general that served as rector of the church from 1866-68 and bishop of the Diocese of South Carolina from 1893 to 1908. 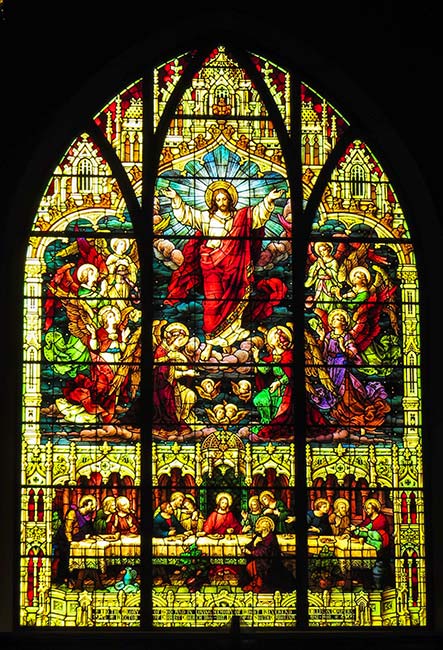 Candy Jones of Greenville, 2019 © Do Not Use Without Written Consent

One of the other notable windows within Christ Church is the one pictured below designed and signed by Tiffany. Tiffany Studios in New York was operated by Louis Comfort Tiffany, with several other designers, from 1878 to 1933. Tiffany glass continues to be one of the most well known and sought after types of stained glass today.

Candy Jones of Greenville, 2019 © Do Not Use Without Written Consent

Christ Church is listed in the National Register:

Historically, Christ Church is Greenville’s oldest organized religious body (1820) as well as the city’s oldest church building (1852-1854). It has traditionally been recognized as an outstanding example of Gothic architecture. Each addition has been in keeping with its style and original plan for a cruciform building. A magnificent stained glass window by Mayer of Germany is a memorial to Ellison Capers, rector of Christ Church (1866-88), bishop of the Diocese of South Carolina (1893-1908), and Confederate brigadier general. In the churchyard surrounding the building are buried former governor of South Carolina Benjamin Franklin Perry, several Greenville mayors, many Confederate war dead, and the first Greenville man lost in World War I. Also interred here are the parents and son of the first Bishop of the Diocese of Upper South Carolina, Vardry McBee, the “Father of Greenville,” and many other church and civic leaders. The Reverend John DeWitt McCullough is the credited architect.