Once standing in the heart of Gaston, Culley’s Grocery was a vital part of its community. Johnny and Annie Bell Culley purchased the building and opened the business in 1937. Initially Mrs. Culley was in charge of the day-to-day operations, while Mr. Culley worked as a brickmason in Columbia. There was a home attached to the rear of the store where the couple resided with their family. After a few short years, business had increased and Mr. Culley left his job as a mason to work in the store full-time. 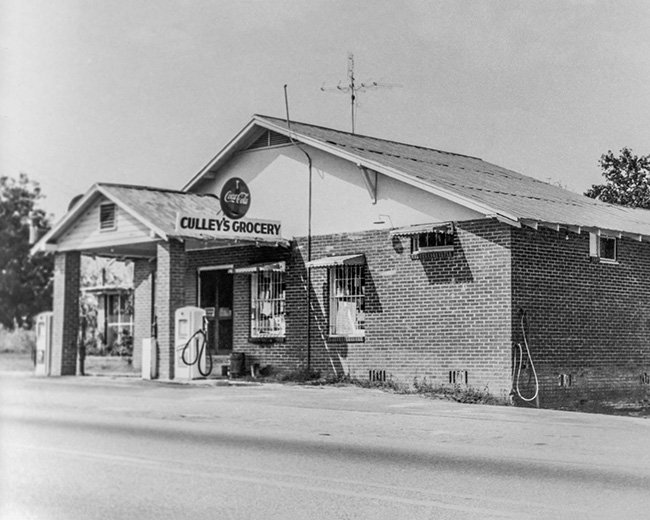 Contributed by Kent Rowell of Gaston, 1950 © Do Not Use Without Written Consent

At first, the store operated from 6 AM to 10 PM every day with the exception of Sunday; the hours would vary slightly over the years. The building measured 20′ x 25′ and its only source of heat, like many other stores and homes of the time, was a wood-burning pot-bellied stove in the center.

As the store grew, so did its size and offerings. The physical building doubled in size, modern heating and air conditioning were installed, and meat-cutting equipment and walk-in coolers were added. Mr. Culley, a self-taught butcher, used an old tree trunk for a butcher block and cut meat fresh to order using meats supplied from wholesalers in Columbia, where he would travel once a week to purchase new stock.

While in Columbia, fresh produce was acquired through vendors at the State Farmers Market. Mrs. Culley, who was in charge of dry goods, and made frequent trips to Columbia herself to meet with wholesalers for store inventory. One of her oft-visited haunts was Bluestein’s, a celebrated dry-goods establishment which closed its doors only recently. Some of the Culley’s children and grandchildren also worked in the store, making it a true family affair.

Culley’s at one time was the only place in town to have a telephone, which locals were often allowed and encouraged to use. In addition to groceries and clothes, the store offered a plethora of supplies from fan belts to needles and thread. A glass display case under the front counter was filled with affordable candies, at perfect height for the children excitedly eyeing them. Gasoline was available at pumps outside. The pumps had a hand crank which cleared out the previous sale before a new one was started.

Kent Rowell, who supplied the photograph and information for this page, is one of the Culley’s grandsons. He went on to say that “cases of oil were stacked on the floor, which made an excellent place to sit, enjoy a cold soft drink, snack, or ice cream, and talk about whatever was of interest at the time. It was the place where local school kids caught the bus to attend grades 7-12 in nearby Swansea and were dropped off in the afternoon when school was out.”

In 1971 the Culley’s retired and closed the doors to the once bustling store. The couple lived out their lives in the home attached at the rear. In the late 1990s, the property was sold by the family to a developer. The store and home were demolished and a modern gas station and car wash now stand in its place, a mere shadow of what once was the heartbeat of a community.

Culley’s Grocery was located about 300 yards north of the Gaston Fire Tower seen in this 1949 photograph below. The road seen running left to right is United States Highway 321. This particular stretch was later named South Main Street. 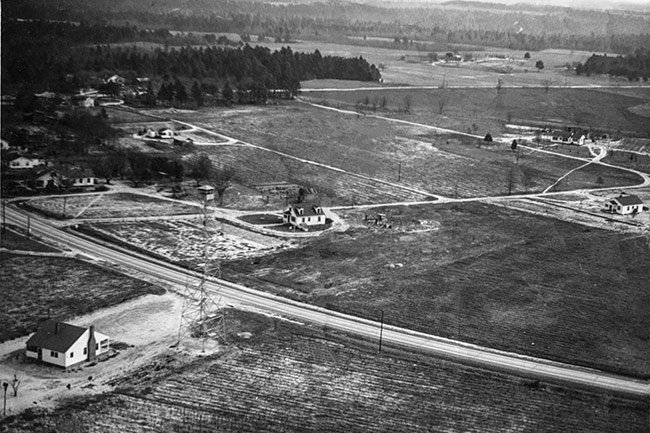 Contributed by Kent Rowell of Gaston, 1949 © Do Not Use Without Written Consent