This Victorian-era home was built in the Queen Anne style around 1895 for Leesville dentist Dr. Ezekial Etheredge. Leesville consolidated with Batesburg in 1993, forming a new municipality, Batseburg-Leesville, and today this striking home stands in the heart of town. The defining features that make the home a classic Queen Anne design include asymmetrical projections, an octagonal turret, and a variety of shingles. The present colors of the facade are also representative of the Queen Anne style. 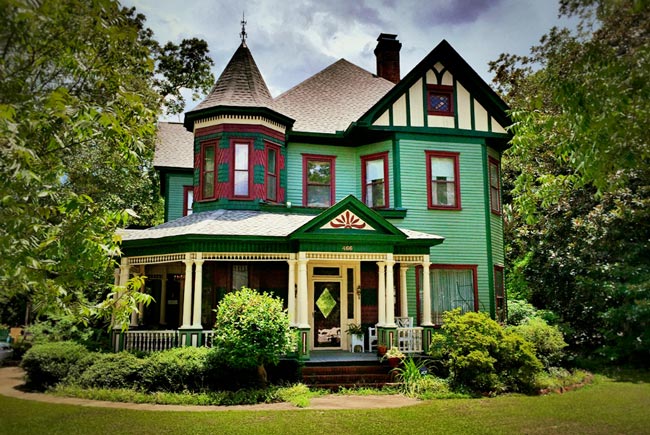 Dr. Etheredge was a prominent member of his community, respected not only for his dental practice but also for his real estate business, his position as a banker, and his seat in the South Carolina legislature.

The Ezekial Etherege house is listed in the National Register as part of the Church Street Historic District (note that the address of the home is now 466 East Columbia Avenue; some of the street names changed following the consolidation of the two towns):

The Church Street Historic District is significant as a neighborhood that developed in accordance with the birth and initial economic development of the town of Leesville during the late nineteenth and early twentieth centuries. The oldest residence in the district, the James C. Bodie House, is a survivor of the era prior to the railroad and the incorporation of the town. The Bodie-Crawford House and the Ezekial Etheredge House are indicative of the emerging prosperity of the community, and of the adaptation of that part of Church Street to medium density residential. The six contributing buildings in the district, five houses and one Gothic Revival church, were constructed between 1865 and ca. 1909. The district retains integrity from this period, with only one building having been built after 1910. Residential architectural styles include the Italianate, Victorian and Queen Anne.