The South Carolina Tobacco Museum is located in downtown Mullins in Marion County. The museum, which moved into the depot building in 1998, depicts life on a South Carolina tobacco farm prior to 1950. Exhibits show the complete growing cycle and production of tobacco from the field to auction. 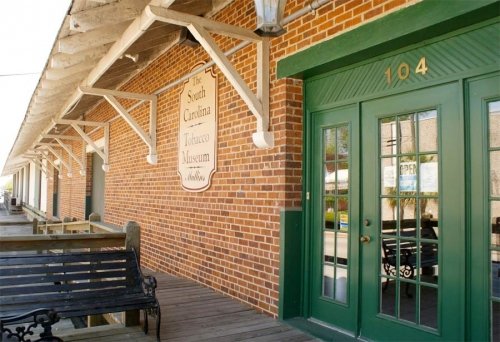 George Smith of Mullins © Do Not Use Without Written Consent

Also on display in the museum are tobacco farming equipment, a reconstructed pole barn, a 15-minute informative movie, and other special exhibits. The museum is housed in the restored Mullins Depot, built in 1901 and remodeled in 1931. The town of Mullins formed around a railroad stop along the Wilmington and Manchester Railroad. William Sidney Mullins, who served as president of the railroad in 1857 and 1858, was instrumental in the laying of tracks in Marion County in 1854. The town is named for him. 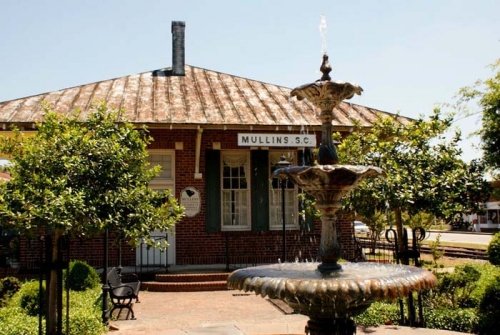 George Smith of Mullins © Do Not Use Without Written Consent

The tobacco boom in Mullins began after resident Dr. C.T. Ford planted an experimental plot of tobacco in his yard in 1894. Soon others followed suit, and in 1895 William “Buck” Daniel shipped a crop to Virginia and received a good profit in return. By 1896 tobacco was the the reigning crop for Mullins farmers, and the town quickly became the largest tobacco market in the state. Warehouses such as the Old Brick Warehouse stored tobacco and hosted auctions from July through October, and the town even boasted four tobacco redrying plants. The train depot, which carried both passengers and freight, was an essential part of the crop’s success.

Though this historic depot now serves as a museum and the home of the Mullins Chamber of Commerce, the Carolina Southern Railroad and CSX Railroad still supply rail service in the town.

The Mullins Depot is listed in the National Register as part of the Mullins Commercial Historic District:

The Mullins Commercial Historic District is significant as an intact collection of late 19th and early 20th century commercial and other public buildings illustrating the growth and development of Mullins from its beginnings as a railroad town to its prominence as the leading tobacco market in South Carolina for most of the 20th century. This two-and-on-half block area includes forty-four buildings constructed between 1895 and ca. 1945, during the boom period of the tobacco culture in the Pee Dee. Thirty-eight properties contribute to the character of the historic district, while eight are non-contributing. The district’s buildings reflect the one- and two-part commercial blocks found in towns throughout the nation and represent stylistic influences ranging from late Victorian period examples displaying elaborate brick-corbeled cornices and pediments to the more simplified and minimalist Depression-era examples with typical low relief detailing and vertical piers.