The historic Lower Long Cane Associate Reformed Presbyterian Church (also known as Long Cane Church), constructed in 1856, is located in McCormick County, just four miles outside the small town of Troy. The history of this church originates with a congregation of Scots-Irish settlers who arrived in New York from Billibay, Ireland in 1764. They were led by Dr. Thomas Clark, a graduate of Glasgow University and former pupil of Pastor Ebenezer Erskine, for whom Erskine College is named. 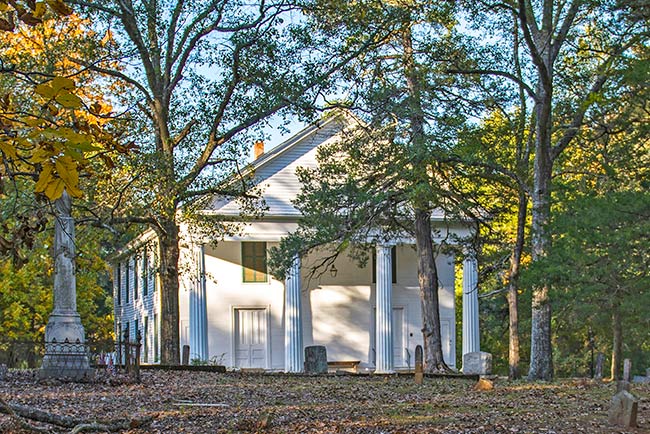 When the group arrived in New York, some members split off and headed south, eventually arriving in what was then Abbeville County. The rest stayed and settled in upstate New York. Dr. Clark visited his Southern flock in 1771 and formally organized them as the congregation of Long Cane that same year. 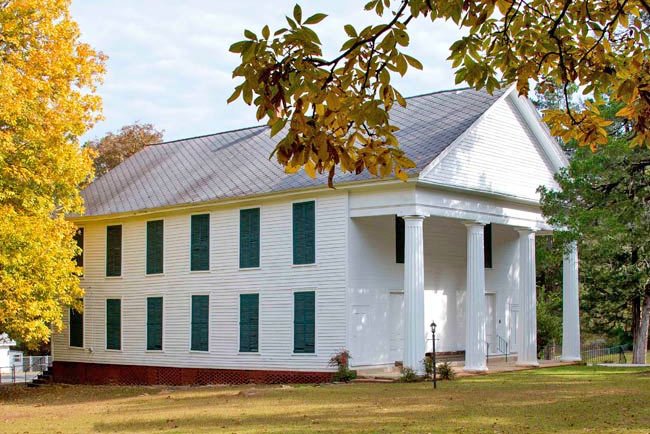 Dr. Clark returned to his congregation in New York, but eventually came back to Lower Long Cane in 1786 and stayed until his death in 1791. He also served as pastor of Lower Long Cane Church’s sister congregation, Cedar Springs A.R.P. Church. Dr. Clark ministered to his followers both as pastor and physician, and he is remembered as a beloved and respected leader. 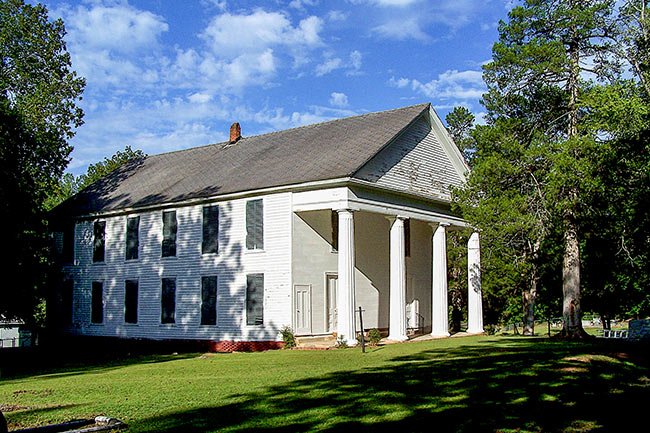 Services in the church’s early days were held under two large oak trees where a large wooden board served as a shelf for the Bible. This tradition came from the days of religious persecution in Scotland when a man could be arrested and his belongings seized if he was caught praying in his home. 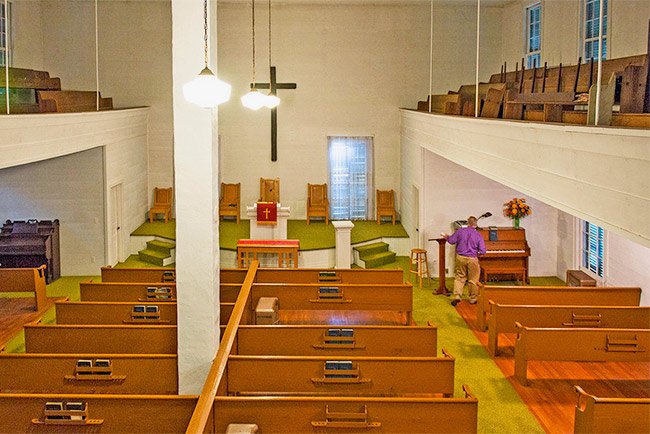 Lower Long Cane Presbyterian was lucky to have two ministers who each served at least 40 years – Dr. H.T. Sloan, who served from 1850 to 1890, and Reverend R.F. Bradley, who took over for Sloan in 1891. Reverend Sloan was responsible for starting other A.R.P. churches in the area after the Civil War, including Troy A.R.P. Church. Continued westward migration ultimately diminished the congregation’s size, but it has been said that the congregation’s descendants ended up in all of the Southern and Western states. 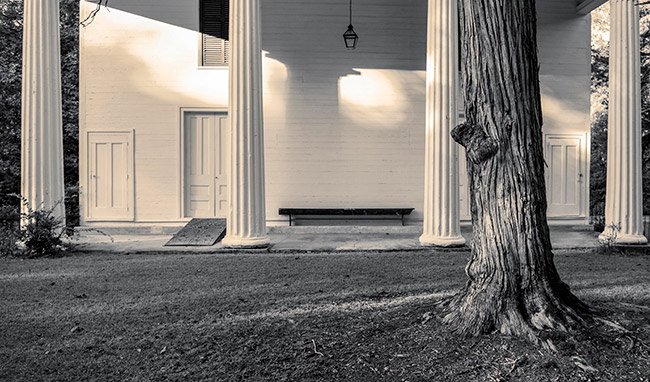 Its sanctuary, designed by William Henry Jones of Atlanta and dedicated in 1856, is an outstanding example of the Greek Revival style as applied to the simple meeting house form, while its cemetery of more than 500 graves includes burials of several charter members of Long Cane Associate Reformed Presbyterian Church from the period 1790-1856, when this church was exceptionally significant in the formation, growth, and development of the Associate Reformed Presbyterian Church as a whole.

The church rests on a foundation of handmade brick piers, with a pierced brick curtain wall added at a later date. The façade features a fully engaged tetrastyle Roman Doric portico with an unadorned entablature and a steeply pitched pediment. Originally covered in wooden shingles, the roof was by ca. 1950 covered with diamond-shaped asbestos shingles. A small brick flue pierces the roof ridge at the center of the building. The interior auditorium is two stories in height with flushboard walls and ceiling. The gallery features a continuously paneled knee wall, ranked wooden floors, and simple handmade pews. 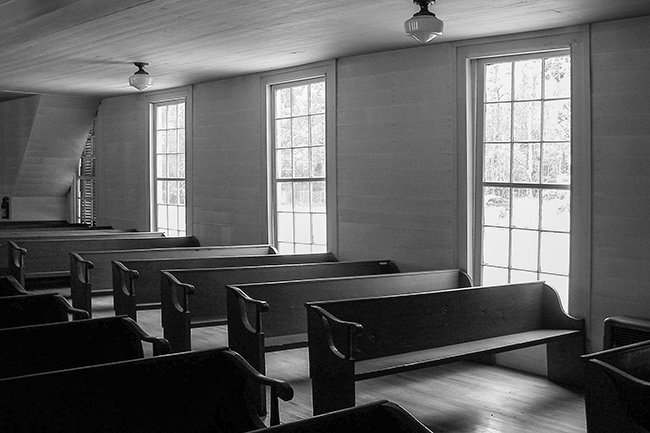 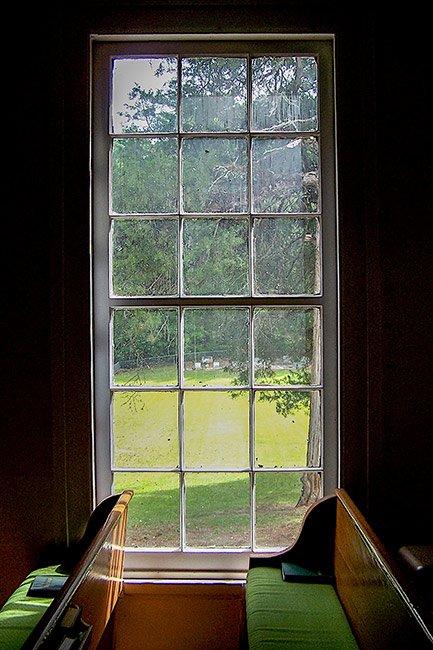 While the Lower Long Cane Associate Reformed Presbyterian Church is not in immediate danger, its few remaining members may be unable to continue to care for it as they have in the past. The crumbling column shown below represents one of the many challenges facing historic rural churches in South Carolina. 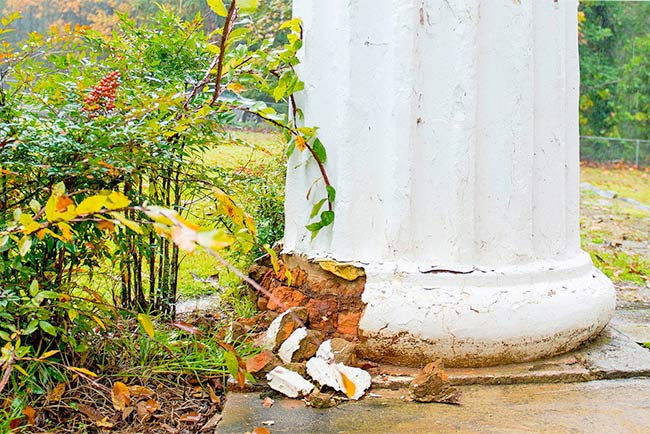 Lower Long Cane once boasted nearly 300 members. Today, its congregation consists of just eight people, six of whom are shown here. Pictured in purple is the Reverend Michael Horne, pastor. Pictured in a tan jacket is Jeff Grier, the church’s youngest member. 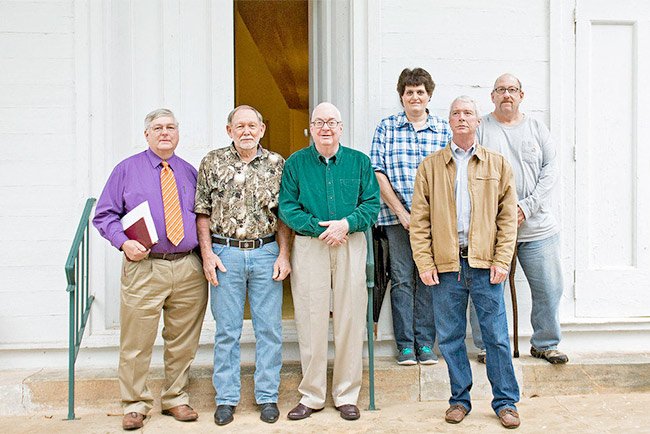 Bill Fitzpatrick, who serves as a member of the South Carolina Picture Project board, has partnered with Preservation South Carolina to help save endangered churches such as Lower Long Cane. Their beautiful book, South Carolina’s Sacred Spaces, highlights Lower Long Cane and its plight going forward. This generously-sized volume, which features 254 pages of extraordinary images and Bill’s personal accounts of the churches and their histories, is a wonderful way for us, as ordinary citizens, to help save some of our state’s most cherished landmarks. 100% of the proceeds go to a building fund to help maintain and protect these churches. Please treat yourself to a copy today!