The history of this church in the unincorporated community of Providence – just outside Holly Hill – dates to 1806 when itinerant preachers traveled circuits spreading Methodism in the United States. A log structure to house the new congregation was built around that time on intersecting Vance Road – then the main highway – about a half-mile away. A churchyard located behind the site of the first church is no longer in use but still maintained by the congregation. 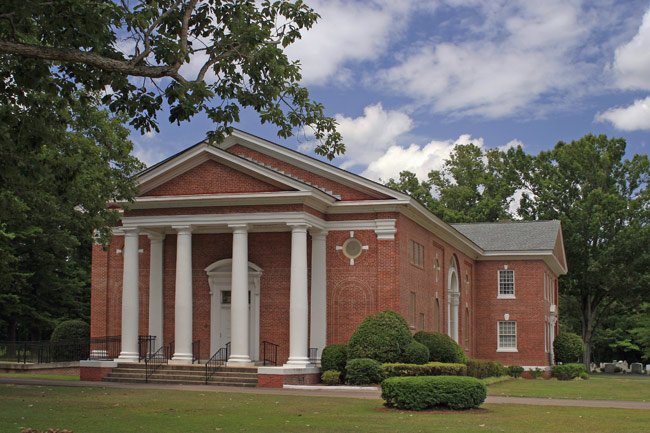 Around 1810 four acres of land for a new church were donated by Timothy Shuler at the present site. A frame sanctuary was built on the land shortly after the church acquired it; the second church had double entrance doors and a separate entrance in the rear of the church for slaves. 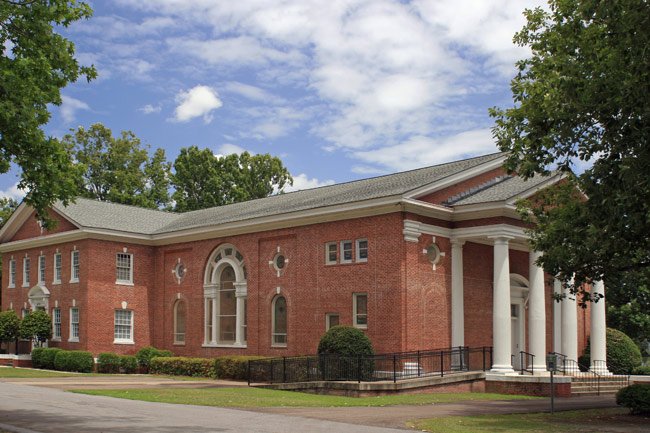 The second church was remodeled twice, in 1855 and 1890. In 1916 Providence Methodist Church became part of the South Carolina Conference and received its first station minister, the Reverend P.K. Rhoad. Two years later the church wished to build a large, modern brick church, though transporting brick to the site proved difficult. A logger in nearby Four Holes Swamp, Vernon Crosby Badham, was hired to deliver the materials, which he did by building a railroad spur to the community. The cornerstone of the church was laid in 1919, and by 1920 the present church edifice was complete. 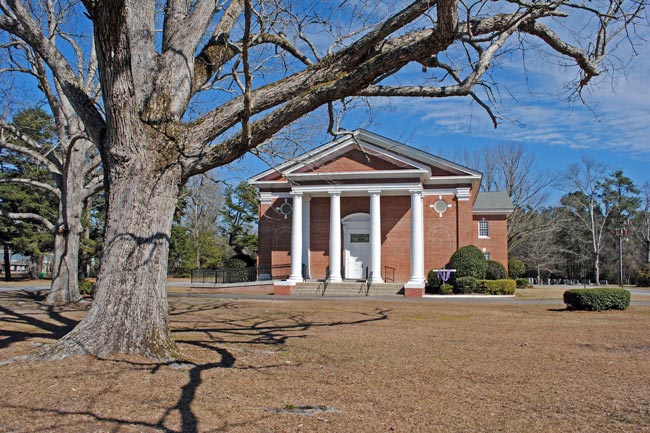 A large portion of the funds used to build the new church were raised by the parishioners. The men of the congregation formed a “Pig Club,” in which members each raised a pig, sold it, and donated the proceeds to the building committee. The women of the church belonged to a similar group known as the “Egg Club,” which sold eggs and donated profits to the church. While these clubs only raised a fraction of the money needed for the church, many members donated privately to the building fund, raising $39,000 of the $41,000 needed. 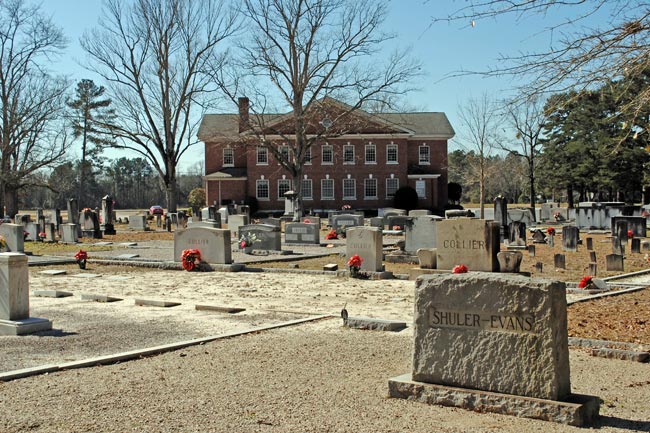 The Neoclassical structure was designed by renowned architect Charles Coker Wilson, who is known for such works as Neville Hall on the campus of Presbyterian College and the South Carolina State House. The stained glass in the church’s imposing Palladian windows (seen below) is said to have come from the studio of Louis Comfort Tiffany, though no church records can be found to confirm the origins of the glass. 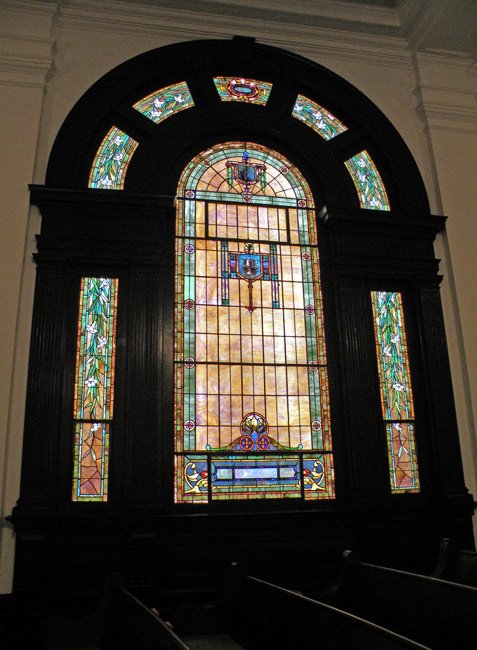 The land adjacent to the church is home to two baseball fields, which the church owns, along with an old building that belonged to an Orangeburg County school (seen below). The original baseball field belonged to Orangeburg County School District 3, which allowed the community to use it for Little League baseball. However, the Providence Purple Hurricanes, which included both boy and girl athletes, found themselves without a ball field in 1980 when changes in the school district barred the team from using its facility. In 2005 the church was able to purchase the ball field along with the remaining school buildings, once again bringing Little League baseball to Providence. Land for an additional field was donated by the family of Ken Shuler in 2011. Having a second field enables the team to host tournaments. 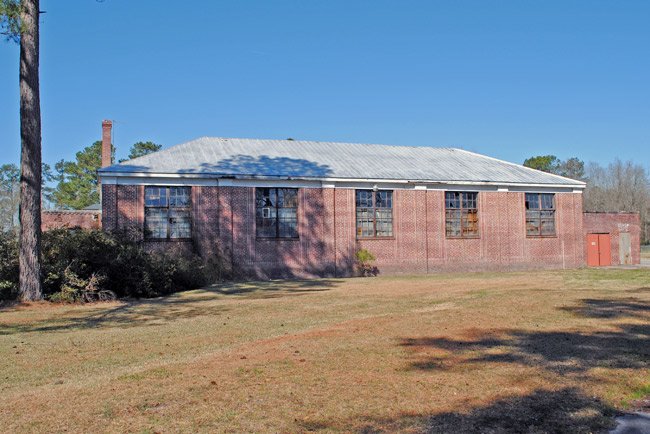 The marker seen below honors church member Bart Hutto, who died in 2010. Hutto owned land next to the church which was the site of Providence Farmers Supply Company, a company that opened during World War II. Hutto bequeathed $50,000 to the church, which it used to buy his adjacent property. The church then razed the vacant building and installed a historical marker to commemorate Hutto’s generosity towards the church. 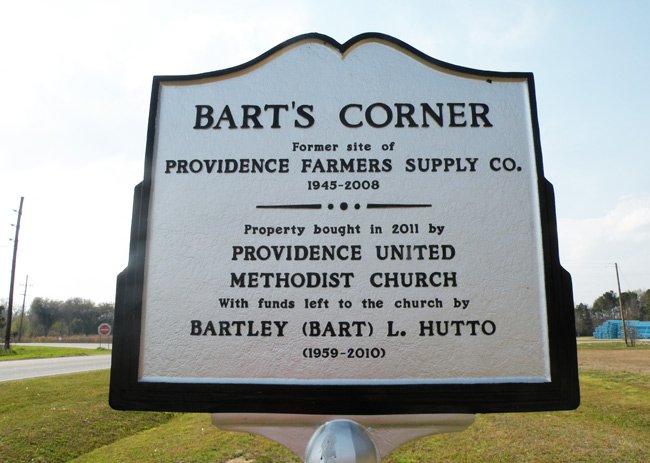 Providence United Methodist Church is listed in the National Register:

Providence Methodist Church, constructed in 1919-20, is significant architecturally as an outstanding and remarkable example of an early twentieth-century Neo-Classical sanctuary in rural lower South Carolina. The church was designed by the renowned Columbia, South Carolina architect Charles Coker Wilson, one of the most successful and influential South Carolina architects of the early twentieth century. The church building, inclusive of the sanctuary and rear educational/administrative wings, is laid out in a slightly modified cruciform plan and features a gable-front, temple-form, edifice with a central tetrastyle portico, simplified Roman Doric order limestone columns, pilasters and entablature, a boxed cornice with pedimented gables, numerous bull’s eye windows, and remarkable large stained glass Palladian windows. In particular, its outstanding sanctuary windows, which church members insist were purchased from Louis Comfort Tiffany’s studio at the time of construction, make the church a noteworthy property combining Wilson’s fine church architecture with outstanding examples of early twentieth-century art glass. To the rear of the church is a large cemetery that contributes to the significance of the property. It contains the burial plots of more than 400 parishioners and community members dating to 1856, though fewer than fifteen individuals were buried there prior to 1880.