This two-room schoolhouse outside of Columbia was built in 1923 as Pine Grove Rosenwald School. Between 1917 and 1932, over 5,000 schools were constructed in the rural South to educate African-American children. They were called Rosenwald Schools in honor of Julius Rosenwald, then-president of Sears and Roebuck, who provided funds to assist in their construction. 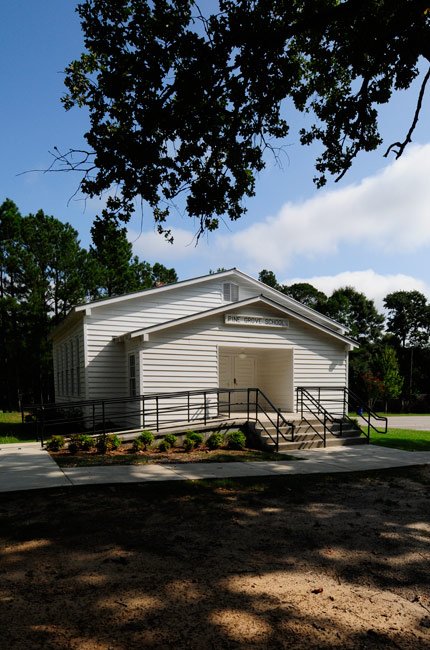 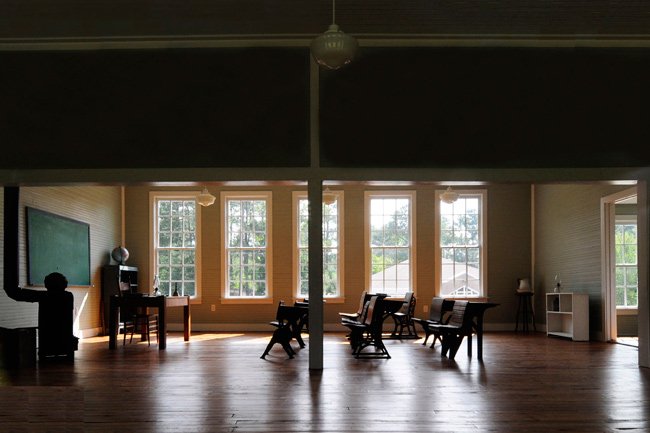 In 2006 efforts by the National Trust supported with a donation from Lowe’s Home Improvement Store got underway to restore the school to its original 1923 design. In fact, 33 Rosenwald Schools that had fallen into disrepair were converted into museums or community centers by the National Trust with financial gifts from Lowe’s. During the Pine Grove restoration, the kitchen was dismantled, the roof replaced, and the interior paneling was replaced with weatherboard. A new community center was added to the 4-acre lot by the Richland County Recreation Commission, which owns the school building and surrounding property, now named Pine Grove Park.

Pine Grove Rosenwald School is listed in the National Register:

The Pine Grove School is significant as a representation of the modernization of African American education in a period marked by massive discriminatory school funding. The school is also an important reminder of the educational improvements brought about by the philanthropic efforts of the Julius Rosenwald Fund which constructed over 5000 schools in fifteen Southern states from 1917 to 1932. Built in 1923, the Pine Grove School is a wood-frame, one-story rectangular gable-front building with a V-crimp tin metal roof. The layout of the Pine Grove Rosenwald School is a variant of the two-room schoolhouse published as Rosenwald Community School Plan No. 2-C.

The Community School Plans were utilized by the Rosenwald Fund between 1920 and 1928 and offered state of the art schoolhouse designs. The common characteristics of these designs included the orientation of the building, light colored paint schemes, and large banks of tall narrow windows. These particular elements were aimed at providing proper ventilation and optimal natural lighting inside the school, features that many early-twentieth century African American schoolhouses lacked. An initiative for the construction of the Pine Grove Rosenwald School raised $2,500 for the schools construction. The local African American community donated $265, the white community raised $315, and public funds totaling $1,200 were gained for the construction and operation of the new school. In return the Rosenwald Fund provided a $700 grant and architectural assistance towards the construction of the school.