This abandoned Greek Revival home still stands watch over the Glendale Mill, its brick ruins seen looming in the distance. The cotton mill was established in 1831 by Dr. James Bivings, who called the village he developed around his manufacturing company Bivingsville. The Bivingsville Mill prospered along Lawson’s Fork Creek, and this stately home was built for Bivings and his family in 1836, positioned on a bluff overlooking his factory. 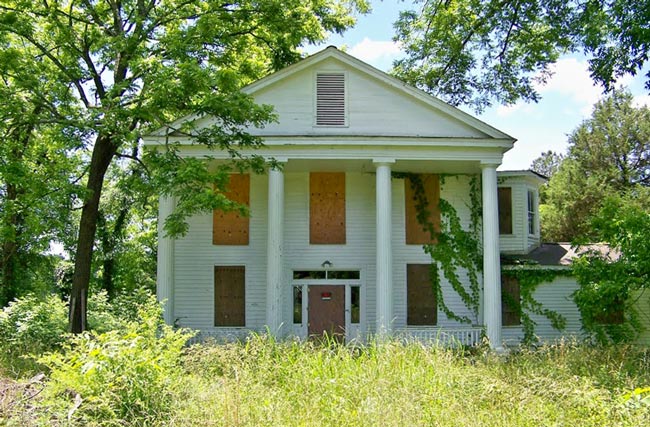 Though the mill was initially prosperous, in the late 1840s it took a financial downturn. Bivings sold his share of the mill in 1854 and moved to his new manse, now called the Evins-Bivings House, in nearby Spartanburg. The mill was bought in 1856 by Dexter Converse, who changed the name of the village to Glendale. The name of the mill followed suit. 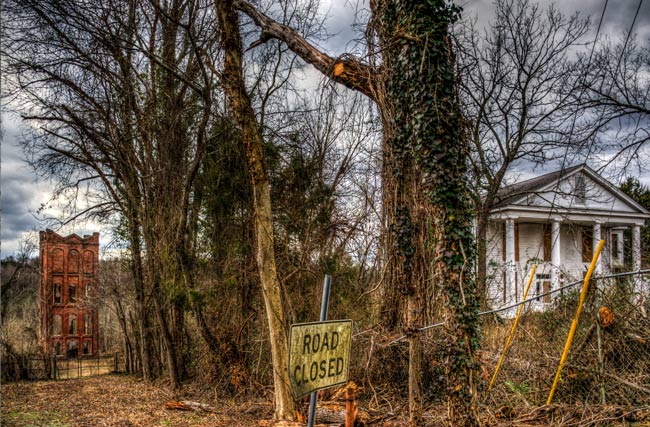 F. Everett Leigh of Union, 2015 © Do Not Use Without Written Consent

Converse, who founded Spartanburg’s Converse College in 1890, purchased Dr. Bivings’ former home in 1859 and lived here while overseeing the operations of the Glendale Mill. Converse also eventually moved to Spartanburg, in the late nineteenth century, though he continued his interest in the mill and even established other mills in the area. After Converse departed Glendale, various mill superintendents occupied the home throughout the early and mid-twentieth century. Converse died in 1899.

The textile industry declined after World War II, and Glendale Mill finally closed in 1961. This once-impressive mansion was vacated and has been neglected ever since.

The Bivings-Converse House is listed in the National Register:

The Bivings-Converse House, built ca. 1836, is significant as an excellent vernacular example of mid-nineteenth century Roman Revival (or Greek Revival) residential architecture with late-nineteenth century alterations and for its association with Dr. James Bivings (1781-1869), prominent local textile pioneer, and Dexter Edgar Converse (1829-1899), industrialist, textile entrepreneur, and founder of Converse College. Bivings established the Bivingsville Cotton Factory in 1831, one of the earliest cotton mills in South Carolina. Though the factory prospered for over twenty years, it eventually went into bankruptcy and was sold in 1856. Converse, a native New Englander, was mill superintendent when it failed. He became a partner in the factory’s new ownership and bought Dr. Biving’s house sometime after 1859. It is a two-and-one-half-story frame mansion with a gabled roof and distinguished and imposing front and rear porches with impressive fluted Roman Doric columns. The house was altered ca. 1890 by the addition of two Victorian bays and a kitchen wing, alterations with significance in their own right.