This Queen Anne home in historic Union was built around 1903 for Joseph H. Gault, president of Gault Manufacturing, an early twentieth century textile mill. The two-and-a-half story asymmetrical house is noted for its conical turret on the northwest corner. The wrap-around porch is rounded to complement the turret. The stately home is indicative of an architectural style poplar with wealthy homeowners at the turn of the twentieth century. The Gault House has most recently served as a by-appointment antique and reproductions business. 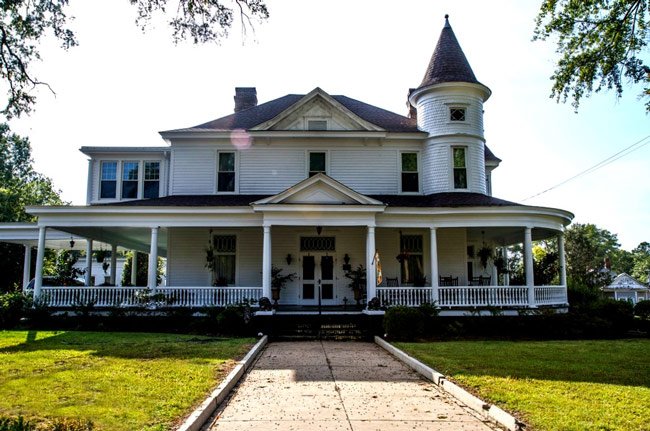 The Gault House is listed in the National Register as part of the South Street-South Church Street Historic District:

The South Street-South Church Street Historic District is a significant collection of 88 properties along South Street, South Church Street and South Pinckney Street. This district is primarily residential in character and includes properties dating from ca. 1850 to ca. 1930, with the majority dating from ca. 1850 to ca. 1915. The district developed as an important residential neighborhood near the commercial center of Union. The district includes the finest collection of period residences of the late nineteenth and early twentieth centuries identified in Union, and represents well the characteristics of an upper income residential sector in a small town of the era. Many of the community’s most distinguished architectural specimens are located in the district. The character of the district is defined by many large-frame Queen Anne inspired houses built ca. 1880-1910, in addition to Neo-Classical, Gothic Revival, Colonial Revival, Tudor Revival, Four-Square, and Bungalow style buildings. The district includes the first Carnegie Library established in South Carolina.