This Neoclassical home in Fort Mill was built in 1906 for John Barron Mills, Sr. The house was built during an economic boom in Fort Mill thanks to the success of the local textile industry. Mills was the manager of the Fort Mill Manufacturing Company store and later established his own business, a dry goods and clothing store called Mills and Young. He was a prosperous merchant and well-respected business leader, and his home is considered the finest of its style in Fort Mill. Following Mills’ death, the home came under the ownership of the Mack family, relatives of the Mills. 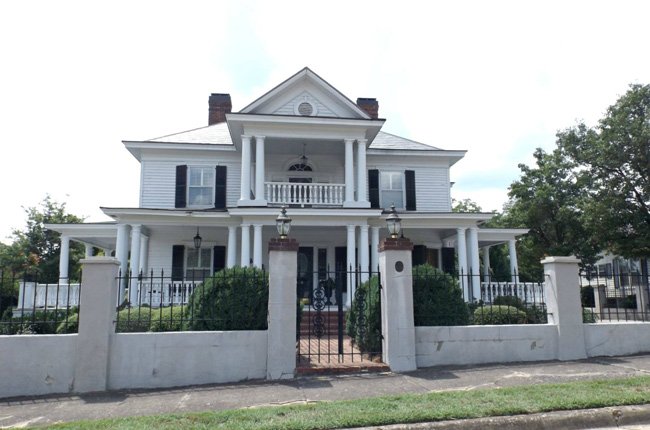 The Mills-Mack House is listed in the National Register:

(Mack House) Constructed in 1906 as part of the expansion of Fort Mill’s residential areas during a period of prosperity and growth resulting from the development of the textile industry, the Mills House is an example of the Classical Revival style. It is perhaps the best example of this style in Fort Mill. The façade is dominated by a central lower porch topped by an upper tier and flanked by side porches connected by decking. All porches have Doric columns and balustrade with turned balusters. The slate roof of the house is hipped, has a north-facing gable, and is capped by a balustraded deck. The first owner was John Barron Mills, Sr., a Fort Mill businessman. He was the first manager of the “Company Store” of the Fort Mill Manufacturing Company. He later became an independent businessman, operating Mills & Young, a dry goods and clothing store. Mills served as a leader of the business community in Fort Mill. After Mills’ death, the house passed into the related Mack family. It is often referred to as the Mack House.