This peaceful scene shows a dock on Langley Pond, which is located in Burnettown in Aiken County. At 285 acres, Langley Pond seems large enough to be a lake, but the name given to it when the dam was built in 1854 has stuck. 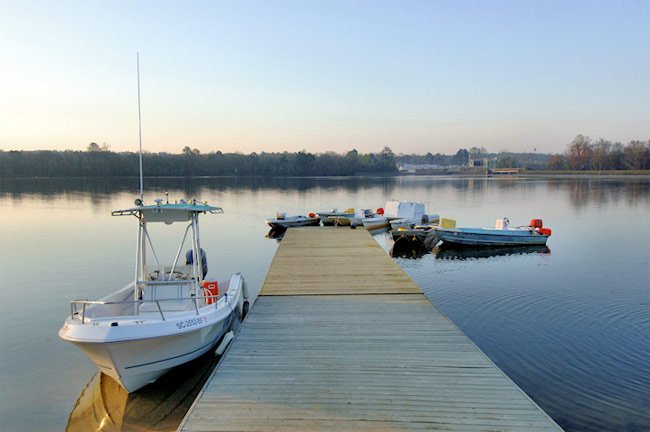 Larry Gleason of Aiken, 2006 © Do Not Use Without Written Consent

The pond serves as the center of a vast water recreation park with facilities for swimming, boating, fishing, skiing, regattas, picnicking, and community events. Prior to the 1996 Summer Olympics in Atlanta, Langley Pond became the home practice facility of the US Rowing Team. After five years, the Olympic team moved to California, but Langley Pond remains a popular training and regatta venue for rowing teams from all over the country. 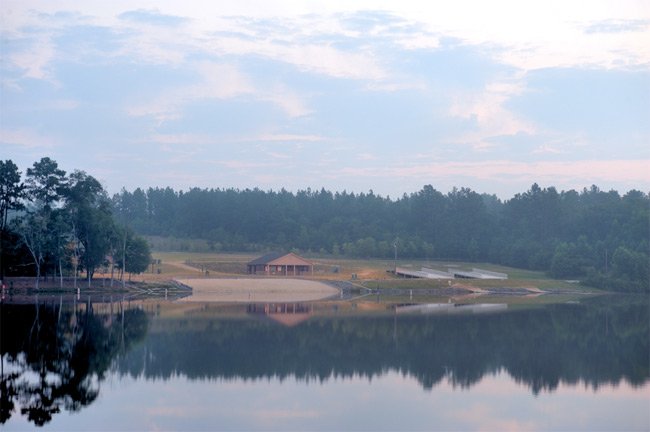 The exposed wooden pilings of an old railroad trestle, seen below, were discovered in 2015 when Langley Pond was lowered for repairs on the dam. The trestle is a remnant of the Southern Railway line that once passed through the area. It was built sometime after 1894 (when Southern Railway was established) and before 1928 (when the trestle appeared on a United States Geological Survey map). The rail line ran toward Augusta, Georgia.

James Salters of Graniteville, 2016 © Do Not Use Without Written Consent

Contributor James Salters shares: “This is the old railroad trestle that once crossed Langley Pond. Normally it’s underwater, but with the pond being down, the trestle is now exposed. It’s not known exactly when it was built, but there’s a map from 1928 that shows it being there and in use, although it may be older than that.”