This “town clock” is located at the renowned Palmetto Golf Club in Aiken. The club was founded in 1892 by Thomas Hitchcock, of the famous Hitchcock Woods. There were only four holes at the club in the beginning, but now it is a par 71 course with 18 holes. 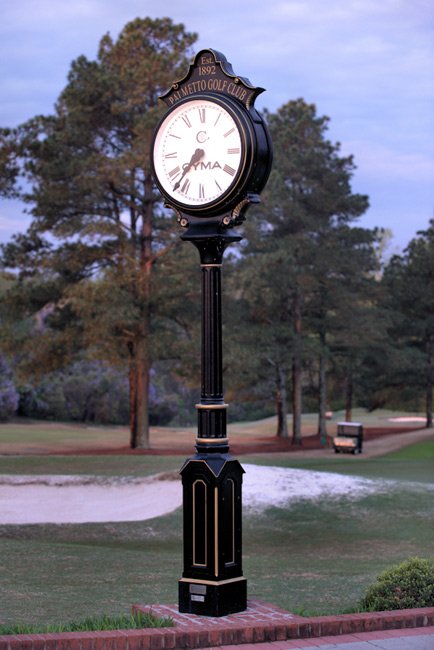 It is believed that the Palmetto Golf Club is the oldest continually-operating 18-hole golf course in the Southeast that is still in its original location. Palmetto Golf Club could also be the second oldest golf club in the United States as well.

Many professional golfers and famous people have played at the Palmetto Gold Club over the years, such as Ben Hogan, Byron Nelson, Ben Crenshaw, Fred Astaire, Bing Crosby, and Presidents Eisenhower and Taft – just to name a few!

Larry Gleason, a longtime SC Picture Project contributor who shared the photo above, sends this interesting note: “It seems that SCIWAY collects town clocks. I was assisting a professional photographer with a golf tournament last Friday at the Palmetto Golf Club that is not a public course but has some historical status in South Carolina. I was surprised to find that they have their own clock that is of the same design as most of the clocks now found in many towns.”