Pine Lawn Cemetery in Aiken was officially called the Aiken Colored Cemetery from its establishment in 1852 until 1988, when it was changed to Pine Lawn Memorial Gardens, a variation of its present name. The city purchased four acres of land from James Purvis in 1852 to be used as a public burial site for local African-Americans. Prior to the end of the Civil War, many of the people buried here were slaves or veterans. However, many freedmen were interred here before Emancipation, and several community leaders from the Reconstruction era through the present rest beneath the cemetery’s storied cedar and pine trees. 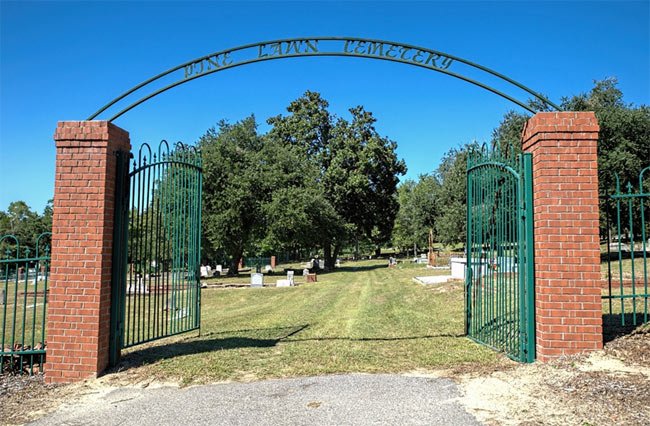 Until the mid-twentieth century, the Aiken Colored Cemetery was the only public cemetery available to local African-Americans. In 1892 the city deeded the cemetery to the Aiken Cemetery and Burial Association, though the city continued to provide support in maintaining the cemetery. The land came under the ownership of Pine Lawn Memorial Gardens, Inc., in 1988, which now manages the cemetery. The Board of Trustees is comprised of both younger and older members of Aiken’s African-American community who share the goal of preserving the cemetery’s historical integrity and maintaining its significance as a cultural landmark. 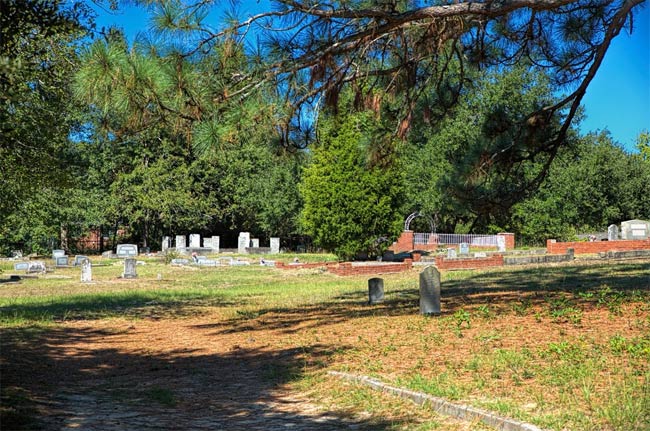 Funerary art depicting personalized grave sites and local burial customs are seen throughout the cemetery, which now covers nearly 10 acres. At one plot, a metal awning shields a grave from the elements, while another is defined by an ornate iron fence capped with a decorative iron arch. 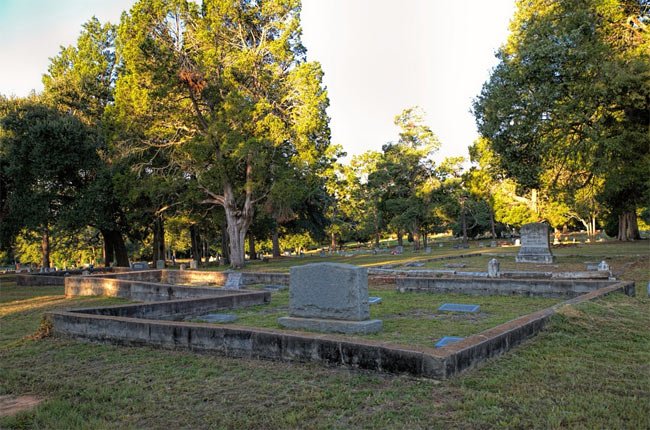 Notable people interred here include Vincent Green, who donated the first 10 dollars towards the building of the Immanuel School established by the Reverend W.R. Coles. It is suspected that Coles himself is buried here in an unmarked grave, as his death certificate states that he is buried in Aiken. Pine Lawn is also the resting place of E.P. Stoney, described as an “Activist Republican.” Stoney served his community as a marshal of the 1870 United States Census and Intendant of Aiken in 1871, 1872, 1873, and 1876. 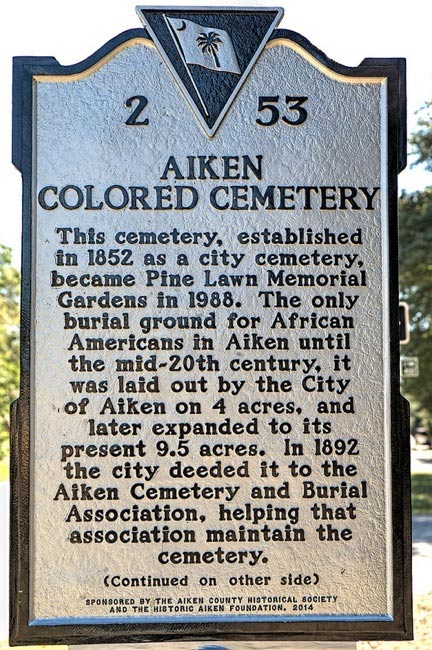 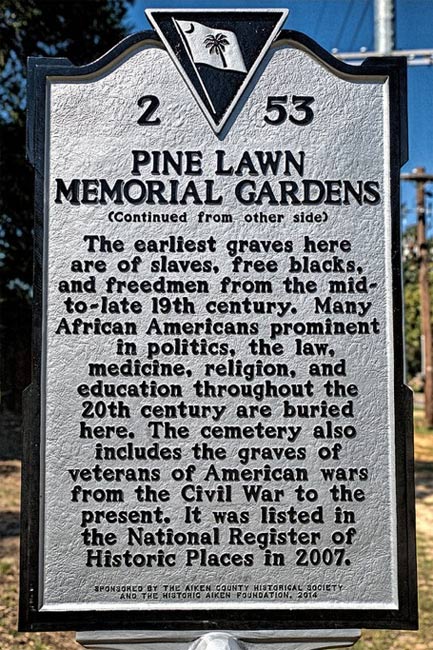 Pine Lawn Cemetery is listed in the National Register as Aiken Colored Cemetery:

Aiken Colored Cemetery, established in 1852, is the principal burial ground for African-Americans in the City of Aiken. It is significant for its long association with the African-American community in Aiken, as represented by the graves of slaves, freedmen, prominent leaders of the Reconstruction era in Aiken County, merchants, bankers, lawyers, doctors, ministers, and educators in Aiken and Aiken County from 1852 to the mid-twentieth century. It is also a locally significant and intact example of a vernacular cemetery, still in use today, illustrating common black burial customs over a period of more than one hundred and fifty years. The cemetery, now Pine Lawn Memorial Gardens, was the only public burial ground for African-Americans in the City of Aiken from the mid-nineteenth century through the mid-twentieth century.

Purchased by the City of Aiken from James Purvis in 1852, this cemetery, originally four acres but later enlarged to the present 9.5 acres, also served as a public burial ground for paupers. The cemetery’s monuments consist almost entirely of marble, granite, and cement in the form of tablets, ledgers, and obelisks with an occasional vault-top marker and a unique arched brick vault. Many plots have a central family stone with smaller individual markers. Many graves are simply unmarked. The lots display a variety of boundaries, mostly low concrete block, brick, and marble walls and wrought iron fences of various styles, some with gateways and brick pillars. The cemetery’s landscape includes predominant plantings of massive cedars, historically appropriate for nineteenth-century African-American cemeteries, pines, and oaks. In the spring, “living memorials,” also common to African-American cemeteries, of daffodils bloom on some plots and in the summer, daylilies.