The Pendleton Farmers Society in the historic community of the same name was organized in 1815. The town of Pendleton was laid out in 1790 as the county seat for what was then Pendleton District. The town’s design is virtually the same as it was over 200 years ago, with the Village Green serving as the center. In 1826 the state legislature decided to divide Pendleton District into two different districts: Anderson and Pickens districts, now counties. A new courthouse for Pendleton District was still under construction when the district was divided. 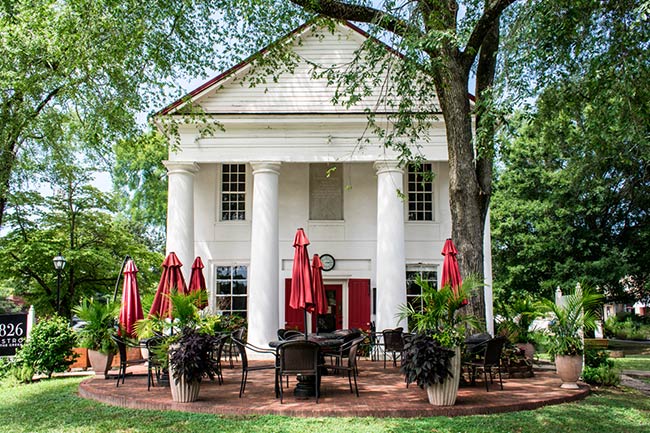 Plans for the Farmers Society to build a lodge had been underway since 1818, but nothing had come of the effort. Once building ceased on the courthouse that was slated for the defunct Pendleton District, the Farmers Society saw an opportunity for its new lodge. The organization purchased the semi-built structure, completed it in 1828, and as a result experienced a revival of interest in the club. Apparently, the society had waned prior to the acquisition of the Farmers Society Hall, as an announcement to members regarding the new building claimed that the organization “has in years past been in a state of torpidity.” Indeed, the society once again flourished. 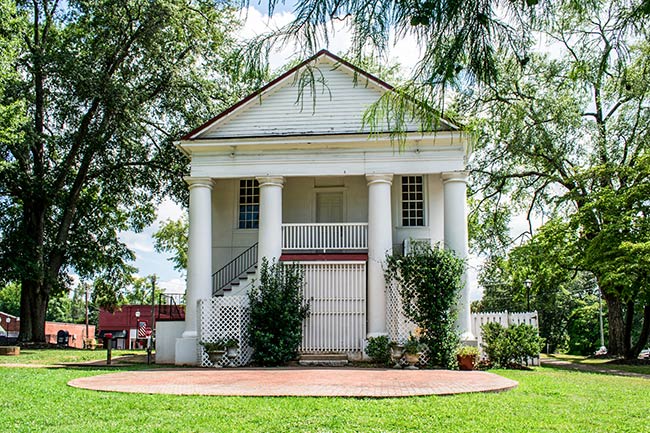 Illustrious members include Colonel Thomas Pinckney, brother of Charles Cotesworth Pinckney, who served as a delegate as the Constitutional Convention. Colonel Pinckney also served as the group’s first president; his son, also named Charles Cotesworth Pinckney, was a member alongside his father. Former Vice President of the United States John C. Calhoun for a time served as the society’s president, and Clemson University namesake Thomas Clemson was an active member of the group. 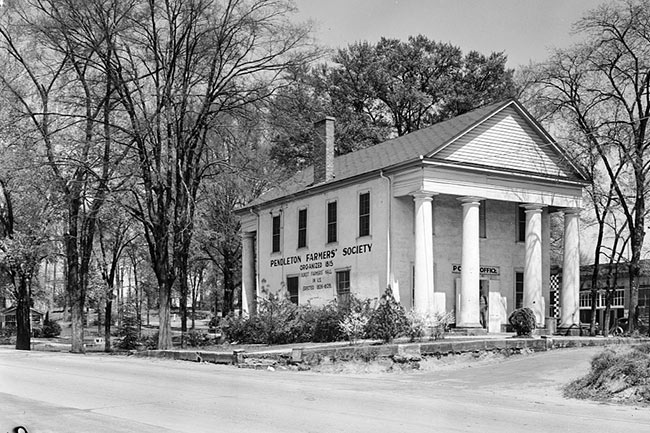 The two-story classic Greek Revival building is located on Exchange Street, where it serves as a centerpiece of downtown. The first floor was originally used by the United States Postal Service, but it has since been converted into a restaurant called 1826 on the Green. Local farmers still utilize the second floor for events, making the building the nation’s oldest farmers hall in continuous use. 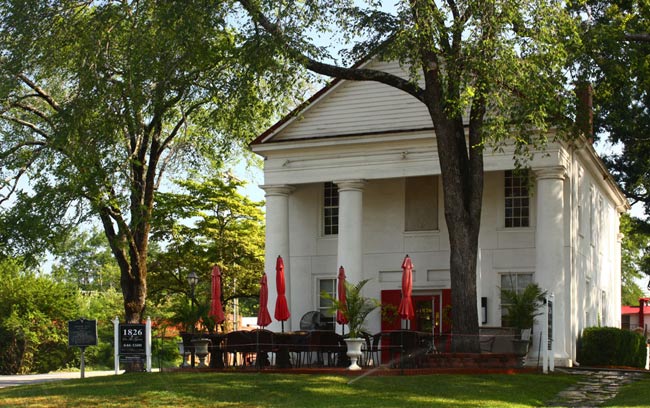 Gary DuBose of Seneca © Do Not Use Without Written Consent

Farmers Society Hall is listed in the National Register as part of the Pendleton Historic District:

Pendleton, original county seat of Old Pendleton District (now Anderson, Oconee, and Pickens counties) is one of South Carolina’s earliest upcountry towns. The town was laid out in 1790 and is basically unchanged. The village green remains the focal point. Dogwoods line many streets; massive cedars and oaks are dominant throughout the area. More than 50 buildings of eighteenth and nineteenth century significance remain, the majority within the town limits. The district includes more than a dozen historic sites. Properties in the district include commercial, religious, and residential examples. The architecture reflects the early settlement by families from Pennsylvania, Maryland, Virginian and North Carolina, as well as a later influx of summering Charlestonians. Styles and types range from Greek Revival to Gothic Revival, I-Houses to Bungalows. Early houses were generally built on a central hall plan, with two rooms downstairs with a rear ell. A later style, ca. 1830-1840, was one-story, sometimes on a raised basement that housed workrooms. The “Charleston-style” houses had large porches on 2 or 3 sides, with the basic house shape being a cube, with 2 to 4 rooms on each floor. Construction was typically of wood frame, although stone and brick examples survive as well.