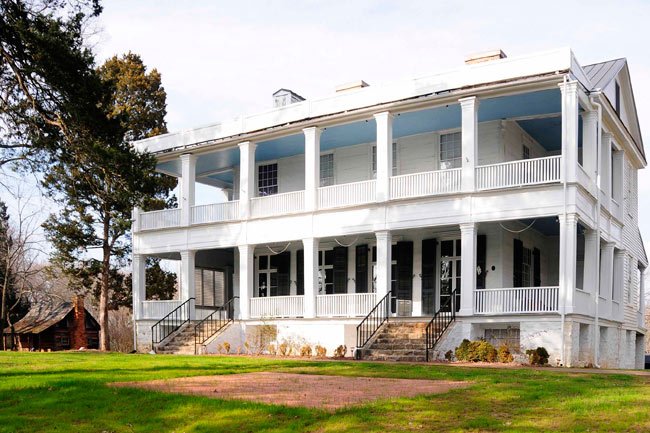 Open for tours, Woodburn is listed in the National Register:

(Frank Place) Woodburn is significant historically, architecturally and culturally. It is an excellent example of an early nineteenth century plantation house. The house was believed to be built circa 1830 by Charles Cotesworth Pinckney, son of Andrew Pinckney, an early SC Governor, statesman, and agriculturalist. Charles Cotesworth Pinckney graduated from Harvard University, studied law, but became a large planter, cultivating over 2,000 acres of rice on several plantations. He became SC Lieutenant Governor in 1833. The house reflects both the architecture of “Charleston type” houses constructed in the upcountry and Early Classical or Greek Revival stylistic influences. Many planters built summer homes in Pendleton to take advantage of open space and summer breezes. Woodburn, with its large rooms, extremely high ceilings, and central hallways, is typical of the Charleston influence that is part of Pendleton’s character. The house is four stories with two huge front porches, one directly above the other. Two double French doors open from both front drawing rooms. There are wide window and door moldings outside, deeply fluted with Greek key designs; the interior contains similar moldings containing the Federal star. There are nine fireplaces. On the second level a large porch extends across the back of the house, with a stair leading to a herringbone brick terrace below. Woodburn is situated on a promontory with a view of the countryside and mountains. The property also contains several outbuildings. The Reverend Dr. John B. Adger, a son of wealthy Charleston parents, enlarged Woodburn in the 1850s. Augustine Smyth, another early owner, created a model livestock farm, specializing in race horses and purebred cattle. Listed in the National Register May 6, 1971.