The Okatie Highway Bridge takes travelers from the mainland of Okatie (near Hilton Head) to Lemon Island. It crosses the Chechessee River and is part of South Carolina Highway 170. 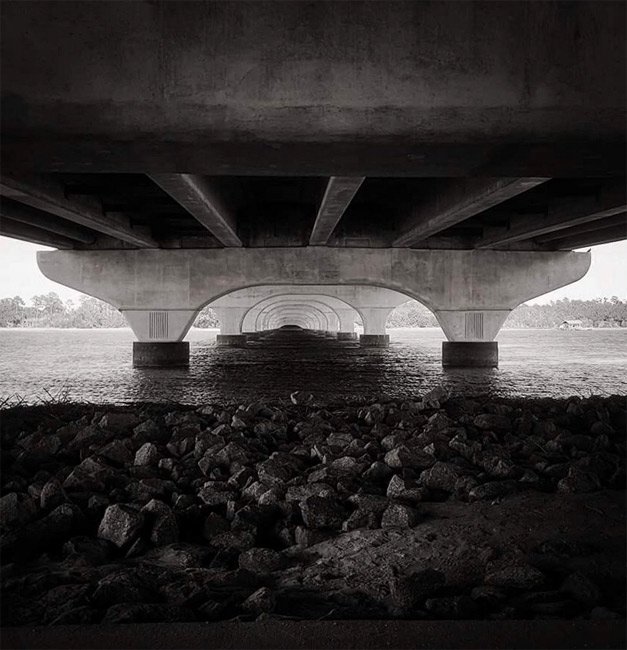 Trent Caldwell of Beaufort, 2016 © Do Not Use Without Written Consent

Once the site of Strawberry Hill Plantation, Lemon Island is now home to just a handful of residents. Situated between the Chechessee and Broad Rivers, most of the 500-plus-acre island is under conservation easement. There are only a few luxury homes on Lemon Island – despite the fact that a four-lane highway runs through it.

After touching down on Lemon Island, SC Highway 170 begins its ascent over the Edward Burton Rogers Bridge, which spans the Broad River. The remains of a former two-lane drawbridge can be found on the north side of the new bridge. The old bridge serves as an 1,800-foot fishing pier.

SC Highway 170 is known as the Robert Smalls Parkway where it passes through Port Royal.

Reflections on the Okatie Highway Bridge

Contributor Trent Caldwell, who sent the photo above, writes, “I was inspired by the shapes and contrasts under the bridge going over the Port Royal Sound – just one of many beautiful spots in Beaufort County. This was taken after taking my nephew to the Port Royal Maritime Center [on the mainland] to learn more about the unique ecosystem of the sound.”

Landmarks Near the Okatie Highway Bridge