This undeveloped greenspace occupies a city block in downtown Beaufort. The Green, as it is known, has been used as a park for more than 150 years, though until recently the property was owned privately by a local family. 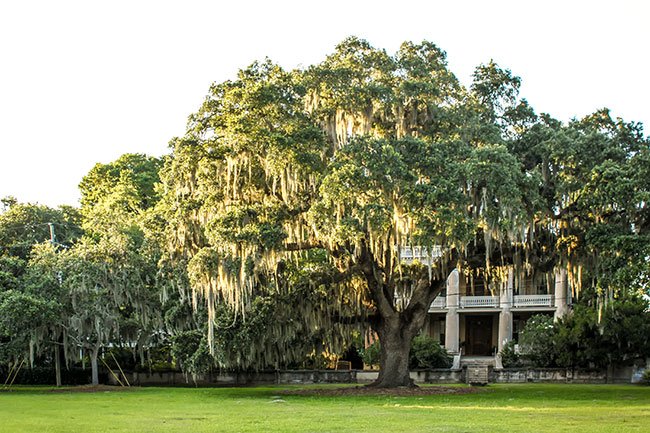 The Gray family owned this acre of land, which had been divided into two parcels. Working with the Beaufort Open Land Trust, John and Molly Gray donated the eastern half of the property to the Open Land Trust and sold the western half to the organization for 40 percent below market value in 2010. The land trust was able to purchase the parcel with the support of Beaufort County‘s Rural and Critical Lands program, the City of Beaufort, and donations from private citizens. Use of the space will remain the same – a place to relax and enjoy the surrounding environment.

The Green is located in the Old Point section of downtown Beaufort, where it is bordered by King Street to the south, Short Street to the east, Laurens Street to the north, and Pinckney Street to the west. The old park anchors many historic homes, including The Oaks.

The Green is listed in the National Register as an open space and a park in the Beaufort Historic District:

The town’s present appearance owes much to the events of the period between ca.1860 and ca. 1935. The buildings and structures constructed during this period display a variety of architectural forms and styles, including Italianate, Gothic Revival, Victorian, Queen Anne, and Neo-Classical, and reflect the development of the town in the last half of the nineteenth century and early twentieth century. In the 1870s, more modest houses were built on vacant lots in the older parts of town. One type was a five bay I-house, similar in form to many of the antebellum mansions, but reduced in size and of balloon construction using sawn lumber. The second type was a three-bay, gable fronted house, often with Italianate or Eastlake detail. Many antebellum homes were also updated during this period with commercially milled porch details, bay windows, and larger window glass. Colonial Revival made an impact on residential building after the hurricane of 1893, and the bungalow dominated new construction before and after World War I. Commercial construction also reflected increasing prosperity.

Plan Your Trip: The Green