This ornate house along the scenic Battery in Charleston was built between 1885 and 1886 as the town home for Charles Henry Drayton. Local architect W.B.W. Howe designed the Eastlake home with Medieval European and Chinese architectural features. In fact, it is said to possess the finest Eastlake detailing in Charleston. The home was originally built in white brick with black grout; it was later stuccoed. 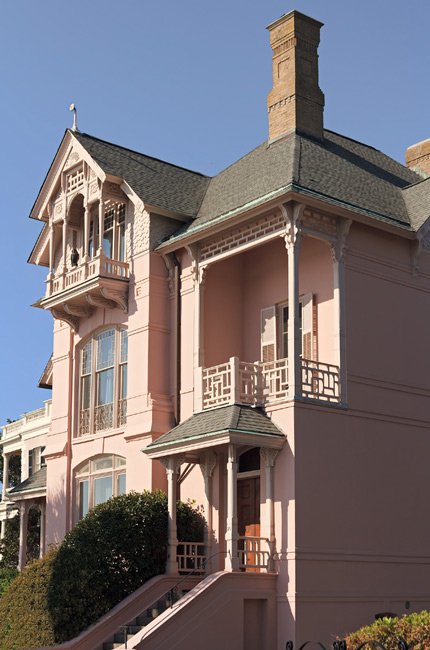 Kenneth Dodds of Charleston, 2012 © Do Not Use Without Written Consent

Charles Henry Drayton inherited Drayton Hall Plantation along the Ashley River as a five-year-old child in 1852. Due to Drayton’s status as a minor, Drayton Hall was managed by his uncle, John Drayton, until Charles became an adult at the end of the Civil War. Drayton Hall had been spared during the war – though no one knows for sure why – and after the war John Drayton contracted with strip miners to mine the river along their property for phosphates. Phosphate mining was an industry pursued by many Lowcountry planters after the collapse of rice growing following the war due to the loss of slave labor.

By 1881 Charles Drayton had created his own mining company, Charles H. Drayton and Company, and Drayton Hall was the business site. The company operated until the beginning of the twentieth century and included a narrow gauge railroad, housing for employees, and an office. Charles Henry Drayton died in 1915. His town home changed hands over the following years, and though it has undergone modifications, it has retained its original integrity.