The College of Charleston was founded in 1770 and chartered in 1785 to “encourage and institute youth in the several branches of liberal education.” Located in the heart of downtown Charleston, today the college is a renowned liberal arts and science school that has successfully retained its historic character while offering students state-of-the-art facilities. 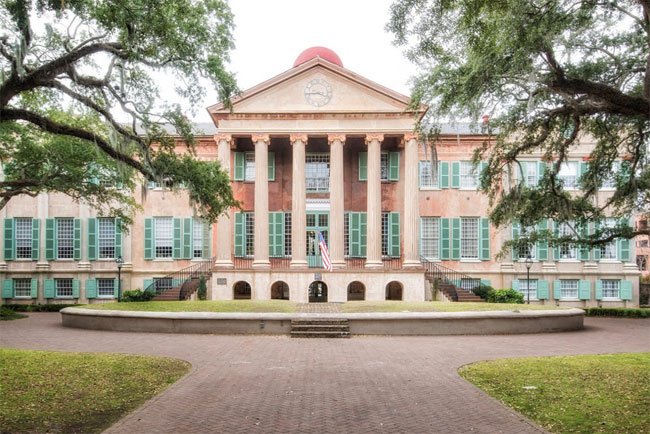 The school is the oldest college or university south of Virginia and is the 13th oldest institution of higher learning in the United States. From 1790 until 1829, the college held classes in barracks leftover from the Revolutionary War.

The Main Building, now called Randolph Hall, was designed by architect William Strickland and completed in 1829, giving students a proper academic building of their own. 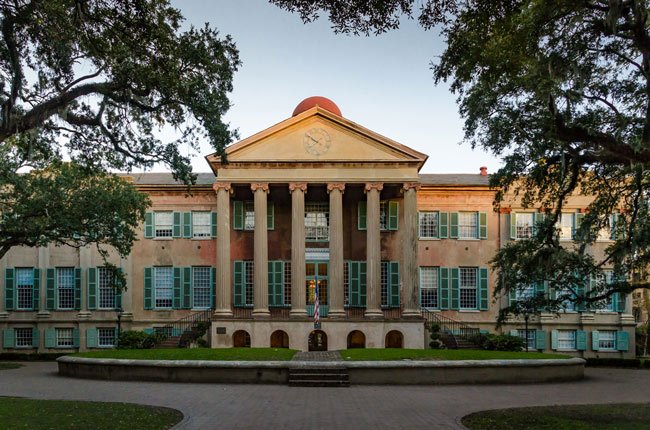 Noted Charleston architect E.B. White enlarged the building in 1850 as part of a campus expansion, adding six columns and giving the building its beloved appearance. In front of Randolph Hall stands an old cistern, seen above, which was built in 1857 to help control flooding and fight fires. Eventually this technology became outdated and the cistern was filled in and covered with grass. The Cistern Yard is shaded by live oak trees and is a favorite spot for students to relax and study. It is also the location of the College’s graduation ceremony each May on Mothers’ Day. 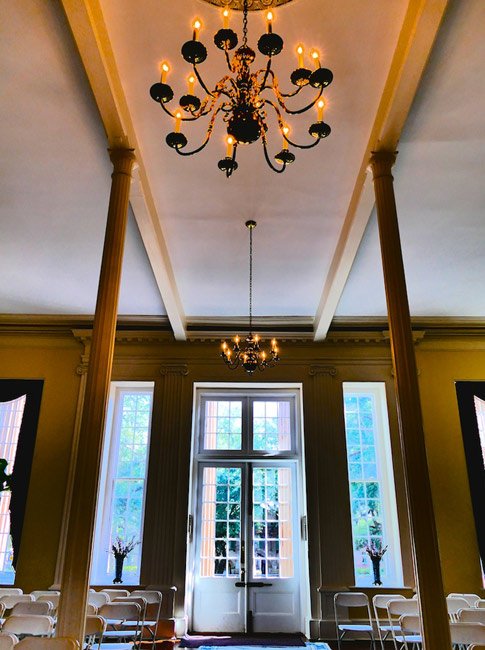 In this view, taken by George Cook, you can see that during the Earthquake of 1886 that the wings that flanked the central portion of the building collapsed. 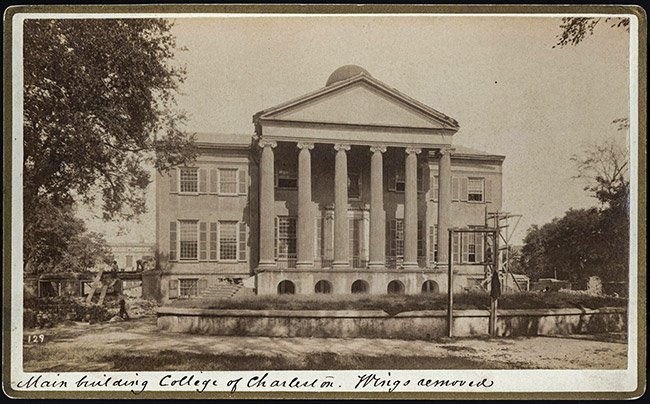 In 2017, the College of Charleston started a holiday light show which includes decorating Randolph Hall and the Cistern yard in lights. The now annual event, lasting roughly two weeks each December, has gained popularity and is quickly becoming a must see during the holiday season in Charleston. Animated music and lights play every hour from 6 to 9 p.m. with light refreshments served. 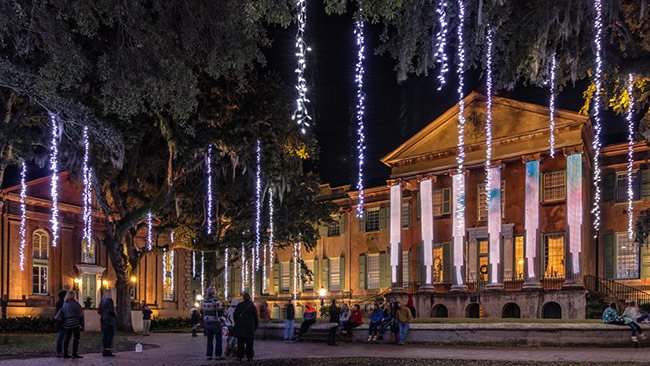 As part of the expansion, E.B. White also designed and added the Gate Lodge, known as Porter’s Lodge (seen above), in 1852. The building complements Randolph Hall in its Roman Revival style and was added for the purpose of housing the college’s caretaker, or porter. 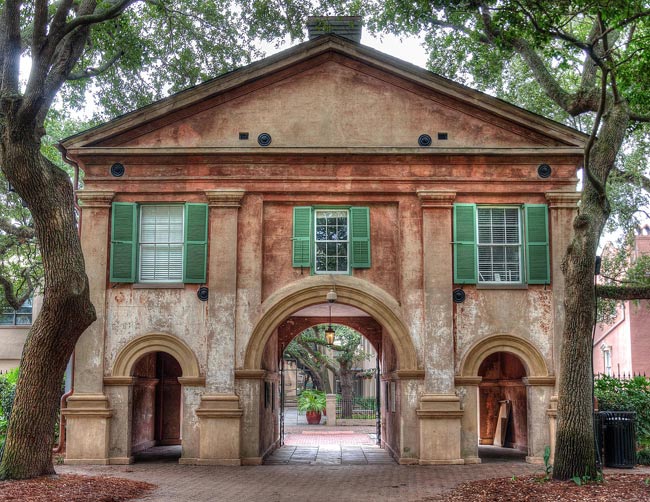 Legend has it that college porter John Cahill remained on campus during the 1865 Union occupation of Charleston during the Civil War and guarded the school by requesting protection from Union Commandant, Colonel Stewart Woodford. The request was honored, and the College of Charleston was spared when so much of the city was destroyed. 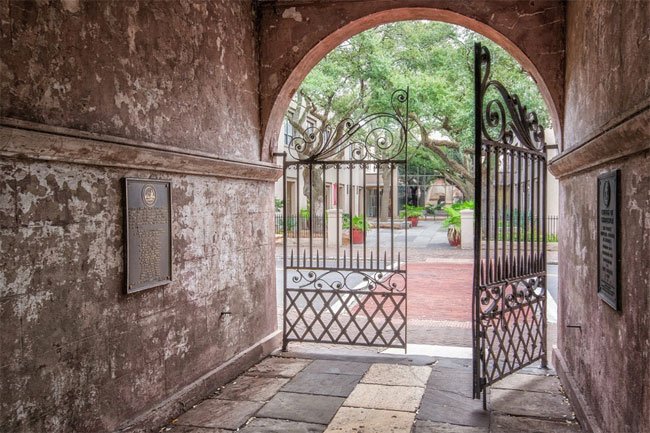 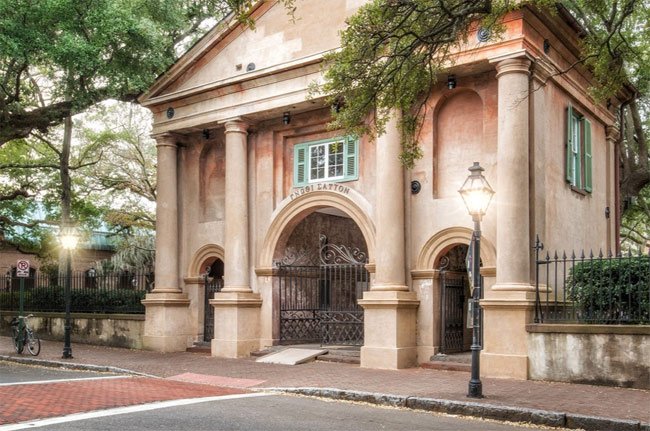 The open gates from George Street look upon the arched pathway, underneath the Porter’s Lodge, onto the Cistern Yard, and Randolph Hall beyond. 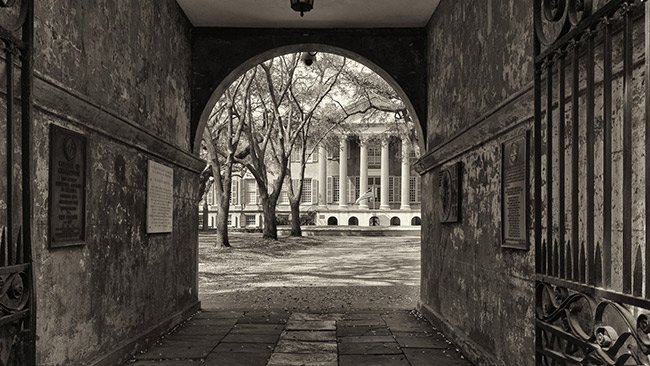 The college’s first library, pictured below, was built in 1855 of necessity, as by 1853 the campus was in dire need of a place to store its growing collection of books. The acquisition began in 1770 – the year of the college’s founding – when John McKenzie bequeathed 1,200 volumes to the burgeoning institution. 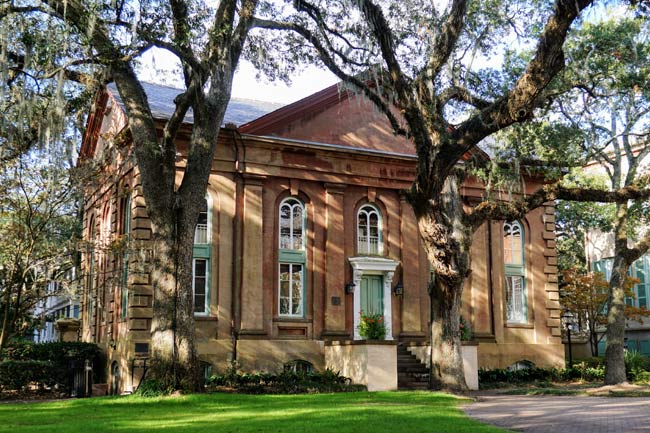 Connie Fowler of Mount Pleasant, 2016 © Do Not Use Without Written Consent

The collection grew but did not amass until Lingard A. Frampton gifted the college with 3,873 books in 1853. As a result, the state and city both contributed towards the funding of a library building. 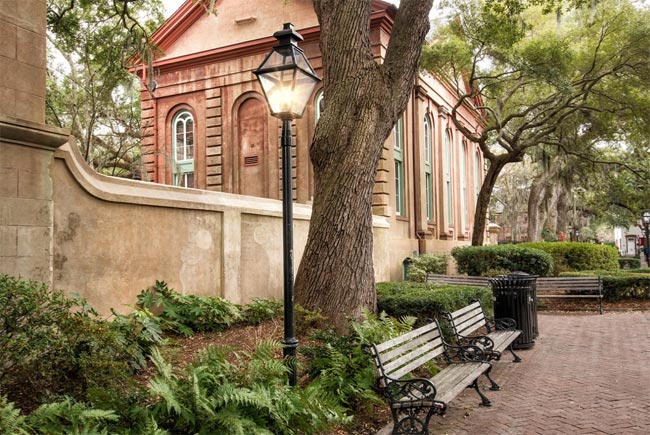 The library was designed in the Classical Revival style by George E. Walker and also displays Italianate details. The arches in the windows of the stuccoed building are in symphony with the arches of Porter’s Lodge. The building was named for Edward Emerson Towell, an alumnus, former chemistry professor, and Academic Dean of the College of Charleston. Today the building serves as admissions offices. 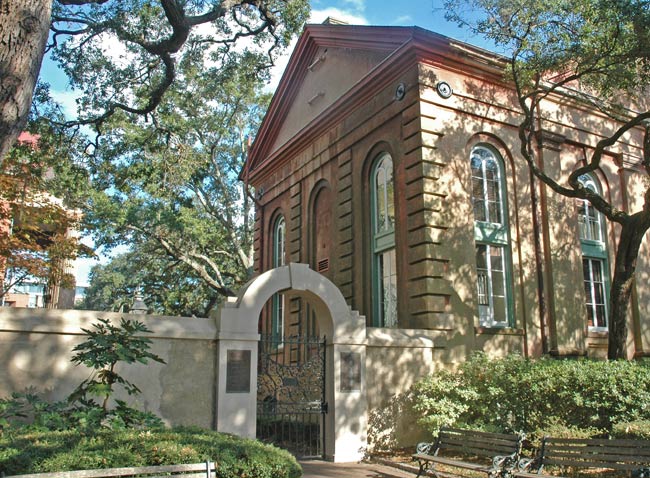 Susan Buckley of Charleston, 2016 © Do Not Use Without Written Consent

The Sotille House, shown below, is a Victorian manse built in 1890 by banker and merchant Samuel Wilson. It is known for its exquisite stained glass windows and intricate woodwork. The Sotille family purchased the home in 1912, and the College of Charleston acquired it in 1964. It has served as student housing and offices; today it is the location of the school’s Division of Institutional Advancement. 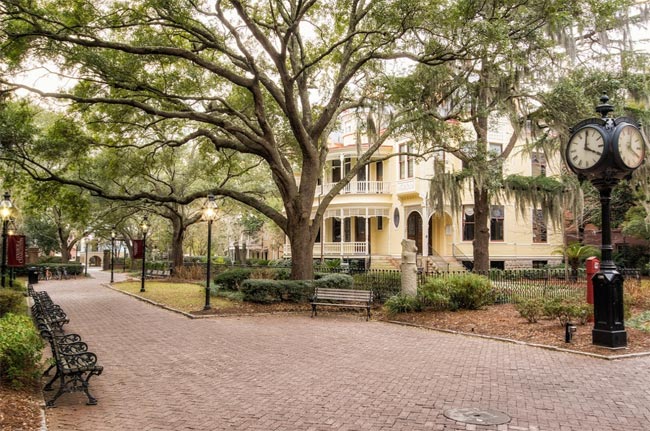 This frame building was constructed in the 1830s by Abiel Bolles, a scholar from Connecticut who opened the Charleston Female Academy shortly after his arrival to the city in 1807. Bolles built three frame houses for his academy: 5 College Way in 1826, followed by 7 and 9 College Way in the 1830s. The Erckmann House, seen here, stands at 9 College Way and was purchased by a surgeon from the Medical University of South Carolina, Dr. John Bellinger, in 1835. 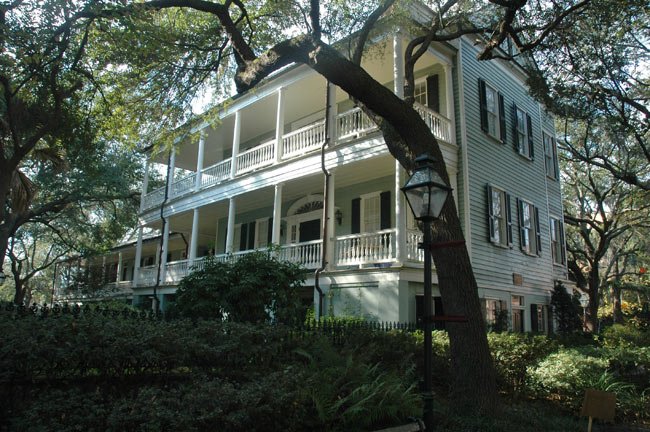 Susan Buckley of Charleston, 2016 © Do Not Use Without Written Consent

For nearly a century, the home was owned by the Follin family, and the last Follin descendant to own the home was John A. Zeigler, Jr. From 1946 through 1971, Zeigler and Edwin Peacock operated the Book Basement here, which for years was Charleston’s only bookstore. All three of the buildings that comprised the former Charleston Female Academy were acquired by the College of Charleston in 1971. The college restored the historic buildings and now uses them for faculty offices. The Erckmann House serves as offices for the Department of Communication.

Today the residence is known as the Erckmann House in honor of Harry L. Erckmann (1878–1963), a College of Charleston graduate and member of the state legislature. Mr. Erckmann served as the college’s attorney and successfully persuaded the trustees to privatize as a means of avoiding integration. In 1949, after receiving applications from local black high school students, the college was awarded a new charter and Charleston’s city council transferred ownership of the college back to its board. It remained segregated until 1966. After the Department of Health, Education, and Welfare informed the college that students would be unable to borrow money if it did not allow minorities to enroll, it acquiesced and by 1970 had again came under state control.

Students are always invited to sit on the welcoming porch seen above, which serves as the Lee and Ann Higdon Student Leadership Center. The center is located in an historic Charleston single house built prior to 1817 for Nathaniel Farr and his wife, Katherine. The building is named for former college president Lee Higdon, who served from 2001 through 2006, and his wife, Ann. 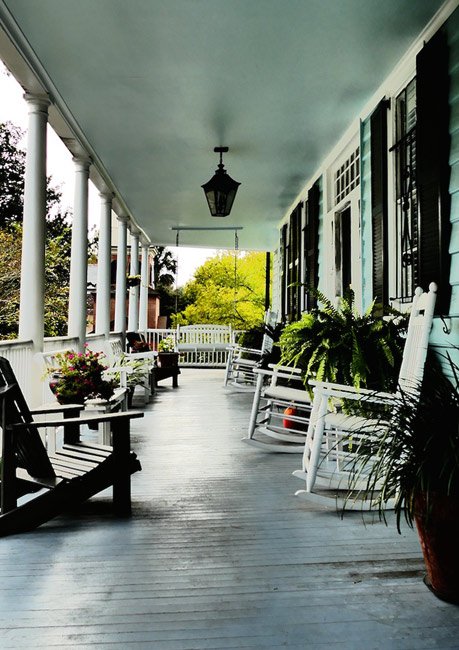 Above, the Pi Kappa Phi bell tower stands at 40 feet tall. It was a gift to the college from the fraternity to commemorate the organization’s Centennial in 2004. The College of Charleston is the site of the fraternity’s Alpha chapter, and since its founding in 1904, members have also gifted the college with a memorial gate (1929), the clock on the pediment of Randolph Hall (1954), and a campus rose garden (1979). 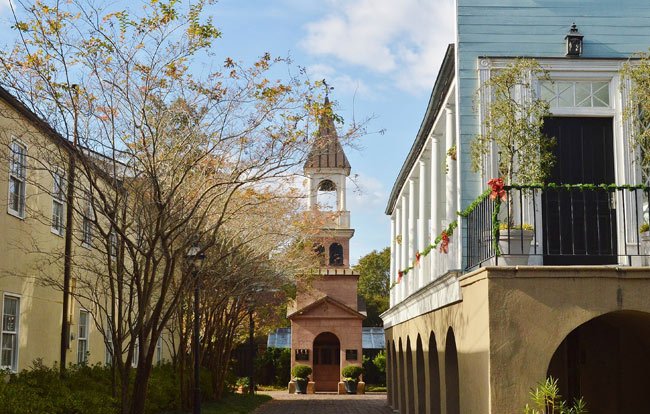 Terri Bowman of Mount Pleasant, 2016 © Do Not Use Without Written Consent

Located at the southern edge of the College of Charleston campus at 18 Bull Street, the William Blacklock House is one of the nation’s finest examples of Adamesque architecture. The three-story home was constructed in 1800 for William Blacklock, a wealthy merchant who was a member on the board of the Branch Bank of the United States in Charleston. The house was acquired by the College of Charleston in 1974 and has been restored as close to its original state as possible, it is used as the Office of Alumni Relations. 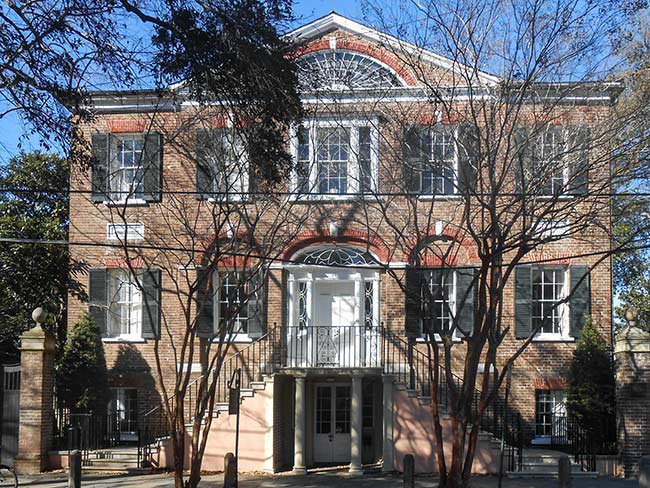 Profreader of Wikimedia Commons, 2014 © Do Not Use Without Written Consent

Originally known as the Reverend Robert Smith House, this pre-Revolutionary structure was home to Robert Smith, the first Episcopal Bishop of South Carolina, and coincidentally, the first president of the College of Charleston. The house was built in 1770 and was acquired by the college in 1965 by Herbert DeCosta for use as a residence for the president of the school. The house was occupied the following year and when president George Benson moved out in 2014, renovations began to fix water infiltration problems totaling $100,000. 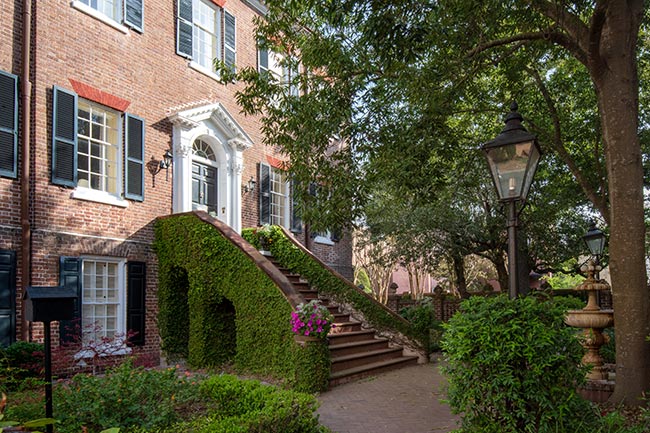 Jayson Doyle of Goose Creek, 2019 © Do Not Use Without Written Consent

Randolph Hall (interior, seen above), Porter’s Lodge, and the Library are listed in the National Register as part of the College of Charleston:

The historic campus of the College of Charleston contains three structures, the Main Building, the Library, and Gate Lodge, situated in an attractive setting of evergreen oaks, that achieve a certain degree of unity by means of the prevailing Pompeian red coloring of their stuccoed walls. The Main Building, designed by William Strickland and built in 1828-29, was a simple, rectangular two-story over elevated basement brick structure with a pedimented three bay wide projecting pavilion on the south (main) façade and gable ends on the east and west sides.

In 1850 Edward B. White added large two-story brick and stucco wings to the east and west sides and the present grandiose colossal portico, with six giant Roman Ionic pillars and arcaded basement, to the center of the main façade. In 1930 the west wing was extended to reach College Street. The Gate Lodge, also designed by White and built in 1852, is a rectangular two-story brick and stucco structure in the Roman Revival style. Four giant pillars of the Tuscan order rise to support the pediment that extends across the entire street façade of the structure. The Library, constructed in 1854-56 and designed by George Edward Walker, is a two-story brick structure in the mid-nineteenth century Classical Revival style with Italianate details, quoins, and round-headed windows. Inside, a central reading room rises two stories and is surrounded by a gallery.

Plan Your Trip: College of Charleston