Note: Parts of this entry correlate with and expand upon our entry for the Isle of Palms Pier, which we recommend as well. If you have historical photos of the Isle of Palms, or stories about its early days, please let us know!

The Isle of Palms, located in Charleston County, lies across the Intracoastal Waterway from Mount Pleasant, just north of Sullivan’s Island. It was originally inhabited by Sewee Indians. A 1696 map by Pierre Mortier labels the island – along with its northern neighbor, Dewees Island – “Hunting Islands.” 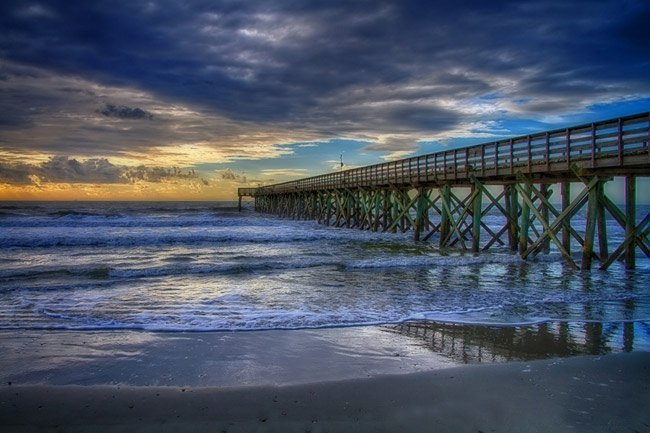 Pirates who pillaged the eastern seaboard during the late 17th and early 18th centuries are said to have called it Long Island because it was the longest island between the Charleston peninsula and Cape Romain‘s Bulls Bay, where colonists had constructed a Martello Tower to watch for invading ships. This name eventually stuck, and by at least 1784, the island’s owner, William Scott, referred to it as such. In the newspaper clipping below, Scott forbids trespassers to hunt or fish on his properties, which included both Long Island and Goat Island, a small island located northwest of the Isle of Palms which goes by the same name today.

William Scott’s daughter married a Swinton in the late 1700s, and between them, these two families owned the island for well over a century. It is likely one or both operated a rice or indigo plantation. Two large residences, as well as slave quarters, were erected here (1). Members of the Swinton family also listed themselves as oystermen in a census taken in the late 1800s. Today, Scott’s Creek and Swinton Creek remind us of these early owners. 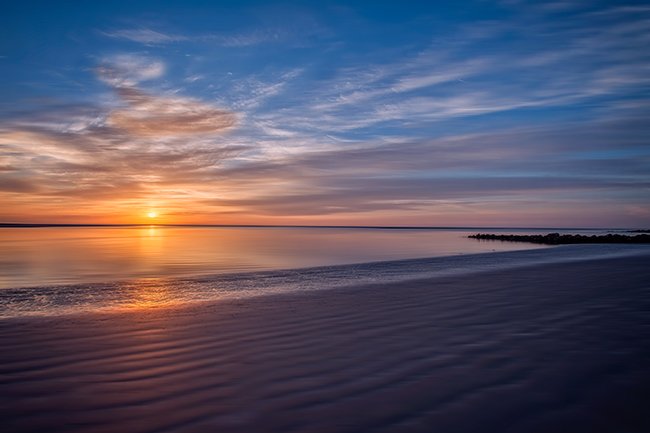 The Isle of Palms did not acquire its current name until 1899 when it was purchased by Dr. Joseph S. Lawrence of Beaufort, president of the Charleston and Seashore Railroad Company, who christened it Isle of Palms – both in honor of its abundance of palmetto trees and as a means to attract tourists.

Vintage City Maps, 1902 © Do Not Use Without Written Consent

In a lavish pamphlet commissioned for Lawrence’s new resort, trolley access to the island is described as follows: “Crossing Breach Inlet, through the Steel Drawbridge, the Isle of Palms is reached, and a ride of two miles lands you at the terminal station. Immediately connecting with the station is the pavilion, occupying a waterfront of 2,000 feet, the largest pavilion on the Atlantic’s coast.” 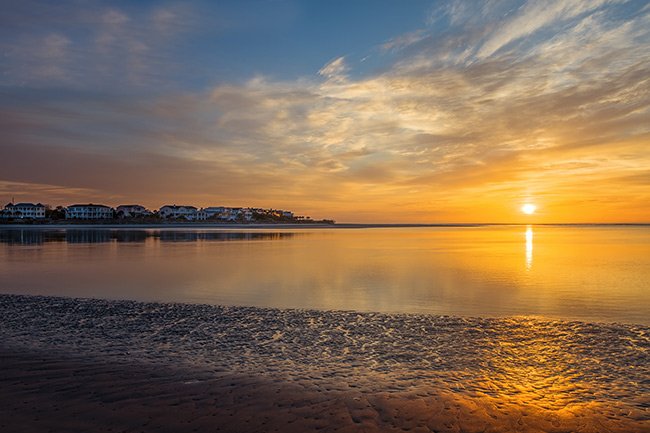 Steve Rich of Aiken, 2015 © Do Not Use Without Written Consent

At that time, the pavilion featured electric lights, afternoon and evening dances, live music performed by the First United States Artillery Band, and an attached dining room which advertised “linen of immaculate whiteness, china and glassware of the most modern and approved patterns, first-class service, and a tempting menu.” 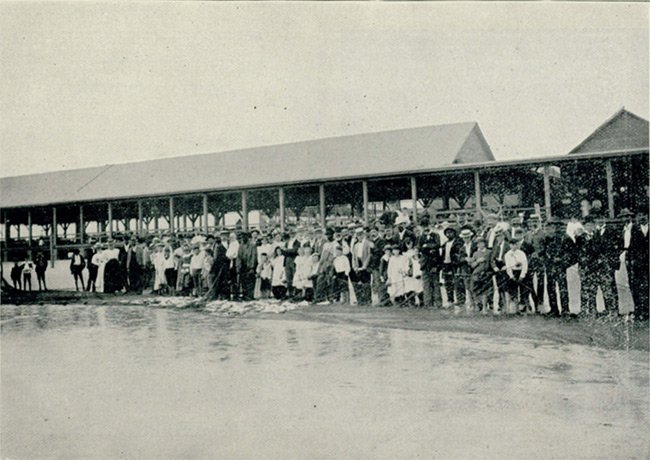 Fish fries and oyster roasts were held regularly, and the publication features photographs of men in suits and women in long dresses pulling a 500-foot seine along the shore. By then the resort was also home to a Ferris wheel imported from Atlantic City and an early rollercoaster imported from Coney Island. The Ferris wheel, which was illuminated by 500 electric lights, could be seen from High Battery in Charleston. 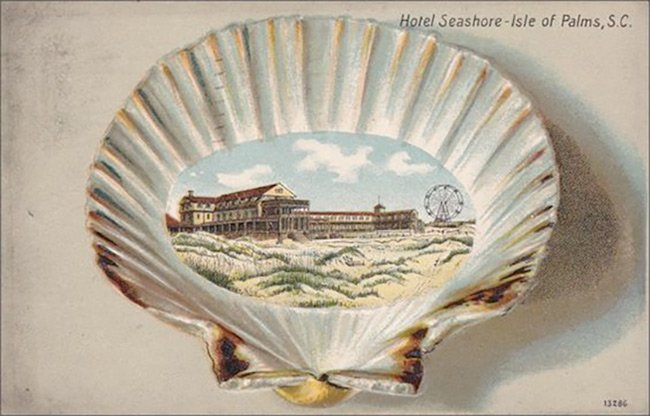 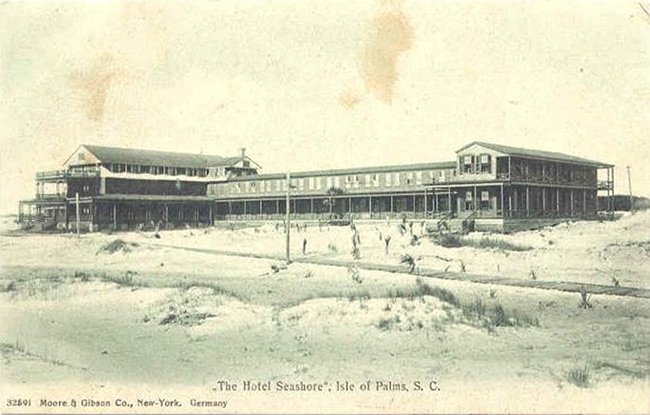 Frank “James” Sottile (sah-tilly) became the sole owner of the Isle of Palms in 1914, notwithstanding a few private lots, in a $25,000 deal with the Long Island Improvement and Construction Company. Sottile was president of the Charleston-Isle of Palms Traction Company, which formed in 1913 out of a consolidated successor to the Charleston and Seashore Railroad Company. Three years later, the Hotel Seashore burned to the ground in a mysterious early-morning fire. The pavilion and amusements went unharmed, but the pavilion caught fire in the 1920s. It was rebuilt as a two-story structure with a dance floor, as seen in the postcard below. Festivities there continued well into the 1950s. 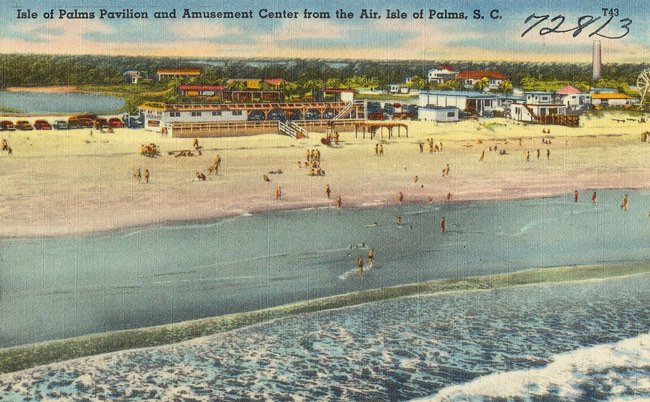 The resort suffered during the 1920s, but after World War II, the island grew into a thriving residential area for returning soldiers. A lawyer-turned-developer named John Charles “J. C.” Long, who had married Alberta Sottile, purchased 1,300 acres on the Isle of Palms in late 1944, just before the Ben Sawyer Bridge was finished. 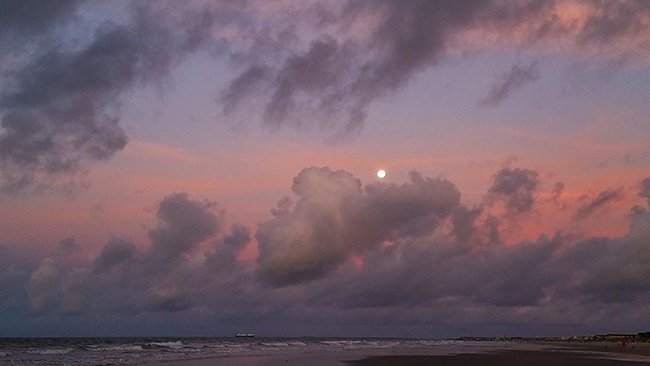 Debbie Mills of Pomona, NY, 2019 © Do Not Use Without Written Consent

In 1946 this new bridge replaced the Pitt Street Bridge and connected Mount Pleasant to Sullivan’s Island, making travel to both of the barrier islands more feasible. Funded by taxpayers, the bridge served as a boon for his budding enterprise, and Long eventually became the largest landowner in Charleston County. Today, Long’s Beach Company continues to be a powerful force in property acquisition and management, and it is now run by Long’s grandson, John Darby. 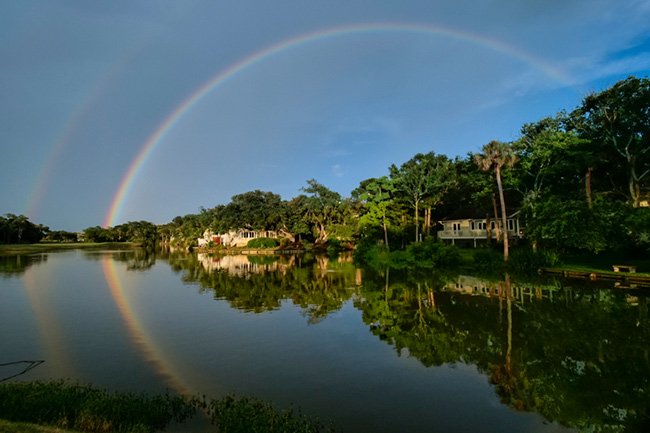 Cindy Branscome of Isle of Palms, 2018 © Do Not Use Without Written Consent

In 1993, the Isle of Palms Connector (seen in the background below) was completed, making the beach even more accessible – and more populated. Today the incorporated town is home to both full-time residents and tourists. On its northern end, Wild Dunes offers upscale accommodations to tennis and golf enthusiasts. 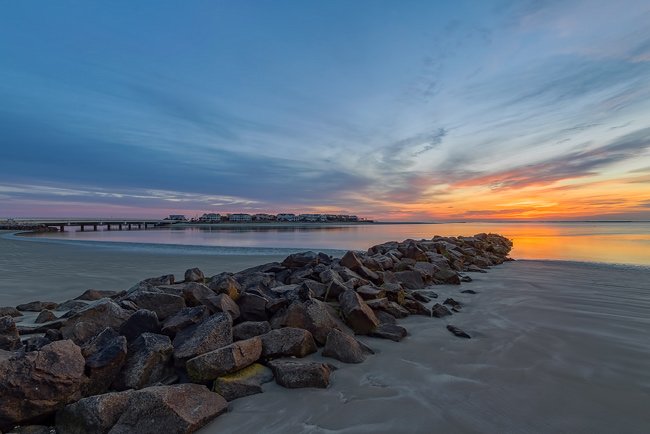 Though the pavilion and amusement rides are long gone, the Isle of Palms Fishing Pier still provides elevated access to the ocean. Built by Long in 1953, it is now owned by the Sea Cabins and Oceanside Villas. At 1,000 feet, it was once touted as the longest pier in the Carolinas. It has since been overtaken by the nearby Folly Beach Pier, which stretches 45 feet farther into the sea. 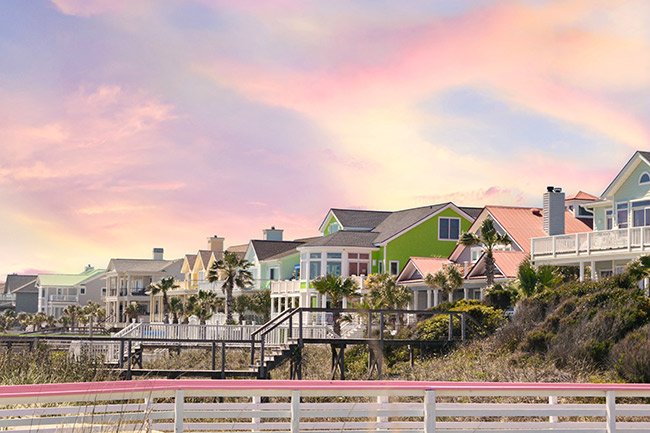 TJ Green of Charleston, 2019 © Do Not Use Without Written Consent

Reflections on the Isle of Palms

Contributor Cindy Branscome says of her photo below, which she calls Tranquility, “This was taken on Friday the 13th of January, 2017. Lucky for me! There was a sandbar that this bird was perched on and it enabled me to get low enough to catch a great angle. There is nothing more peaceful and moving to me than catching a sunrise at the beach. There is no doubt in my mind that this bird was feeling the same thing!” 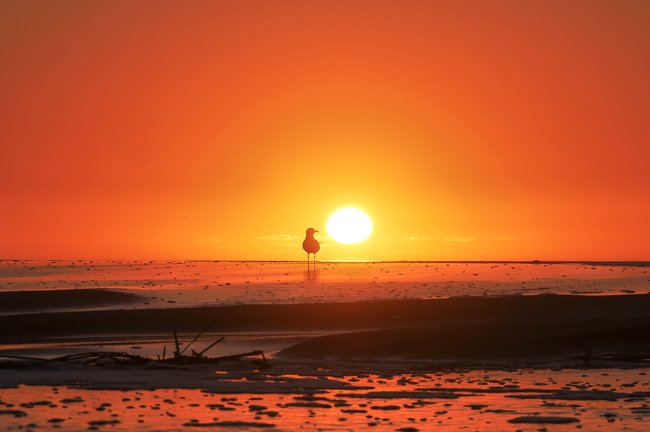 Cindy Branscome of Isle of Palms, 2017 © Do Not Use Without Written Consent

Cindy Branscome says of another photo, seen below, “This sunset view is ever changing. It’s one of the locals’ favorite places to catch a beautiful Lowcountry sunset. You can see the Ravenel Bridge, the Charleston Harbor, downtown Charleston, numerous ships, and Fort Sumter.” 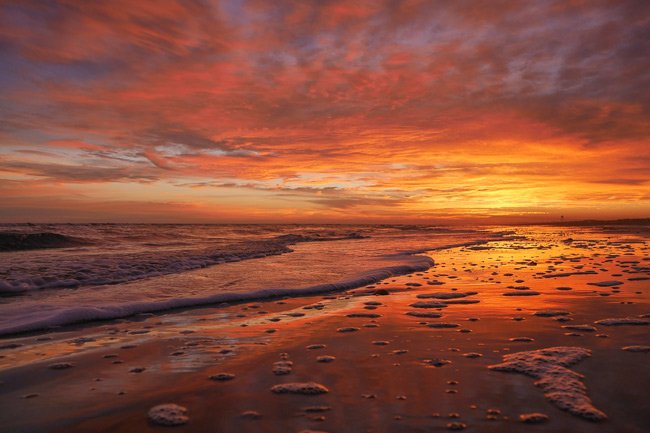 Cindy Branscome of Isle of Palms, 2017 © Do Not Use Without Written Consent

Photographer Christopher Ackerman of nearby Summerville says that Isle of Palms is “one of my favorite beaches for a sunrise and an early breakfast by the beach.” After seeing his gorgeous photo, we can certainly see why! 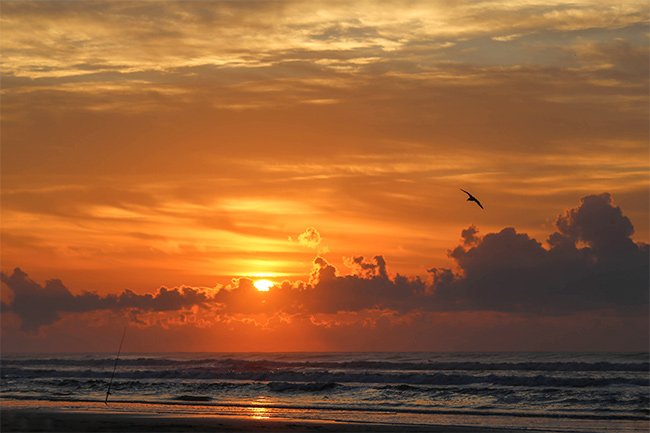 Christopher Ackerman of Summerville, 2017 © Do Not Use Without Written Consent

More Pictures of Isle of Palms 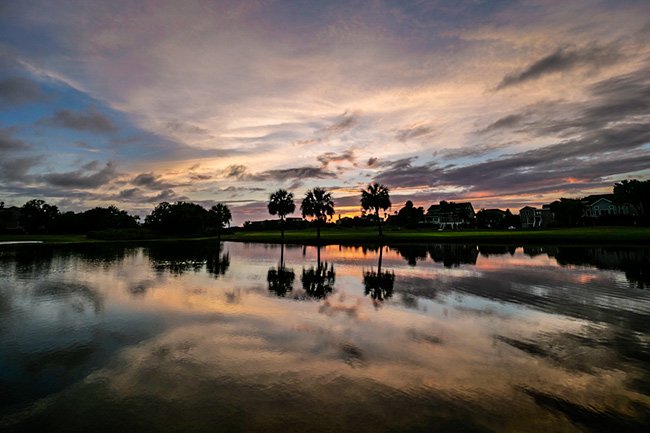 Cindy Branscome of Isle of Palms, 2018 © Do Not Use Without Written Consent

1. Learn more about possible plantations on the Isle of Palms.

Plan Your Trip: Isle of Palms