The John Y. Dupre House is the oldest residence in McClellanville. The village of McClellanville was developed in the mid-nineteenth century when town namesake Archibald McClellan and fellow planter Richard Morrison, II subdivided their plantations – Pointe Plantation and Jeremy Plantation respectively – and sold the lots to other planters for their summer homes. Though Morrison operated nearby Laurel Hill Plantation, he purchased Jeremy Plantation to divide and sell. Dr. John Young Dupre of Ashton Plantation was one of the first planters to purchase one of the new lots in McCellanville, and he was instrumental in encouraging other planters to buy and build in the village as well. Following the Civil War, many former planters left their plantations and moved into towns to become merchants and business owners. McClellanville grew into a year-round community as a result. 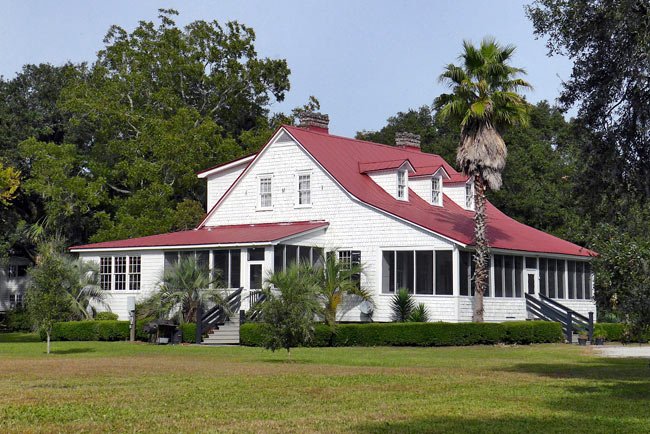 Rather than build anew, Dr. Dupre elected to relocate his grandfather’s home from Echaw Plantation. Seen here, the plantation house was built around 1790. In 1861 the home was dismantled and floated 12 miles down the South Santee River on a barge, then reassembled on Dupre’s lot. The home was restored during the rebuilding process. Soon afterwards, Dr. Dupre joined the Confederate army. He returned to McClellanville permanently after his service in the war and practiced medicine for 50 years in neighboring Christ Church Parish.

Sadly, Dr. Dupre and his wife used the plantation house as their summer home for only a brief time. Mrs. Dupre died in 1865, just a few years after the home was moved to McClellanville. Dr. Dupre sold the property to his one of his brothers, Andrew Dupre, in 1869. He remained in McClellanville, however, in a home on the same street. That home is also called the John Y. Dupre House, which can cause some confusion.

The John Y. Dupre House is listed in the National Register as part of the McClellanville Historic District: