The history of the Old Exchange and Provost Building in downtown Charleston lingers within its centuries-old walls. Tales of pirates, prisoners, Redcoats, and dignitaries prove that the Holy City has a past steeped in crime and punishment as well as freedom and prosperity. 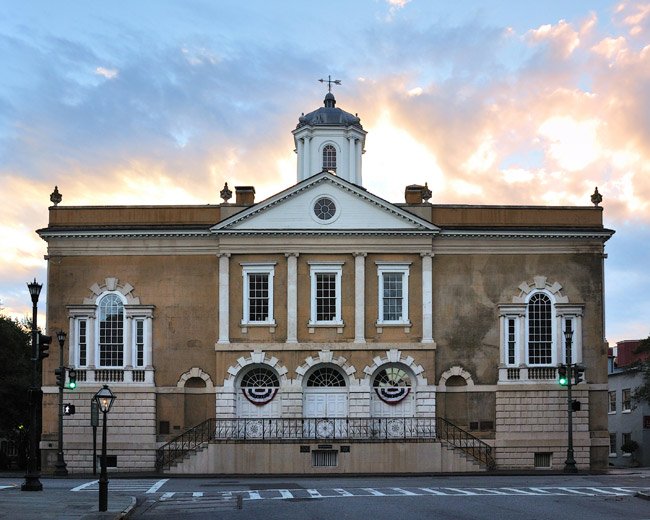 The site of the Exchange Building – as it is commonly called – was the location of Half Moon Battery, a semi-circular bastion built in 1704 when Charleston was a walled city. A two-story Court of Guard building accompanied the building of the bastion, and prisoners such as the notorious pirate Stede Bonnet were kept here while they awaited sentencing – many to death. Bonnet was hanged in nearby White Point Garden, his body tossed into the marsh. Remnants of Half Moon Battery can be seen in the building’s dungeon. 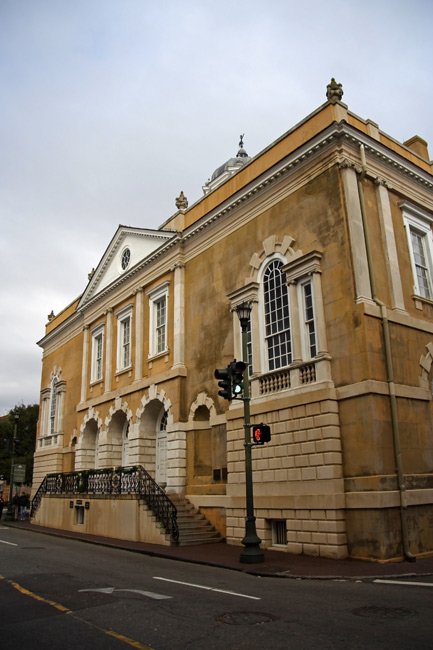 The Exchange Building was built in 1761 as a Custom House, though the building has served multiple functions over the years. In 1773, 257 chests of tea from the East India Company were seized and stored here for nonpayment of duties. The tea remained here until 1776, when it was sold in an effort to create funds for fighting the British during the beginning of the Revolutionary War. After Charleston fell to the British in 1780, the Redcoats used the building as a military prison. Notable Patriot prisoner Colonel Isaac Hayne was housed here until he was hanged for treason against the Crown in 1781. 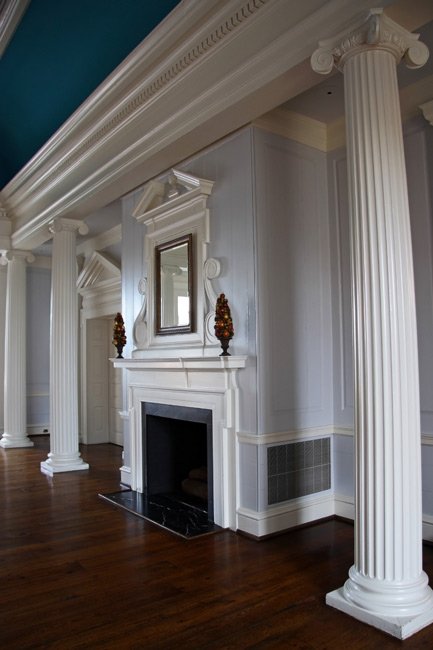 Once the war ended, the South Carolina delegation to ratify the new country’s constitution met here in 1788. Three years later in 1791, President George Washington visited Charleston on his southern tour and greeted the public from the front steps of the Exchange Building. He later was entertained in the building’s exquisite ballroom and allegedly spent an evening dancing with numerous Charleston ladies. However, in the years that followed, the same site from which President Washington waved to the city would serve as a market of human flesh.

The Exchange Building possesses a tarnished history not only due to its service as an unforgiving prison, but also because an open-air slave market existed on its grounds. By the early nineteenth century abolitionists had become active in their anti-slavery position, and when the Post Office was moved to the Exchange Building in 1815, it was overwhelmed with Charlestonians who were determined to seize and destroy the anti-slavery literature that was arriving to the city by mail.

The building remained in the hands of the federal government until 1913, when it was deeded to the Rebecca Motte Chapter of the Daughters of the American Revolution. In 1981 the building was opened as a museum and remains a highly popular spot for visitors to learn about Charleston’s storied history.

The Old Exchange Building and Provost Building is listed in the National Register:

The Exchange and Provost Building, built 1767-1771, served during the last quarter of the 18th century as a customhouse, public market, public meeting place, military prison and barracks. Confiscated tea was stored here in 1774, and the Provincial Congress of South Carolina met here in the same year. The British used the exchange as a barracks and military prison from 1780 to 1782, during the American Revolution. President George Washington was welcomed on the steps of this building when he visited Charleston on his southern tour of 1791.

The structure was badly damaged by Union artillery fire during the Civil War and again by the great earthquake of 1886. Repaired after each occasion the Exchange was used for Federal office purposes until 1913 when an act of Congress deed the building to the Daughters of the American Revolution in and of the State of South Carolina to be preserved by them as a historical monument. The building is a large two-story over elevated basement brick structure of Georgian design. It has a hipped roof and three-bay wide projecting and pedimented central pavilions on the east and west elevations. The windows are of London crown glass, decorations of Portland stone, and the roof of Welsh Carnarvon slate.

Reflections on the Old Exchange and Provost

Photographer John Diskes shares the following about capturing the gorgeous photo at the top of the page: “Getting a good photo (without people or cars) of the Old Exchange is not as easy as one would think. This was done early one morning. It’s severely backlit. I got lucky because the rising sun reflected off the clouds giving the ‘Fire in the Sky’ effect.”