Kings Mountain State Park in Blacksburg spans nearly 7,000 acres in both Cherokee and York counties near the South Carolina-North Carolina border. The park was established in the mid-1930s when the federal government gave more than 6,000 acres for use as a state park. The federal government acquired the land between 1935 and 1936 as part of the Resettlement Administration, a program which bought overdeveloped farmland from financially struggling families while helping them relocate to more economically viable places. Often the depleted farmland was rehabilitated as forests or other public spaces. 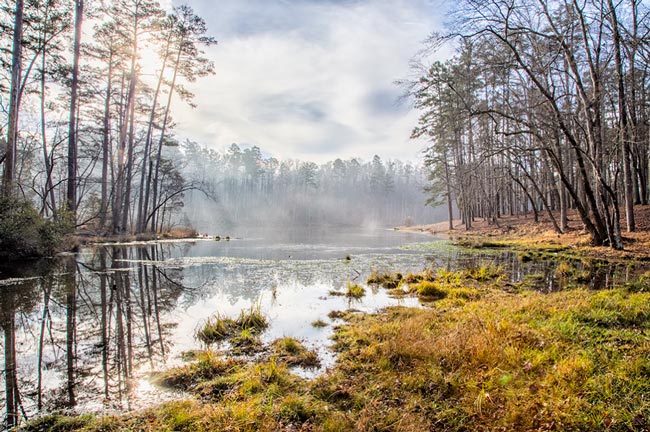 The government then donated the land to the state for use as a public park as one of two Recreational Demonstrations Areas (RDAs) in South Carolina (the other is Cheraw State Park). RDAs are parks created with the dormant farmland. The construction of Kings Mountain State Park was a project of the the Civilian Conservation Corps (CCC), a component of President Franklin Roosevelt’s New Deal. The CCC was a work-relief program that hired unemployed men to develop and conserve natural land. Kings Mountain State Park is one of 16 CCC-built state parks in South Carolina. 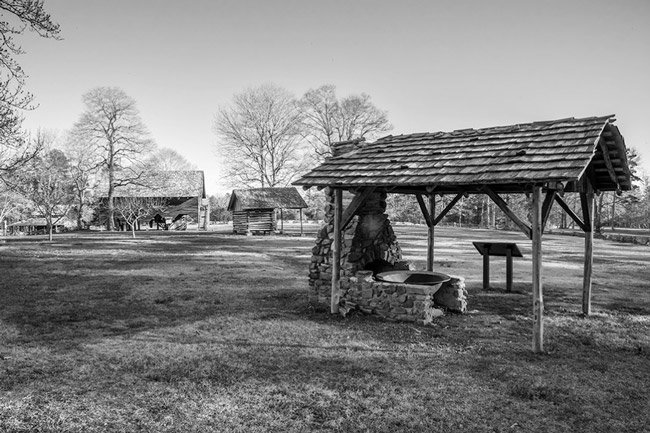 The state park abuts the Kings Mountain National Military Park, commemorating the Revolutionary War battle that took place there on October 7, 1780 known as the Battle of Kings Mountain. The military engagement was a victory for the Patriots, who defeated a Loyalist militia led by Major Patrick Ferguson. Major Ferguson was killed in the battle, inciting the Loyalists to surrender. The battle lasted little over an hour and was the first Patriot victory since the Siege of Charleston that May. It is important to note that while the state park and the military park are close neighbors, they are two separate entities.

Kings Mountain State Park acquired more land in 1995 when private donors contributed over 400 additional acres of surrounding land and another 332 were purchased for the park. Today the park includes two lakes – Lake Crawford and Lake York – a living history farm with historic structures, equestrian trails, hiking trails, and biking trails. The park is also home to Camp Cherokee and Camp York, built within the park in the 1930s. The initial goal of these two overnight camps was for “underprivileged children, farm clubs, and groups from the cities … to enjoy healthful outdoor life during the summer months at a low cost, under proper supervision.” 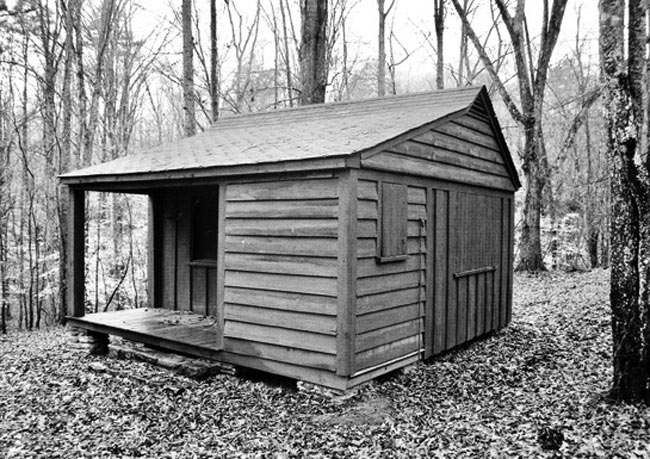 SC Department of Archives and History, 2005

Camp York is a rustic camp site of 35 cabins, a bath house, and a mess hall. Construction of the camp began in 1936, and it opened in 1938. The camp is arranged around the banks of 63-acre Lake York and is designated for group camping only, meaning that individuals may not rent a cabin. A Camp York cabin is pictured above. The CCC began building Camp Cherokee in 1938, which was completed in two years with facilities similar to those at Camp York. In 1945 the YMCA began using the camp, and today Camp Cherokee remains a YMCA-sponsored camp within the state park. 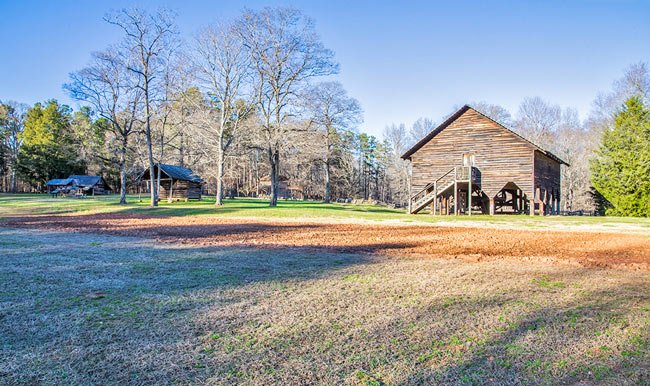 The photos directly above and below are of a cotton gin, one of several buildings seen here collected from area farms and relocated to the park in the 1970s to create a replica yeoman’s farm. In fact, all structures pictured on this page are from the living history farm except for the Camp York cabin. Visitors to the park may take self-guided tours or take a scheduled tour of the farm with a park ranger. 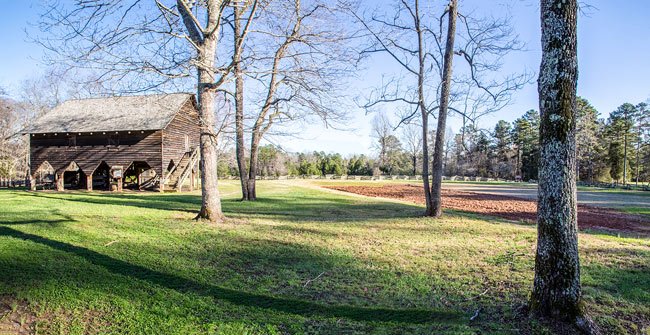 Demonstrations on blacksmithing, cotton ginning, and carpentry give visitors a glimpse into the lives of nineteenth-century farmers. Farm animals are also on hand in the park. Many of the people who farmed in this region are the descendants of those who fought at the Battle of Kings Mountain. 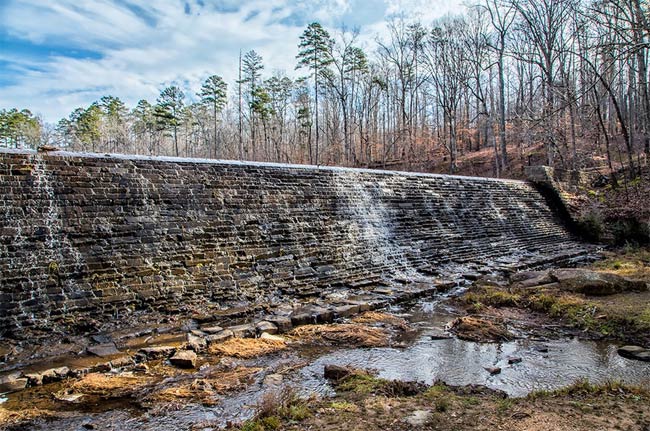 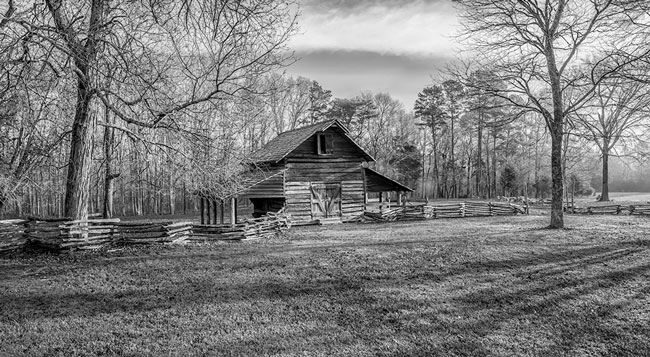 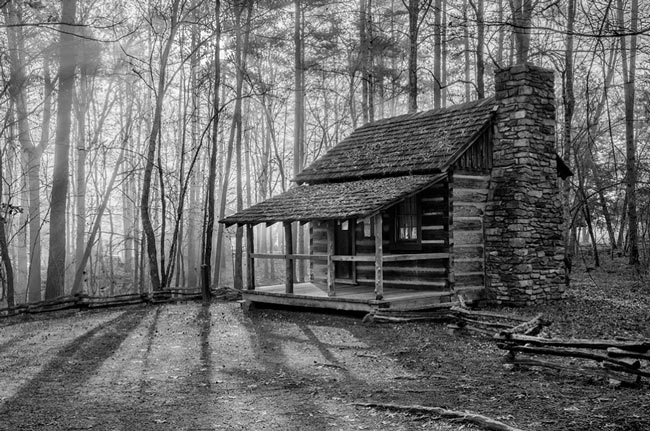 Kings Mountain State Park is listed in the National Register:

The Kings Mountain State Park Historic District is significant for its association with the Civilian Conservation Corps (CCC) and other New Deal conservation programs in South Carolina and the material legacy they left behind. Built by the CCC and local relief workers, Kings Mountain reflects the social and land reform efforts of the Roosevelt administration during the Great Depression. It is also significant as one of seventeen state parks developed in South Carolina during the 1930s, and one of two “Recreational Demonstration Areas” developed by the National Park Service (NPS) in the state. The district is representative of the rustic architecture and landscape design aesthetic of the NPS and the CCC, known as parkitecture. Parkitecture blends elements from rustic folk traditions with the Craftsman style. More than 90% of the 6,883-acre park is covered by forest. The park retains a majority of the layout designed by the CCC between 1936 and 1942. Historical resources at the park are varied and numerous. There are 78 contributing buildings, 10 contributing structures (including 2 CCC-era lakes and 4 roads), as well as one contributing archaeological resource. The majority of the contributing structures are located in association with two man-made lakes. These resources include cabins, a bathhouse, a picnic shelter, administrative buildings, recreational buildings, staff housing, bridges, dams and roads.