This 15-foot-tall boulder – affectionately called Storytelling Rock – stands on one of the oldest African American-owned farms in South Carolina. Sanders Farm in Filbert, a rural community between York and Clover, is known for its bounty of fruits and vegetables and is especially beloved for its peaches. The farm belongs to the family of author Dori Sanders, whose bestselling first novel, Clover, won the Lillian Smith Book Award in 1990. That novel was set in a peach orchard, similar to the Sanders Farm, which was purchased by Sanders’ father around 1915. He had previously worked as a sharecropper. 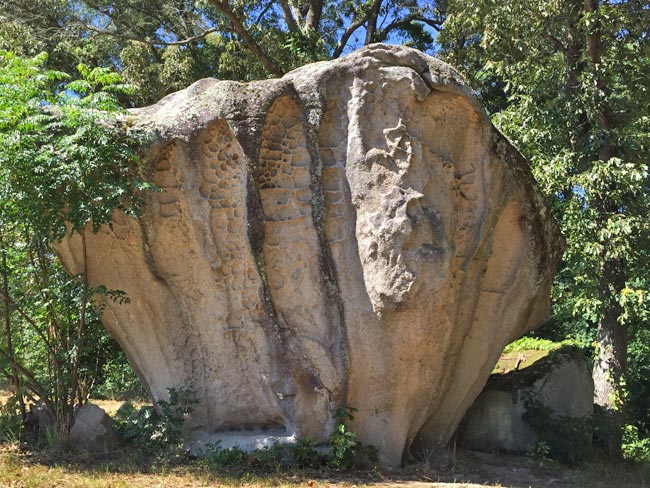 Rae Lovvorn of Fort Mill, 2015 © Do Not Use Without Written Consent

Today the novelist, who is in her eighties, still works on the family farm and tells stories to visitors beneath this ancient rock, shaped by the winds of time and reminiscent of the imposing formations found in Peachtree Rock Heritage Preserve. Those sandstone marvels are said to resemble peach trees, lending to the preserve’s name; it is apt that the similar Storytelling Rock stands surrounded by the preserve’s namesake fruit trees.

Storytelling Rock did not earn its name because of Sanders’ success as an author; rather, the rock helped the storyteller hone her gift, as she, her siblings, and their classmates spent their youths trading tales beneath its shadows. Today Sanders still welcomes people to her farm for the sunkissed state fruit as well as storytelling from one of South Carolina’s literary masters. The Sanders Farm is a regular stop on the annual Ag + Art Tour, which is described as “a free, self-guided tour of designated farms in South Carolina featuring local artisans and farmer’s markets.”