This ornate home in York is one of the most historically significant homes in the Upstate city. It was built around 1820 for Joseph Herndon; the Herndons were one of York’s founding families. The house originally was simple in appearance. In the 1850s a two-story facade was added to the home to give it more space. The distinguished piazzas with dormers on each end were added in 1860, along with additional octagonal rooms in the rear. The notable widow’s walk was added later. 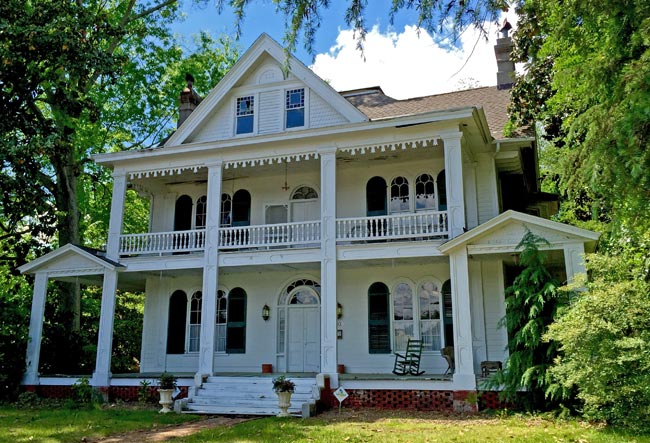 The changes and additions over the years resulted in an essentially new house built onto the front of original house. Following the Civil War while Union troops were occupying York, General George Custer’s 7th Cavalry met in the Herndon home. Today the house is vacant; the present owner of the home lives in North Carolina.

The Herndon House is listed in the National Register as part of the York Historic District:

The York Historic District consists of approximately 180 contributing properties located in the significant downtown commercial and residential areas of the town of York. Although there are numerous structures from the early settlement of the town, the majority were constructed in the late 19th and early 20th centuries. Established as the county seat, York has continuously served as a political center for York County. In 1785, the South Carolina Legislature enacted the establishment of York County. A centrally located site called Fergus Crossroads was chosen to be the county seat and became known as Yorkville. The name was shortened to York in 1915. The town incorporated in 1841. At the eve of the Civil War, York had the second highest per capita income in the state and considered itself to be “the Charleston of the Upcountry.” During Reconstruction, York became a major center for Ku Klux Klan activities, and as a result, Federal troops were stationed in the town. The early 1890s saw the beginning of the growth of the textile industry in York and the presence of Cannon Mills and Spring Mills had a large effect of the town’s growing economic prosperity. Today, the York Historic District’s visual appearance is primarily that of a nineteenth and early twentieth century town. The District includes commercial, residential, religious, and industrial structures. Reflective of the different eras of the town’s development, these structures show a diversity of architectural forms, including Greek Revival, Gothic Revival, Italianate, Classical Revival, Victorian, Commercial, and Bungalow.