Like the Sand Hills State Forest that sits adjacent to this land, the Carolina Sandhills National Wildlife Refuge was established in the 1930s as a project of the federal government’s Resettlement Administration. The program purchased land from willing sellers and attempted to restore the ravaged property that had been either over-harvested or cleared for farmland. The sandy soil in this region prohibited successful farming with few exceptions, leaving most settlers to rely on harvesting pines for commerce. Once the trees were cleared, the remaining land held no agricultural value and harbored few plant and wildlife populations. 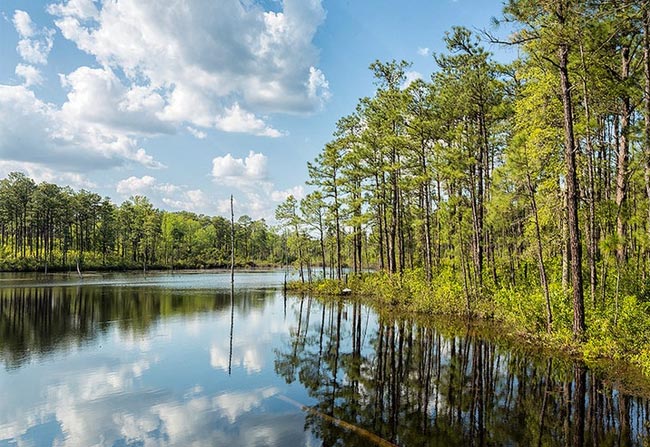 The refuge was established on March 17, 1939 and consists of 47,850 acres of land, primarily in Chesterfield County. A small tract of 210 acres lies within Marlboro County. The total acreage includes 2,502 acres held in conservation easements. Since then, the goal of the refuge has been to restore and manage the natural communities that thrived here, particularly the longleaf pine/wiregrass ecosystem, prior to the land’s degradation. 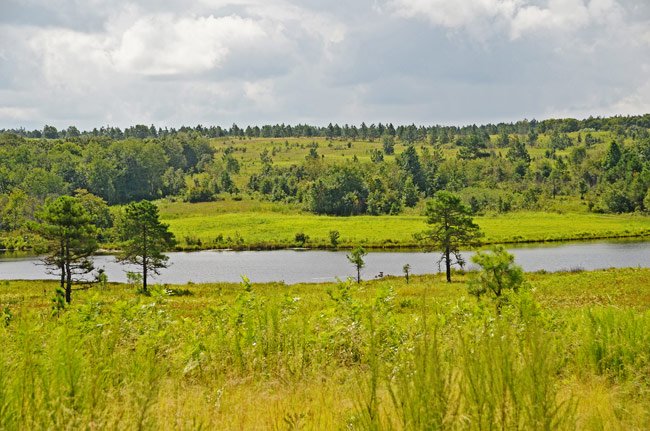 In addition to these longleaf pine forests, the refuge also includes a variety of other natural communities such as herbaceous seepages and streamhead pocosins. In particular, the refuge has focused on restoring stands of longleaf pine (Pinus palustris), seen below. The trees were cleared for the timber industry, leaving species of fauna that depend on longleaf pines, such as the red cockaded woodpecker (Picoides borealis), without habitat. 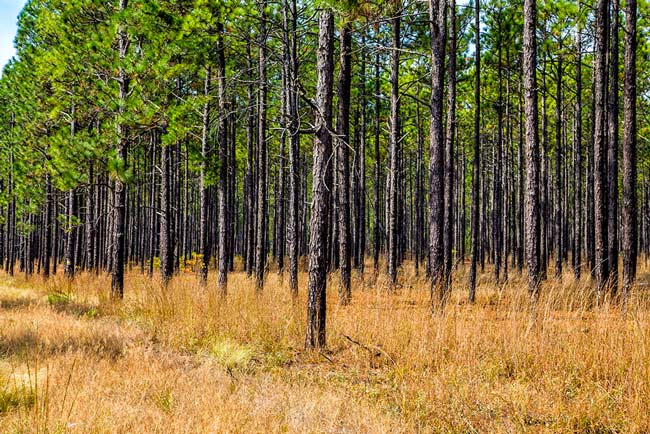 Jim Dollar of Indian Land, 2013 © Do Not Use Without Written Consent

The red cockaded woodpecker – a federally endangered species since 1970 – relies on the old age of longleaf pines, which have lifespans of several centuries, in order to excavate cavities. They also use the resin to protect their nests from predators and can safely live and breed within the pines, which are fire tolerant, during natural or prescribed burns. 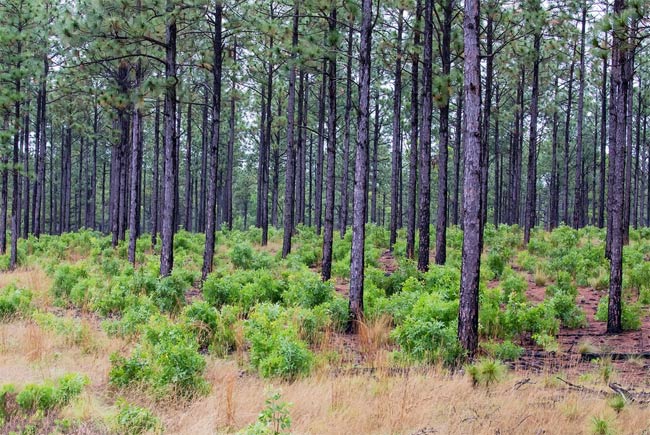 The clearing of longleaf pines is not unique to South Carolina; the tree once covered 90 million acres across the southeastern United States. Now around two million longleaf pine trees grow within their original range, which extends from Virginia to Florida and as far west as Texas. Longleaf pines are also a fire-dependent species, meaning that stands need regular burning every two to four years to prevent hardwood stands from developing and to eliminate ground litter buildup so that seeds can germinate. Fire suppression also contributed to the reduction of longleaf pine stands. 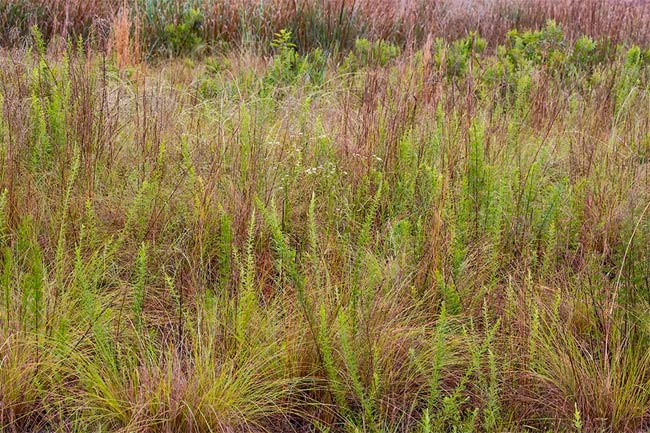 Wiregrass (Aristida stricta), seen above, is the dominant understory vegetation of longleaf pine stands within the Carolina Sandhills NWR. The grass also provides the fuel needed for successful burns within a longleaf pine forest and is therefore an essential feature of the restoration process. During a natural or prescribed burn, low-lying grasses spread fire across the understory, successfully clearing ground litter and preventing fires from reaching damaging heights. The regular burning of the natural fuel beneath the pines, including longleaf needles, also prevents it from accumulating and creating more intense and damaging fires. Prescribed burns date to prehistoric times when Native Americans practiced burning to clear land for hunts, to prevent wildfires, and to encourage growth of other native plants. When European settlers arrived and began taking over the lands formerly managed by Native Americans, fire management declined significantly. As a result, hardwood forests gradually grew in place of longleaf pine forests, creating wildfire opportunities. 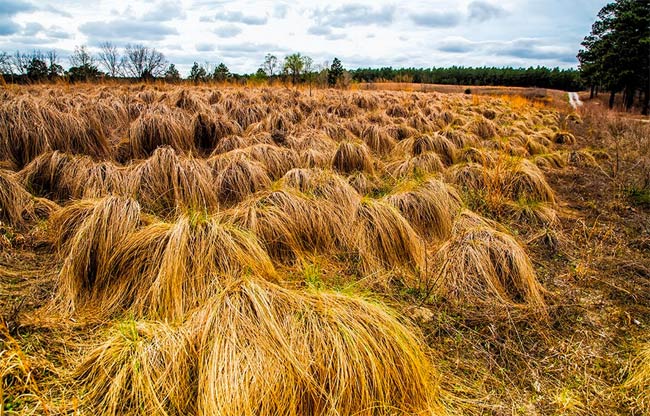 Eventually, European settlers who had depended on burning for open herding in their former homelands, along with African slaves, renewed burning management in the United States. However, the practice of official fire suppression began in the early twentieth century following devastating wildfires that raged through the canopies of fire-intolerant trees within overgrown forests. The United States Forest Service established an aggressive anti-fire campaign to prevent fires along with fire-suppressive policies, mistakenly believing that all fires were damaging to their surroundings. Gradually, the US Forest Service began to understand the benefits of frequent burning, though by then the damage had been done to countless stands of longleaf pines. Now, restoring these stands is a mission of all forest management programs, which include regular burns. Above, grasses undergo restoration in 2014. 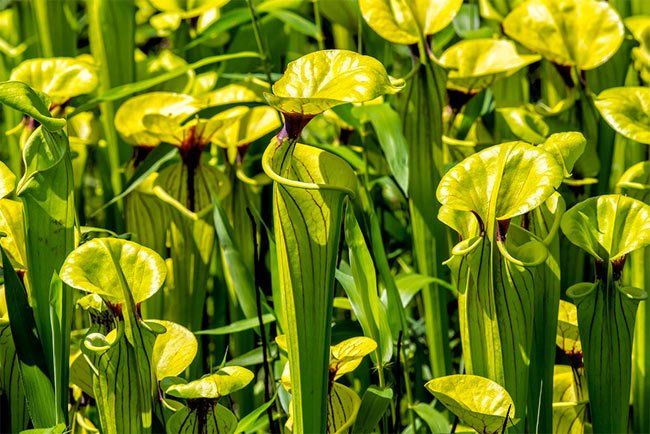 The longleaf pine forests are the dominant community within the Carolina Sandhills NWR, but certainly not the only one. Regular burns lead to other natural communities, such as herbaceous seepages, which establish near streamheads in areas that undergo frequent burns. Above, yellow trumpet pitcher plants (Sarracenia flava) grow in these seepages along with two other varieties of pitcher plants and an abundance of colorful wildflowers, seen below. The absence of regular fires allows trees and shrubs to occur, leading to the occurrence of streamhead pocosins, or evergreen shrub bogs. These communities are also found within the Carolina Sandhills NWR, which hosts the white wicky (Kalmia cuneata), a federal species of concern. The only populations of white wicky accessible to the public are within the Carolina Sandhills NWR.

Efforts to restore the Carolina Sandhills NWR have resulted in the rebounding of plant and animal diversity within the refuge. The property now boasts 190 species of birds, 42 species of mammals, 41 species of reptiles, and 25 species of amphibians. Thirty man-made lakes and ponds dot the landscape, created to manage water birds. Two walking trails allow visitors to explore the natural communities of the refuge. Hunting and fishing are permitted within the refuge, provided appropriate licensing and guidelines are followed. Also featured within the refuge is a cross-shaped cleared field where the United States Army practiced bombing during World War II, though with bags of flour rather than gunpowder. Today the field is a dove-hunting site. 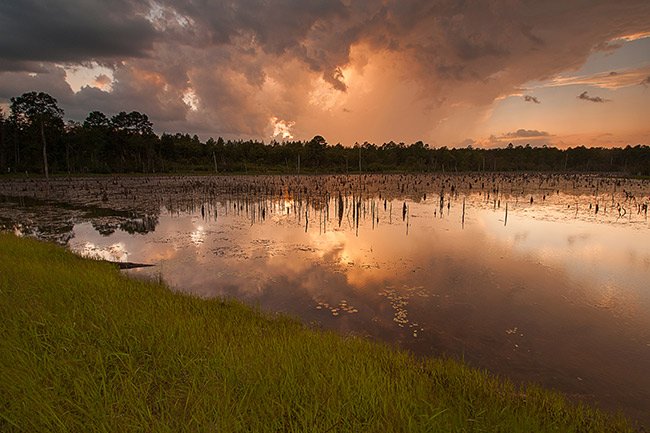 Derek Thornton of Greer, 2007 © Do Not Use Without Written Consent