Known for its 18-hole championship golf course as well as its 360-acre Lake Juniper, Cheraw State Park has something to offer all lovers of the outdoors. Like many South Carolina state parks, it was developed in the 1930s by the Civilian Conservation Corps (CCC), a work relief program established in 1933 by President Franklin Roosevelt as part of the New Deal.

In fact, in 1934 Cheraw State Park became the first state park proposed for the Palmetto State, although in 1936, Myrtle Beach State Park became the first to actually open. The park is also one of two Recreational Demonstrations Areas (RDAs) in South Carolina (the other is Kings Mountain State Park). RDAs are parks created from overused, barren farmland purchased by the government during the Resettlement Administration in the 1930s.

According to local lore, children from Cheraw collected pennies for the development of the park, and the community contributed heavily towards the donations. As a result, the Town of Cheraw was able to purchase 700 acres for the park. By 1934, another 7,362 acres had been donated by local citizens and the federal government. The park sits near the Carolina Sandhills National Wildlife Refuge as well as the Sand Hills State Forest; all three sites are abundant in longleaf pines (Pinus palustris), which provide habitat to the federally-endangered red-cockaded woodpecker (Picoides borealis).

The highlight of the park is Lake Juniper, one of the park’s first CCC projects. Though it is closed for swimming during the winter, other water activities are available, including boating and fishing with a license. Canoes and kayaks can be rented for the day at the park, and private gasoline-powered boats up to 10 horsepower are permitted. Those paddling across the 2.5-mile lake and back can expect to be on the water for three or four hours. A Moonlight Canoe Float is hosted by the park once a month from March through October.

Within the park, Lake Juniper offers impressive wildlife viewing opportunities. A five-mile equestrian trail and camping facility are available for horse-lovers, and the four-and-a-half mile Turkey Oak Trail allows hikers to explore the park’s natural beauty, as does a nine-mile bike trail. Both regular campsites and cabins can be rented for those who need more than a day at this beloved state park.

Jim Jenkins of Chesterfield contributed the photo below shares: “As a teenager, I spent many wonderful summer days at Cheraw State Park, swimming, camping, and picnicking. At that time it was a chore to get to the other side of Lake Juniper, but the attractive boardwalk that has been added makes it a pleasant way to see the lake, the dam, campsites, and even fish from the boardwalk. Many folks who have not visited the park in recent years are not even aware the boardwalk has been built. This is a wonderful addition to the park facilities.” 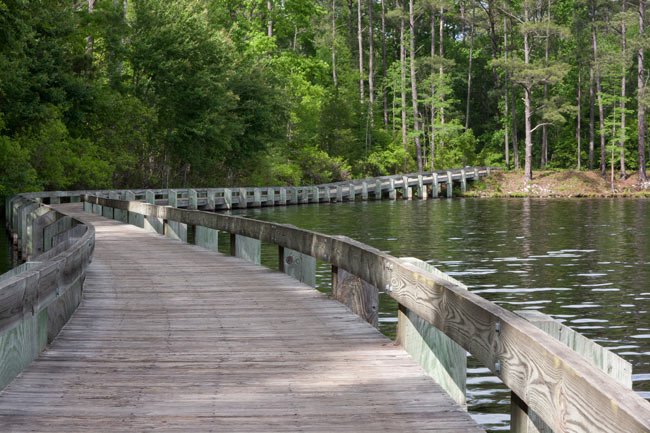 David Lurty, who contributed the photo below, writes: “I live in the Upstate but was visiting Cheraw and my friends took me to Lake Juniper. I was impressed with the boardwalk along the lake and thought this would be a good picture.”

David Lurtey, 2007 © Do Not Use Without Written Consent

Photographer Ronnie Hucks shares his comments on his photo: “I was able to quietly paddle reasonably close to this mother osprey guarding her nest in Lake Juniper. Took a few photographs, and quickly went on my way so as not to disturb.” 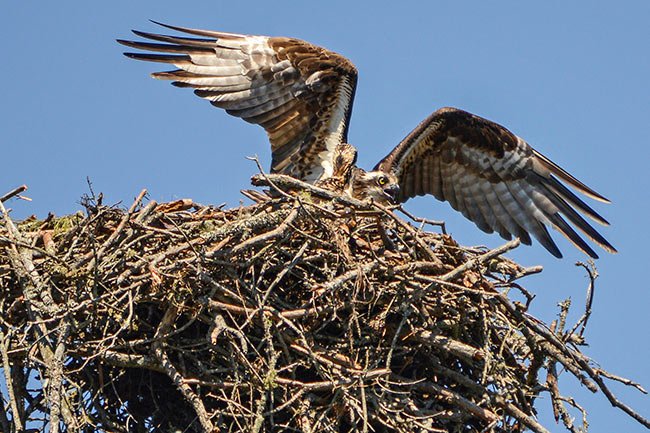 Ronnie Hucks of Florence, 2016 © Do Not Use Without Written Consent

SC Picture Project visitor Steve Bilby of Cheraw says that he and his family “often go kayaking on Lake Juniper, and especially love to slowly meander though the cypress trees at the head of the lake. The beauty and tranquility is unsurpassed as nature’s bounty overflows at every turn.”