Revolutionary War martyr Isaac Hayne inherited this property in Colleton County from his father, also named Isaac Hayne, in 1751. Hayne owned several other properties, including two other plantations and a town home in Charleston. Yet Hayne Hall, as the Jacksonboro rice plantation was called, was the permanent residence of Hayne, his wife, Elizabeth, and their seven children. 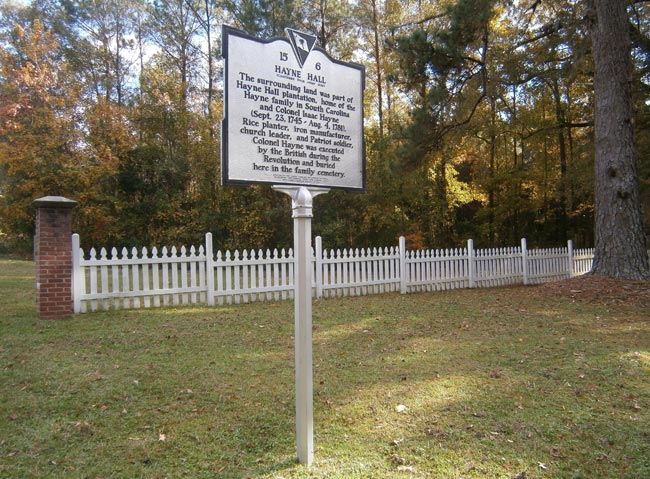 Hayne was quick to take up arms against the British at the onset of the American Revolution. When Charleston fell to the British in the siege of May, 1780, Hayne was captured and released on parole to Hayne Hall only after taking a pledge of neutrality. However, by the summer of 1781 the British demanded that all those paroled come to Charleston and take an oath of allegiance to the Crown. At this time Hayne’s wife and two of their children were suffering from smallpox. Hayne reluctantly agreed in order to avoid prison and to obtain medicine for his family. Despite his efforts, Elizabeth and the children succumbed to the disease. 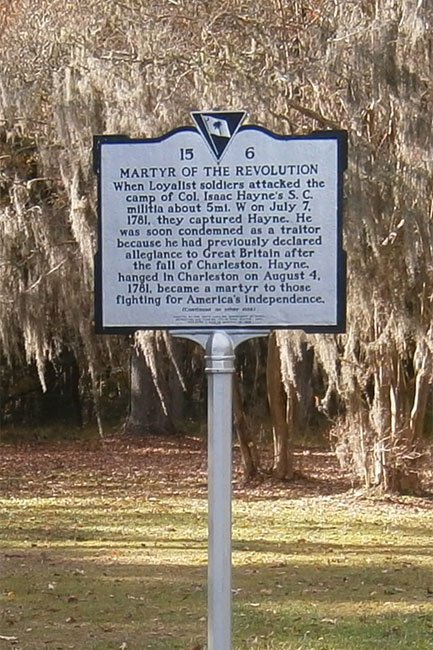 A Patriot at heart, Hayne did not adhere to his oath. When the British required that Hayne fight the Patriots, he refused and once again took up arms against the Crown. Hayne was commissioned as a colonel by the American militia and led a regiment to capture General Andrew Williamson, an American who became a Loyalist. Though his mission was successful, Hayne quickly was recaptured and imprisoned at the provost dungeon within the Charleston Exchange Building. On August 4, 1781, Colonel Isaac Hayne was hanged for treason at the command of Lord Rawdon, who wished to make an example of Hayne to other Patriots. However, by the following year the British had surrendered and evacuated South Carolina. 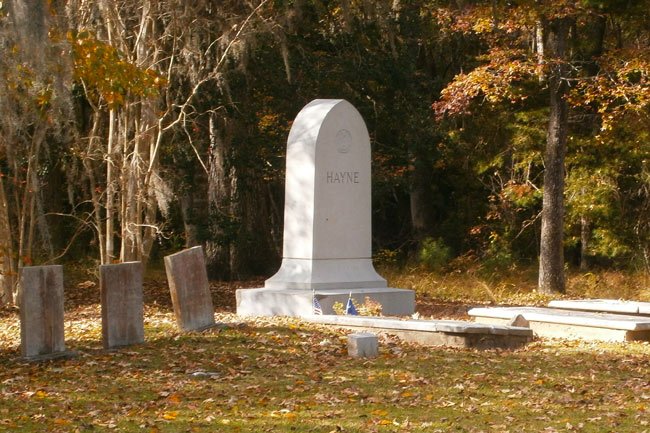 Colonel Hayne’s son, Isaac, retrieved his father’s body from Charleston and buried him at his home at Hayne Hall. Twelve grave sites occupy the family’s burial ground, which is now owned and maintained by the South Carolina State Park Service.

The inscription on the marker for Hayne Hall at the top of the page reads:

The surrounding land was part of Hayne Hall plantation, home of the Hayne family in South Carolina and Colonel Isaac Hayne (September 23, 1745 – August 4, 1781). Rice planter, iron manufacturer, church leader, and Patriot soldier, Colonel Hayne was executed by the British during the Revolution and buried here in the family cemetery.