Embedded in the Timmonsville grave site of a Revolutionary War veteran is not just an artifact from that war but also a mystery. Buried here is Augustin Wilson, who fought for the Patriots during the American Revolution. Originally from Virginia, Wilson lived in North Carolina at the time of the war and served alongside North Carolina troops in South Carolina; he also served as an Ensign at the 1779 Battle of Brier Creek, Georgia. Following the war, Wilson relocated to Sumter District (now Sumter County) to start a family. He later moved to Darlington County, where he owned a plantation. 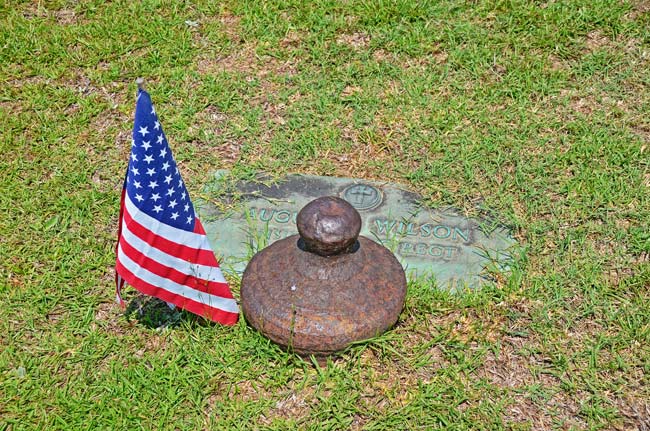 Wilson died in 1847 or 1848 (his grave marker says 1847 while an historical marker erected in his honor claims 1848) and is interred within the Lake Swamp Baptist Church graveyard. A simple marker denotes the place of his burial, and interestingly, so does a visible portion of a cannon barrel. The cannon is said to have been used in the Revolutionary War and also in the War of 1812. During the latter war, the cannon was operated by General David Rogerson Williams, who later served as governor of South Carolina from 1814 through 1816. 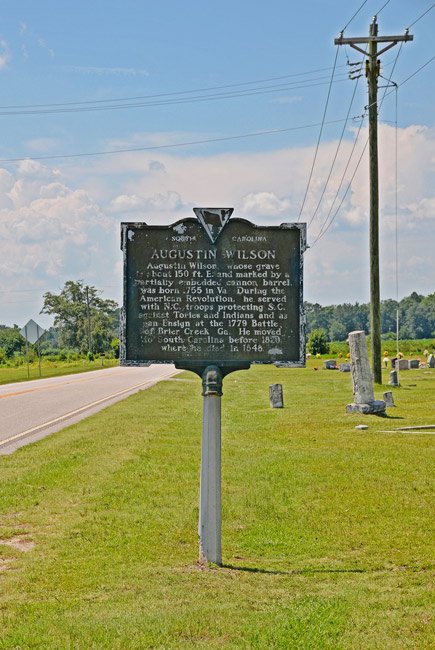 Local legend claims that at some point the cannon was brought to the area as part of a Fourth of July celebration. Following the patriotic fete, the cannon was left sitting beside an older Lake Swamp Baptist Church building; at the time, a newer church building was in the construction process. When workers building the new sanctuary returned from a short break, they discovered the cannon buried at the grave site of Augustin Wilson. How the massive artillery got there is perplexing. The men who made the strange discovery stated that merely moving the cannon would take the strength of several people, leaving some to believe that spirits placed the cannon in the earth by Wilson’s marker. With no formal explanation offered, no one officially knows who chose to honor Wilson’s military service with the relic.

Many thanks to Linda Brown of the photos and information on this page.