Coker University in Hartsville began in 1894 as Welsh Neck High School. The Darlington County area was settled in 1736 by Welsh Baptists who had traveled to South Carolina from Pennsylvania and Delaware. Though their community, Welsh Neck, is now extinct, remnants of the settlement, such as Welsh Neck Baptist Church, still stand. The school was called Coker College for over a century; it became accredited as a university in 2019. 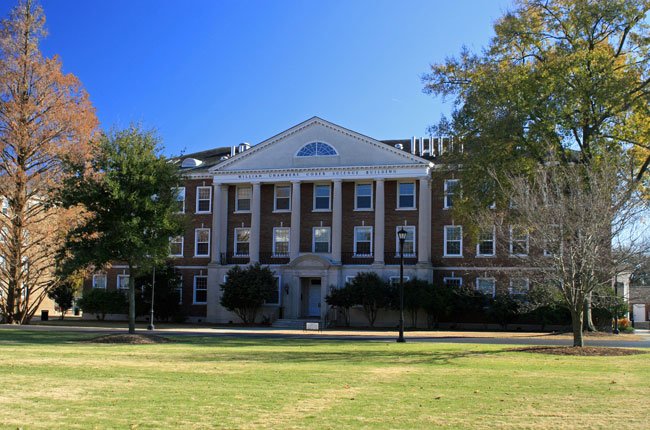 Welsh Neck High School was formed by the local Welsh Neck Baptist Association at the behest of Harstville businessman Major James Lide Coker. With the advent of the statewide public school system in 1908, the high school was no longer needed. The Board of Trustees converted the school to a private Baptist four-year college, Coker College for Women.

Coker remained a single-gender college until men were admitted in 1969. Today the liberal arts university continues as a private school, though it dropped its Baptist affiliation in 1944. Until 2003 the campus also served as the home of the South Carolina Governor’s School for Science and Mathematics, a public residential school for South Carolina students who exhibit talent in science and math.

The William Chambers Coker Science Building, pictured above, was built in 1951 and is named for Major Coker’s last living son. Dr. William Coker was a renowned botanist with an established academic career in the sciences at the University of North Carolina at Chapel Hill. He published a book about the vegetation that grows in Hartsville, including mountain laurel (Kalmia latifolia), called The Plant Life and purchased the Thomas E. Hart House and its surrounding property – Kalmia Gardens – for his sister-in-law, May Roper Coker, in 1932. May Roper Coker donated the house and gardens to the college (now university) in 1965.