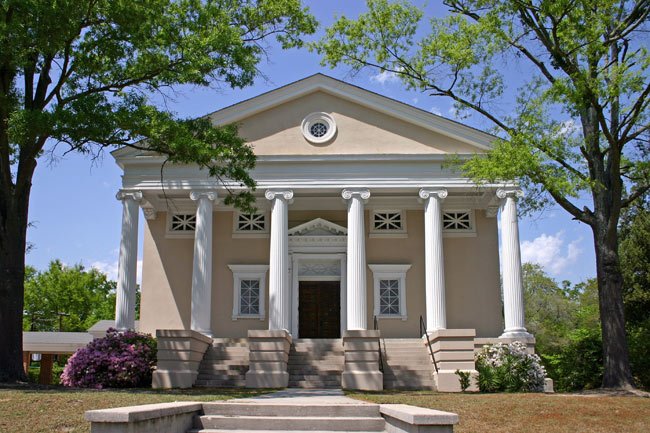 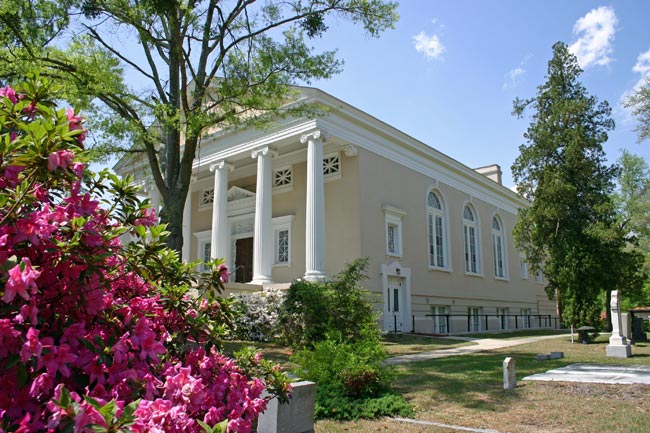 In 1853 the South Carolina General Assembly granted Hartsville Baptist its official charter. By 1906 the church had grown significantly, and the church changed its name to First Baptist. This stucco building was constructed in 1908 by noted architect and Hartsville native Charles Coker Wilson, who also completed the South Carolina State House in 1907. In 1909 Dr. E.V. Baldy, Coker College’s first president, was serving as pastor. The church continued to grow through the decades, and in 1964 a brick church (not shown) was built in front of the stucco church, and that is where First Baptist parishioners worship today.

The First Baptist Church of Hartsville is listed in the National Register as part of the East Home District:

Detailed History of the First Baptist Church of Hartsville

Below is an article that was contributed to the South Carolina Picture Project by Bill Segars of Hartsville. It originally appeared in his local paper, The Darlington New & Press. It was published in April of 2015.

As soon as the town of Hartsville began to form, so did a Baptist church. Early in 1850 John Lide Hart bought 491 acres of land from his brother-in-law, Thomas Lide, which was previously owned by his father, Thomas Hart. John Hart was very active in the Baptist denomination at Gum Branch Baptist Church and Providence Baptist Church; one of his first good deeds, upon purchasing this land, was to donate some of it for the purpose of building a Baptist church.

On November 16, 1850, Hartsville Baptist Church, the first church in the soon-to-be community of Hartsville, was formed. The first structure was built to serve the citizens in 1851 with the Reverend J.W. Burn as pastor. He served until his death in 1880. Dr. W.S. Dorset came to Hartsville in 1903 as the pastor of Hartsville Baptist and served here until 1907. It was during this period that the Reverend Dorset encouraged the congregation to change its name to First Baptist Church and to look to future growth with a new building.

When Dr. E.V. Baldy of Georgia, the next pastor, arrived in 1907, he found a growing community and a building under construction, including a wall about three feet high. But there was a small problem; the congregation had committed to an enormous debt in order to build this solid masonry building: $27,000. In 1907, this was an unheard-of amount of money for a church building measuring 52-feet-wide by 85-feet-deep in such a small community. So Dr. Baldy’s first task was to set out to raise the funds and support in order to pay for this building, which he did with ease and very little problem. Dr. Baldy stayed in Hartsville for sixteen years, serving his community and acting as pastor of First Baptist Church.

On a Sunday in February 1908, possibly the 23rd, it seemed like all of Hartsville gathered for the opening service of the new edifice that sits on top of the hill overlooking the town. No one was more proud of the new elegant Greek Revival building than Mrs. Jane Lide Coker Wilson, because her son, Charles Coker Wilson, was the architect of her hometown church building. Charles Coker Wilson had recently returned to Columbia, South Carolina to practice architecture. When his mother insisted that he return to Hartsville – his birthplace – to design her church, he could not turn her down.

Charles Coker Wilson, while practicing in South Carolina, proved to be a very prolific architect of many well-known buildings that are presently listed in the National Register of Historic Places in South Carolina. Buildings that can be seen today, from the South Carolina State Capitol, to many local residences and most of the buildings on Coker College campus, are only a sample of Wilson’s additions to South Carolina’s architectural landscape. Wilson not only designed buildings from the coast to the upstate of South Carolina, he trained many young start-up architects to follow his lead with stately, imposing, quality buildings – buildings that would stand the test of time as First Baptist Church has.

The many generations of Hartsvillians who have attended First Baptist Church have been good stewards of their buildings and property. As the congregation grew, a new larger sanctuary was built in 1964, but the old 1908 building was not forgotten. As with most church congregations, conversations and even debates have been held as to what to do with their aging buildings. Yet historically-minded members have prevailed, and the heritage-rich buildings have been saved on this campus for others to enjoy. In 2003 Wilson’s old sanctuary was completely renovated and is presently used as a chapel on a regular basis for the glory of God.