The J.B. Gilbert House in Hartsville is representative of early twentieth century industrialism in Darlington County. The home was built in 1929 by Alabama businessman John Barton Gilbert, who was recruited to Hartsville by Charles Coker to work for his business, Southern Novelty Company, later called Sonoco. Gilbert worked his way up the company, first as a salesman and finally as corporate treasurer. He also helped found the Cornish Company in 1922 and established the Joy Silk Mill in 1936, which manufactured nylon products. 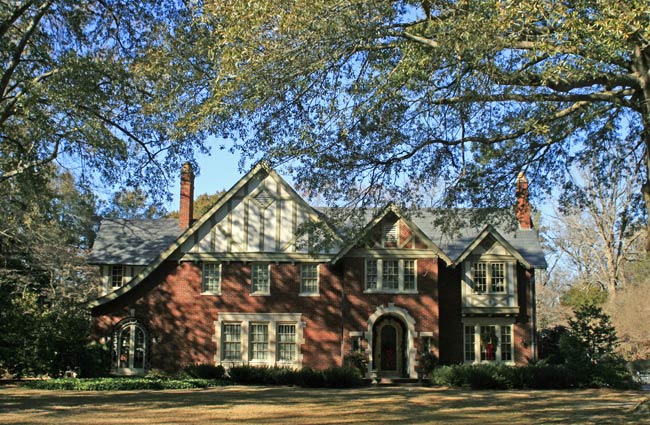 The Tudor Revival home was designed by Swedish architect J. Carroll Johnson, who came to Columbia in 1910. Johnson quickly rose to prominence in the capitol city and around the state, designing structures throughout South Carolina. Johnson was best known as the architect for the University of South Carolina from 1922 until 1956. 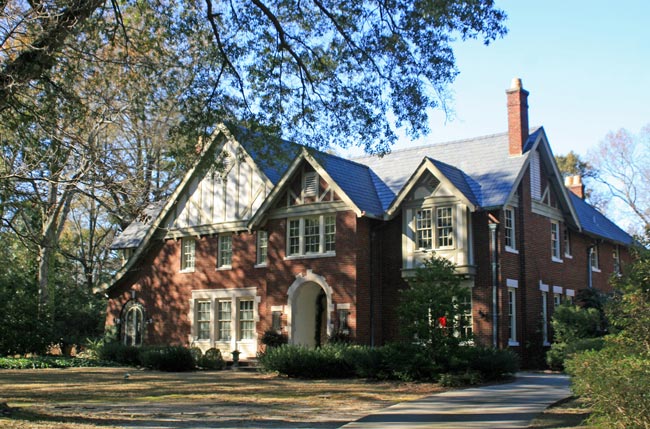 The J.B. Gilbert House is listed in the National Register:

The J.B. Gilbert House is significant as an excellent example of an early twentieth century Tudor Revival residence; as a design of J. Carroll Johnson, a prominent Columbia architect of the twentieth century; and for its association with John Barton Gilbert (1891-1953), a prominent Hartsville manufacturer and businessman. The house was built in 1929 by Gilbert, who came to Hartsville in 1919 from Alabama, where he had been a buyer from Avondale Mills. He was brought to Hartsville by Charles W. Coker, president of the Southern Novelty Company, later Sonoco Products Company. Gilbert served Sonoco first as a salesman, then an accountant, and finally as corporate treasurer. In addition to his work for Sonoco, Gilbert helped establish the Cornish Company in 1922.

The house is a two-story brick residence with an irregular plan and asymmetrical façade. It has a cross gable slate roof with two additional lower cross gables. Tall interior chimneys have decorative chimney pots. The red brick cladding is highlighted with limestone trim, decorative ironwork, half timbering, and herringbone brickwork in the gables. An integral garage is located at the right rear elevation.