This antebellum home was built around 1840 in the former Springville community of Darlington. Springville was established in 1820 as a summer retreat for planters who worked the lower lands of the Pee Dee River. The land encompassing Springville was higher and its soil more porous, allowing those who sought refuge here to escape the heat and mosquitoes of summer. Mosquitoes can cause malaria, and they are less prevalent at higher altitudes where standing water is not a concern. The area also abounded with fresh mineral springs. 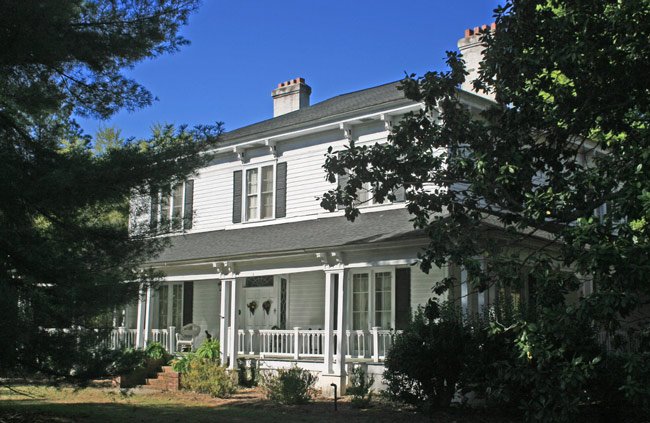 John Westfield Lide, son of Major Robert Lide and Mary Westfield Holloway Lide, belonged to the third graduating class of South Carolina College, now the University of South Carolina, finishing in 1809. After graduation, he moved back to Darlington District (now Darlington County). He became a successful planter and represented his district in the South Carlina House of Representatives from 1822 through 1825. 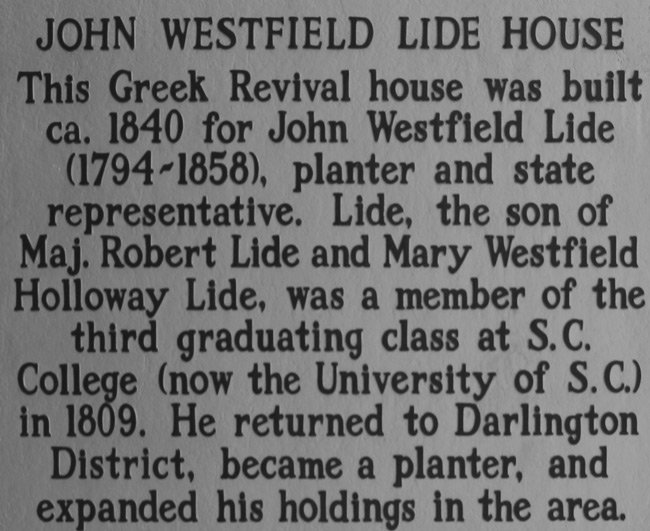 By 1840 Lide had moved to Springville and built this Greek Revival home. Though Springville never incorporated, summer residents began to make the community their permanent residence around this time. Incomes still derived largely from plantations, however, and following the loss of slave labor in 1865, planters were forced to seek new ways to secure their livelihoods. As a result, Springville was deserted soon after the close of the Civil War. Today the extinct retreat village is part of Darlington. 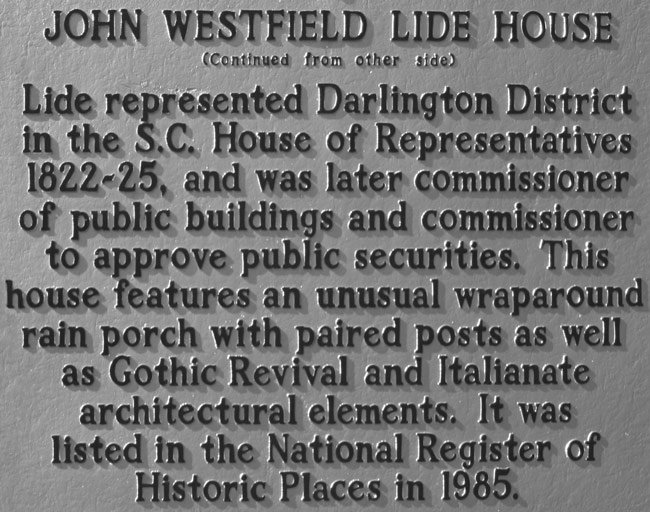 The John Westfield Lide House is listed in the National Register,:

The John W. Lide House is significant as one of the six remaining intact residences of the once-active nineteenth century pineland community of Springville. Believed to have been built ca. 1830-1840, this house reflects the architectural heritage and social history of southern antebellum society and is a major element of the Springville planter community. John W. Lide was one of the wealthiest and most influential men in Darlington County in the mid-twentieth century. He was also a two-term member of the state House of Representatives, serving from 1822-25.

The John W. Lide House is a two-story, rectangular, central-hall, four-over-four plan, frame residence with a low-pitched hip roof. The house has two massive, stuccoed brick, interior chimneys. Exterior sheathing is of weatherboard and the foundation is brick piers with brick fill. A full-width, one-story, hip roof porch extends across the entire façade and wraps both side elevations culminating in small rooms on the southeast and southwest corners. The porch roof is supported by paired, square, pine posts resting on freestanding, stuccoed brick piers and features sawn brackets corresponding with the posts supporting the boxed overhanging eave. The property contains one antebellum outbuilding, a rectangular, one-story, braced-frame building with a gable roof, weatherboard siding, and hewn sills.