This 25-acre lake in the Society Hill vicinity was created on land owned in the 1930s by Fuller Jackson. Jackson sold his nearly 68 acres of land in 1941, and the property changed hands a few more times in the following years. Eventually, the United States Army Corps of Engineers constructed a lake and surrounding park on the acreage. The property was maintained by the Darlington Police Association, giving the lake its name, “Darpo.” By the end of the 1970s the lake and park were being managed by Darlington County. 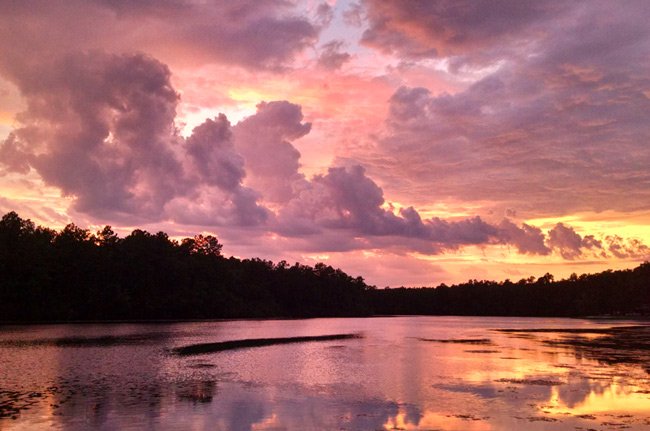 Ken McRae of Dovesville, 2015 © Do Not Use Without Written Consent

Over the 1980s and early 1990s, the park and lake fell into disrepair due to lack of public interest. Yet in the late 1990s the property experienced a resurgence when Fuller Jackson’s grandson, Ken McRae, became director of the Darlington County Recreation Department. McRae’s goal was to restore the lake and its surrounding grounds to the county’s original vision. Buildings such as shelters and a clubhouse, all added to the property in the 1960s and 1970s, were renovated and modernized. The lake itself was restored following a dredging project that eliminated invasive aquatic plants and also after it was stocked with carp to help maintain vegetation. Landscaping projects beautified the area, and a floating dock and handicap-accessible fishing pier were added to the lake.

Such improvements have made Lake Darpo a destination for lovers of the outdoors. Complete with an RV campsite, picnic shelters, pedal boats, and plenty of fishing spots, Lake Darpo is a family-friendly weekend destination or the perfect place to while away a Saturday afternoon. The revitalized clubhouse has even become a popular event site for weddings, reunions, and other gatherings. Though this renewed recreation site has been noticeably upgraded, changes are still on the horizon. Future plans include more improvements to the grounds and the addition of rental cabins encompassing the lake.