This Beaux Arts-style residence in Society Hill, called Japonica Hall for the Camellia japonica planted on its grounds by owner Major James Jonathan Lucas, was completed in 1897. The house replaced an earlier structure on or near the same site that had been the home of Dr. Thomas Smith. That home burned in 1892. 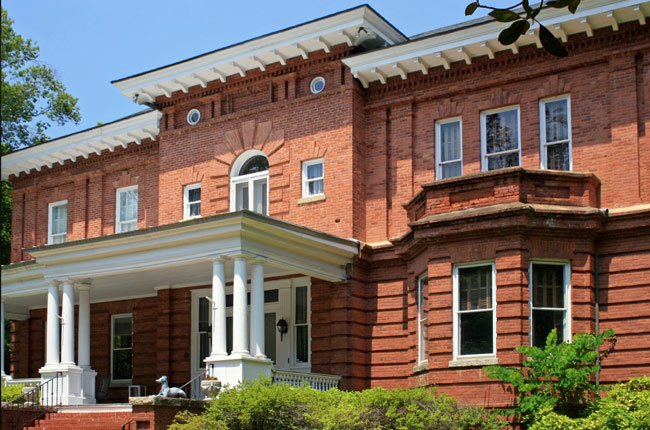 Major Lucas, a graduate of The Citadel and an artillery officer in the Civil War, served in the South Carolina House of Representatives from 1856 through 1862, representing Charleston. In 1861 Lucas married a woman from Society Hill, Caroline Eliza McIver, and they moved to his wife’s hometown in 1865. 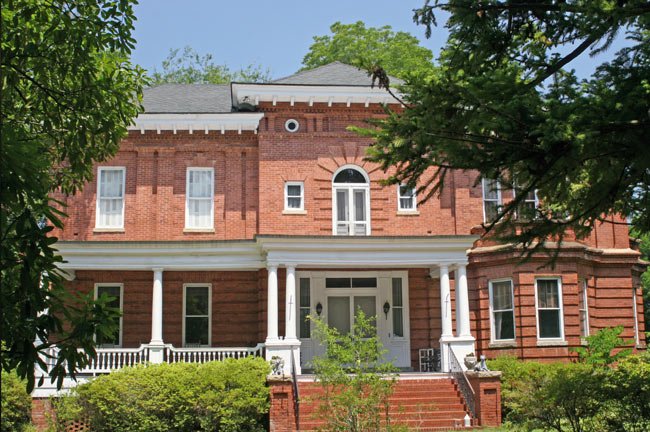 The Lucases hired noted architect Charles Coker Wilson of Hartsville – responsible for the South Carolina Statehouse – and his partner, William Augustus Edwards of Darlington, to design their two-and-a-half story manse. In fact, Japonica Hall is one of Wilson’s earliest extant designs in the South Carolina and may be his earliest residential design in the state. 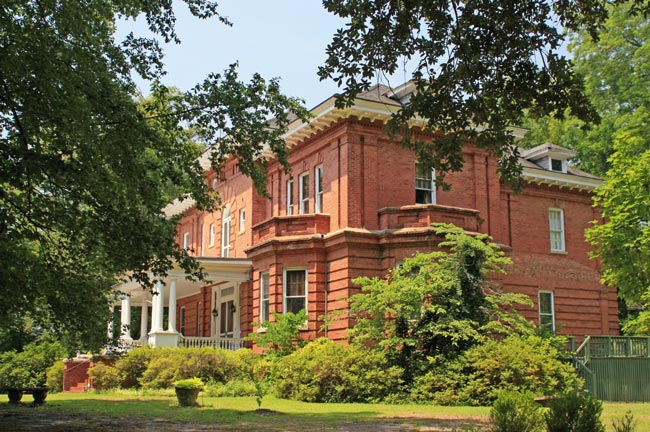 Lucas achieved success as director of the Atlantic Coastline Railroad Company when it was established in 1898 as well as the Cheraw and Darlington Railroad. Lucas, am amateur horticulturalist, belonged to the Darlington County Agricultural Society, which met at a mineral spring in the neighboring town of Darlington. Lucas’s interest in agriculture was evident in the plantings on his home estate as well as his local vineyards and winery. 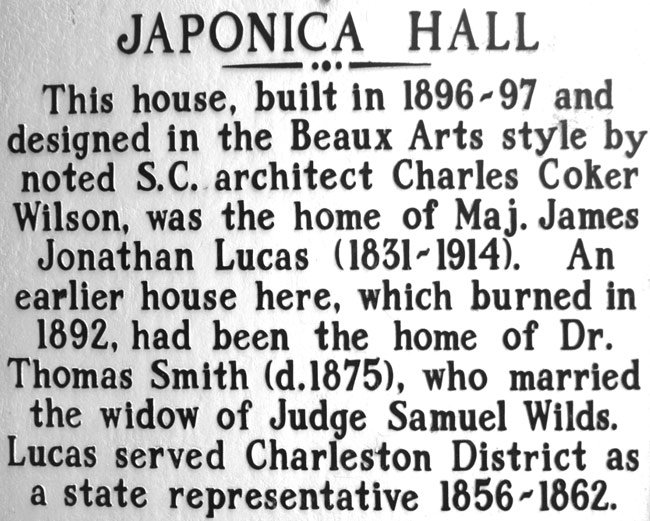 Japonica Hall later became the residence of Lucas’s son, Captain Thomas Smith Lucas, who owned it until his death in 1939. 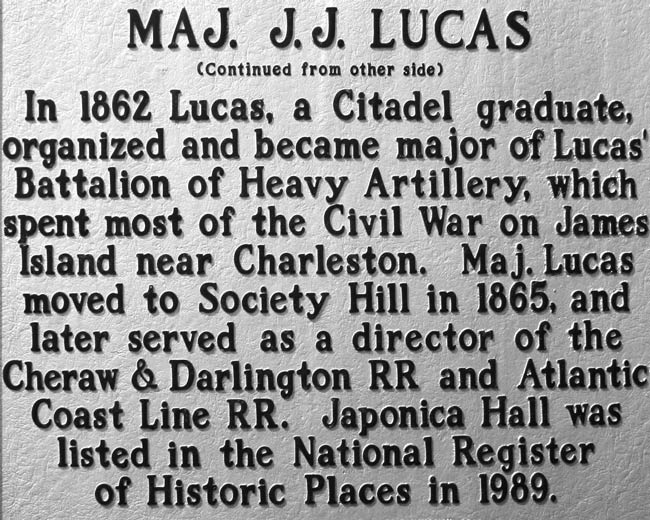 Japonica Hall is listed in the National Register:

(Maj. J.J. Lucas House) Japonica Hall was built in 1896-97 for Major James Jonathan Lucas, a prominent local railroad builder and businessman. Lucas, who represented Charleston in the state House of Representatives from 1856-1862, and was a prominent Confederate artillery officer in the defense of Charleston during the Civil War, settled in Society Hill in 1865. This two-and-one-half story over basement brick residence is significant architecturally as an important early residential design of Charles Coker Wilson and William Augustus Edwards, noted South Carolina architects. Its primary significance, however, is as an academic expression of turn-of-the-century Beaux Arts or eclectic classicism.

Reminiscent of Italian Renaissance palazzos, Japonica Hall features a rusticated first story and a second story emulating a piano nobile with paired pilasters demarking the bays on the second story. The first and second stories are separated by a molded brick band. The cornice is composed of overhanging molding supported by modillions above a denticulated brick course. The projecting hipped-roof central entrance bay has a double door entry with flanking fluted pilasters, sidelights and transom-lights on the first floor, and double glass paneled doors with semi-circular transom-light, a rusticated surround and small flanking windows on the upper floor. A one-story Tuscan veranda is accessed by a wide stair. The four chimneys have corbeled stacks and the hipped roof features finials at the termination of roof ridges.

The following article was contributed by Brian Gandy, director of the Darlington County Historical Commission. It appeared in the Darlington News & Press on Tuesday, November 29, 2016.

When I heard that Richard (Dick) Baird, great-great grandson of Governor David R. Williams, had passed away, I immediately thought of his historic home, Japonica Hall. When one thinks of the word japonica, beautiful winter blooming camellias to come to mind. It is after the Camellia japonica that Japonica Hall in Society Hill, South Carolina, is named. It has been the home of Dick and Michal Baird for the last 37 years.

The property was originally owned by Dr. Thomas Smith and later by Major James Jonathan Lucas, a relative of Dick Baird’s through marriage to Dick’s grandmother’s aunt, Caroline Eliza McIver. Major Lucas had been born in Kershaw County but had migrated to Charleston. He graduated from The Citadel, the Military College of South Carolina, in 1851, and, one year later, established a mercantile business that was successful through the beginning of the War between the States. During the war, Lucas served as a prominent Confederate artillery officer in the defense of Charleston.

Major Lucas was politically active, serving in the South Carolina House of Representatives from 1856 to 1862. Throughout his life he remained a loyal democrat and a staunch episcopalian. We know that he actively served in Trinity Episcopal Church in Society Hill as a lay reader. It was in Trinity church that Major Lucas married Caroline Eliza McIver on November 21, 1861. Their daughter Elizabeth raised Dick Baird’s father, Andrew Tazewell Baird. Andrew was just two years old when his mother died and he went to live at Japonica Hall.

In 1865, Major Lucas and Caroline moved from Charleston to Society Hill where he served as director of the Cheraw and Darlington Railroad, and later the Atlantic Coast Line Railroad. He was also active on several boards and served as President of the Darlington Agricultural Society. Japonica Hall was built between 1896 and 1897 and was one of the first places in Darlington County where Camellia japonicas were planted.

Today the house has been lovingly restored and is listed in the National Register of Historic Places and marked by the Darlington County Historical Commission as a County Historical Site. Prior to its restoration, the house sat empty for 14 years and was overgrown with kudzu and wisteria.
Japonica Hall is a grand example of a Beaux Art-style residence. The two-and-one-half story over basement brick residence holds great architectural significance in Darlington County as it was designed by Charles Coker Wilson and William Augustus Edwards, noted South Carolina architects and sons of Darlington County.

The house consists of roughly 6,500 square feet of living space over a full basement. There are 16 rooms, and the ceilings are 12 feet high. As with any historic home, legends abound and it’s said of Japonica Hall that the bricks used in its construction were made in the old Society Hill Brick Yard and hauled to the site by wagon. We do know that the solid brick exterior walls are 18 inches thick and that the mortar between the bricks was colored to match them. The interior walls are also solid brick, 13 inches thick, and reinforced with steel rods. The floors and staircases in Japonica Hall are made from heart pine and the windows and outside doorways are marked with granite sills. Many of the rooms still have their original mantles from 1897.

Japonica Hall is nestled off Main Street in Society Hill among japonicas, American beech trees, southern magnolias, china firs, banana shrubs, and azaleas. The house stands as a reminder of the legacy of those who were born in the early 1800s. We know that during this period, Society Hill was the epicenter of culture in the Pee Dee region. The area is noted as having been the first settlement in Darlington County.

How befitting that Japonica Hall stands on such honored ground and represents such a golden age in local history. As an historian, I am always saddened at the lack of care and respect for historic sites. That cannot be said about this home. The Bairds have been excellent caretakers and Japonica Hall bears their mark. I applaud Richard (Dick) Baird for his love of local history and his commitment to seeing Japonica Hall preserved and lovingly cared for.