Also known as Macedonia Mission Baptist Church, this congregation was established on February 11, 1866, following the Civil War. Former slave Isaac Brockenton and 13 other members of First Baptist Church of Darlington left the white congregation to form their own church of the same denomination under the guidance of a northern missionary, Dr. Corey. As was the case with many early churches, the burgeoning congregation met under a brush arbor and in the homes of members before building a permanent sanctuary on the corner of Hampton and Russell (now South Main). 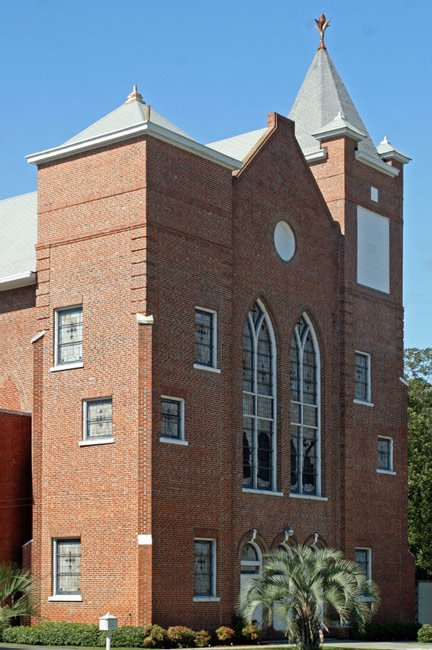 Legend has it that Brockenton placed a quarter on the offering table to indicate that it was time to build a house of worship. Though his gesture does not seem to have been taken seriously at the time, by the following year the first church structure had been built. Brockenton served as Macedonia Baptist Church’s minister until his death in 1908. The founding pastor was succeeded by the Reverend P.A. Callaham, whose efforts saw the church increase in membership. 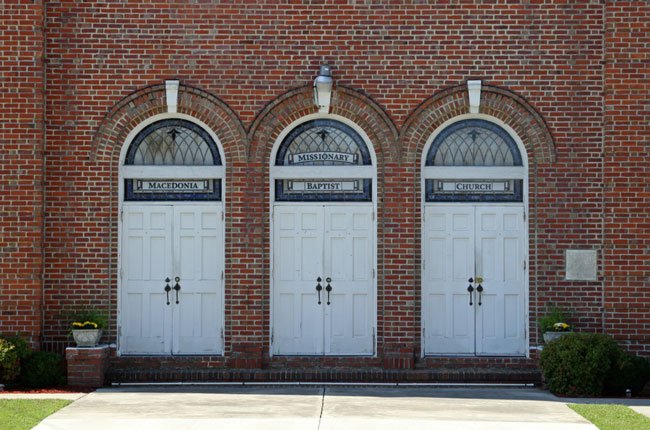 Following Callham’s tenure, Dr. James E. Kirkland led the church from 1919 until 1920. Under Dr. Kirkland’s guidance, the congregation began raising funds to buy the church’s present site in 1922. After Dr. Kirkland transferred to White Rock Baptist Church in Durham, North Carolina, in 1920, his replacement, Dr. C.D. Hubert, continued the campaign to build a new edifice. Though the vision was not fulfilled by the time he left in 1925 to assume the presidency of Morehouse College in Atlanta, Georgia, the congregation remained determined to realize its goal. 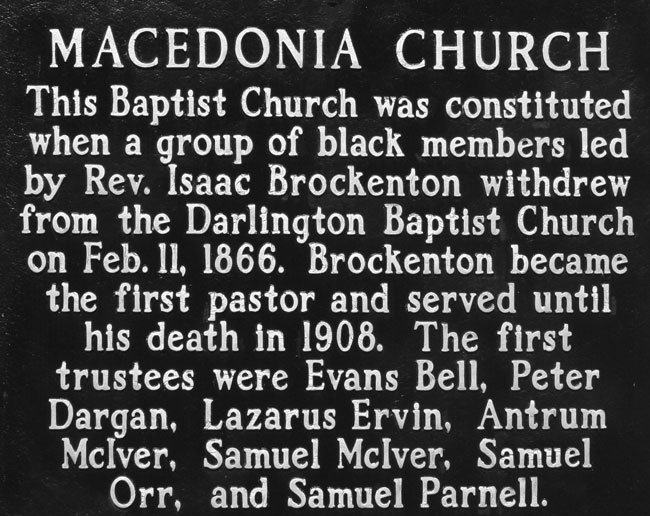 Finally under Dr. H.W Long, who served as pastor from 1927 until 1945, the current brick church was built. Members happily worshiped here for the first time on a bitterly cold morning on February 3, 1935, celebrating the decade of dedication it took to realize their dream. 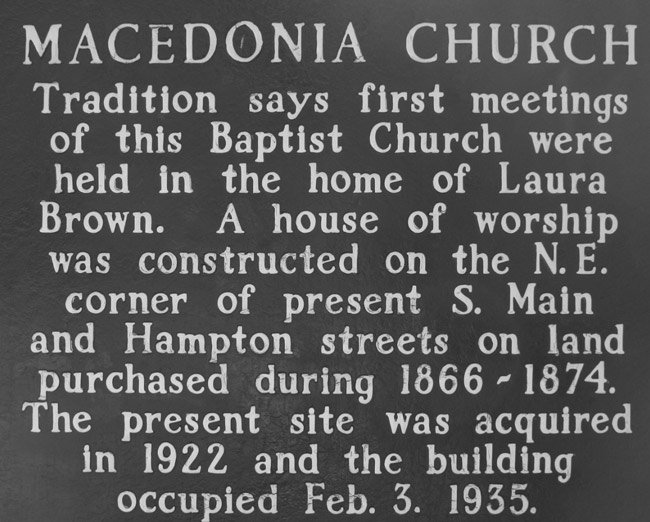 Macedonia Baptist Church also purchased five acres separate from the church building and laid it out as its cemetery in 1890. In 1946 two other local churches, Bethel A.M.E. and St. James Methodist, purchased two acres each adjacent to Macedonia’s tract. Together the nine acres became Darlington Memorial Cemetery, the first cemetery for African-Americans in Darlington. Darlington Memorial Cemetery is listed in the National Register:

The Darlington Memorial Cemetery, also known as the Darlington Community Cemetery or the Darlington City Cemetery, is significant as the first cemetery established for the African American community of Darlington and for its association with many prominent black citizens of the town from the late nineteenth through the twentieth centuries. It is also an intact example of a cemetery reflecting typical burial customs and gravestone art during this period. The cemetery dates from 1890, when the trustees of Macedonia Baptist Church Cemetery purchased a five-acre tract to establish a cemetery for members of the church and other members of Darlington’s black community.

Until 1946 it was the only African American cemetery within the city limits of Darlington. It was expanded by four additional acres in 1946 when the Bethel A.M.E. Church Cemetery and the St. James Methodist Church Cemetery were established and laid out adjacent to it, adding two acres each for a total of approximately nine acres. These three cemeteries are collectively known as the Darlington Memorial Cemetery, still the primary cemetery for the African American community in Darlington. There are approximately 1900 graves in the cemetery, with most burials dating from the early- to mid-twentieth century.

Remember last week I told you that we would come back to Darlington County? Venturing out wasn’t too bad, was it? If not, we’ll do it again someday. But to today we are back in Darlington County, even downtown Darlington. Much of this information was gleaned from [Macedonia Missionary’s] 145th anniversary service held in 2011.

Macedonia Missionary Baptist Church was organized on February 11, 1866 under the leadership of Dr. Isaac P. Brockenton. He and Dr. Corey were able to put together thirteen charter members from the First Baptist Church of Darlington in order to officially form Macedonia. They, like many other start-up churches of the time, first met under a “bushy arbor” or in private homes – anyplace where religious-minded people with a common goal could meet.

Dr. Brockenton was a believer; he had faith. He lived to see Macedonia build and occupy two buildings before his death in 1908. His typical practice was to tell his congregation that it was time to build a house of worship to the glory of God, and then he would place a lone quarter on the offering table. Within a year, after everyone stopping laughing, the members walked into a new house of worship. Maybe the building was nothing special, but it was theirs; they paid for it, they built it, they were proud of it. The first permanent structure was located on the corner of Hampton and Russell Streets in Darlington. Upon Dr. Brockenton’s death in 1908, the Reverend P.A. Callaham led the continuation of growth at Macedonia for the next eight years.

In 1916 Dr. James E. Kirkland came to inspire and motivate the Macedonia congregation. It was through his vision that the group was able to raise $2,500 in order to purchase land on the corner of South Main and Lee Streets, the church’s present location. Even though Dr. Kirkland stayed in Darlington for only four years, he left a group of people who were excited. The group witnessed what they were capable of if they worked hard, made sacrifices, and pulled together. When Dr. C.D. Hubert arrived in Darlington in 1920, his pastorate was made much easier because his congregation was fired up about progress and about building a new church. That inspiration resulted in the present building being started in 1922.

However, it was hard to ignore the existing economic conditions in the Darlington area with crop failure and unemployment. Progress with fundraising and construction on the new building was slow; as a matter of fact, it was almost nonexistent. With these hardships, Dr. Hubert was not able to see the completion of the building before he left Darlington to accept the presidency of Morehouse College in Atlanta. The economic hardships also provided a challenge in finding a new pastor for Macedonia; they were without a pastor for two years. Yet even with the apparent setbacks, they were not without leadership, as local elders provided the support needed to hold the congregation together until Dr. H.W. Long accepted Macedonia’s call in 1927.

Even with the continuing economic struggles and through the Great Depression of 1929, Dr. Long pushed forward, securing the adequate funding needed to jump start construction again on the dormant building process. With hammers swinging and bricks being laid again, progress continued to be slow, but progress was being made. By early 1935, even though not complete, the building had reached the point of construction where the anxious membership could worship in their building for the first time on Sunday February 3, 1935, thirteen years after the building’s foundation was laid.

Dr. Long continued to lead Macedonia until 1945, at which time the Reverend C.L. Bowens became the church’s sixth pastor. He and his wife were not just leaders of the church for 45 years, but their time in Darlington provided great leadership, and they proved to be role models for the entire community of Darlington. It was in the Reverend Bowens’ pastorate that the church building was completed with interior decorations, a central heating system, and many more physical plant improvements.

Macedonia Missionary Baptist Church continues to be vital part of the spiritual aspect of life in Darlington and into the surrounding areas. This strength is a direct result of the growth through trials and struggles experienced by the previous leaders and the entire congregation of Macedonia that has molded it into the example that the building represents today.